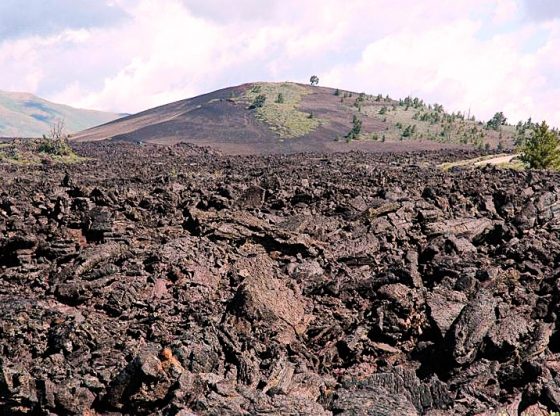 Craters of the Moon was first designated in 1924 and occupied 54,000 acres. In 2000, President Clinton expanded it more than ten-fold, to 700,000 acres. This monument in central Idaho is distinguished by its craggy basalt fields; remnants of ancient volcanic lava flows. Despite its hard and and sometimes-treacherous surfaces, ranchers have grazed the area for a century.

On July 13, the Interior Department released Secretary Ryan Zinke’s report on two national monuments which had been under review as a result of President Trump’s executive order (EO) of April 26. Trump’s directive was for a review of all national monuments created since 1996 through presidential application of the Antiquities Act, leaving open the possibility that the increasingly immense and controversial designations of the last twenty years would be subject to changes. According to the Interior Department’s press release, Zinke has determined that no changes will be made to either Washington State’s Hanford Reach, or Idaho’s Craters of the Moon National Monuments. The press release reads:

On Craters of the Moon, Secretary Zinke said, “As a former geologist, I realize Craters of the Moon is a living timeline of the geologic history of our land on the Great Rift. Whether it’s hiking up the alien-like lava flows along the Spatter Cones, or just driving through the scenic loop, there’s a lot to see and learn at this historic location.”

On Hanford Reach, Secretary Zinke said, “Sportsmen and women from all over the country go to Hanford Reach for some of the best fishing and bird hunting around. It’s also home to some of the most well-preserved remnants of human history in the area.”

Hanford Reach National Monument was designated via a Clinton presidential decree in 2000. Nearly 200,000 acres in size, these lands previously encompassed a buffer zone surrounding a nuclear materials production facility which was established in 1943 and decommissioned decades later. Currently governed by the U.S. Fish & Wildlife Service, Hanford Reach serves primarily as a wildlife refuge with some managed fishing and hunting allowed within its boundaries. As rehabilitated World War II era nuclear facility–once the site of 9 reactors–the creation of Hanford Reach National Monument has not been the subject of much controversy, but Craters of the Moon National Monument is a different story.

Craters of the Moon was first designated in 1924 and occupied 54,000 acres. In 2000, President Clinton expanded it more than ten-fold, to 700,000 acres. This monument in central Idaho is distinguished by its craggy basalt fields; remnants of ancient volcanic lava flows. Despite its hard and and sometimes-treacherous surfaces, ranchers have grazed the area for a century. But its expansion has lead to increased restrictions on grazing in parts of the monument, and there has been a recent push by politicians and activists in Idaho to redesignate Craters of the Moon as a national park. In July of 2015, Capital Press reported:

Advocates for creating a Craters of the Moon National Park insist their proposal would boost tourism to the scenic Eastern Idaho basalt flows simply by changing the names on signs.

Some local ranchers and Idaho Farm Bureau Federation officials, however, aren’t sold on upgrading the national monument’s status, concerned about new restrictions on grazing and shipping forage, or the possibility that its borders could expand.

The concerns of Idaho’s ranchers and farmers about the change of designation are not unfounded. Most national parks in existence today started out as national monuments, and it’s almost an expectation in the minds of environmental groups and federal land agencies that monument status is just the first step in a process towards full federal containment, and the reason for this is simple. National monuments can be created by executive fiat using the Antiquities Act, whereas national parks require congressional action. Once monuments are ensconced in the public eye as being set aside for ‘protection’ and recreation, the path leading to even more restrictive national park status is all downhill. The Capital Press article continues:

Idaho Farm Bureau leaders joined Craters Superintendent Dan Buckley on a tour of the monument in late June. Farm Bureau spokesman John Thompson said the organization remains concerned the change could open the door for the federal government to later restrict grazing, or charge a fee for highway access, despite Buckley’s assurances that the highway is state-owned and both scenarios are unlikely.

“They have very good intentions, but good intentions don’t get you that far when you’re dealing with a bunch of bureaucrats in Washington, D.C.,” Thompson said. He said Farm Bureau will wait for county chapters to vote on the issue before taking a formal position.

“Every year we see recreation interests putting pressure on grazing, and then the Forest Service or BLM will reduce grazing,” Thompson said.

Sheep rancher Henry Etcheverry opposes the change, worried he’d lose half his herd if his grazing access to the monument were restricted. Etcheverry said he was barred from grazing in the monument’s Bear Park area shortly after the 2000 expansion.

“I don’t trust (the federal government) at all,” Etcheverry said. “I think they would take away our grazing rights.”

Many in the West are rightly worried that Zinke’s inaction on Craters of the Moon may signal an unwillingness on his part to fight against the powerful tide of environmentalist and political influences driving media narratives about public lands. It’s possible that the sheer ruggedness and inaccessibility of Craters of the Moon is factored into Zinke’s conclusion. However, if the Interior Department remains faithful to the President’s order, those monuments created or expanded since 1996 must be seriously addressed, and reworked in both the spirit and letter of the Antiquities Act, as per the text of the April 26 EO, which reads in part:

By the authority vested in me as President by the Constitution and the laws of the United States of America, and in recognition of the importance of the Nation’s wealth of natural resources to American workers and the American economy, it is hereby ordered as follows:

Section 1.  Policy.  Designations of national monuments under the Antiquities Act of 1906, recently recodified at sections 320301 to 320303 of title 54, United States Code (the “Antiquities Act” or “Act”), have a substantial impact on the management of Federal lands and the use and enjoyment of neighboring lands.  Such designations are a means of stewarding America’s natural resources, protecting America’s natural beauty, and preserving America’s historic places.  Monument designations that result from a lack of public outreach and proper coordination with State, tribal, and local officials and other relevant stakeholders may also create barriers to achieving energy independence, restrict public access to and use of Federal lands, burden State, tribal, and local governments, and otherwise curtail economic growth.  Designations should be made in accordance with the requirements and original objectives of the Act and appropriately balance the protection of landmarks, structures, and objects against the appropriate use of Federal lands and the effects on surrounding lands and communities.