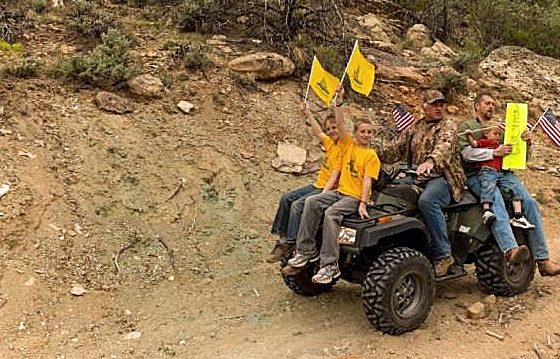 New documentation revealed in recent meetings between Utah leaders, and Phil Lyman and Monte Wells, the two men convicted by a federal court on ‘conspiracy’ and ‘trespass’ charges related to the 2014 ATV ‘protest’ ride in Recapture Canyon, proves that the road in question is indeed a county road, and has never been under the jurisdiction of the federal Bureau of Land Management (BLM). At the time of their sentencing, Fox13now reported:

SALT LAKE CITY – A county commissioner who led a protest ride into southeastern Utah’s Recapture Canyon was sentenced to serve 10 days in jail.

The judge also banned Lyman from encouraging others to break laws on federal lands.

“I’m going to impose a prohibition against advocacy of land use law violations,” Nuffer said.

Lyman will be allowed to self surrender to serve his 10 days behind bars sometime in April at Washington County’s Purgatory Jail. He and co-defendant, Monte Wells, will have to pay $96,000 in restitution. Wells was sentenced to five days in jail.

Lyman and Wells were convicted by a jury for their roles in the May 10, 2014 protest ride in Recapture Canyon, where people drove ATVs through the area in protest of federal road closures. The area had been closed off by the BLM. Federal prosecutors claim Lyman organized the protest and Wells publicized it.

Speaking to the judge, Lyman was emotional as he described the problems that San Juan County faces and the frustration people have with the federal government.

“I feel like I’m a reasonable person, but as an elected official, I hear the concerns,” he said.

“This was not an anti-government rally,” Lyman told the judge. “I love the federal government.”

In the following video, Monte Wells, the blogger and former Monticello City councilman who served a 5-day federal sentence for his role in the Recapture protest ride, gives a point by point account of how this new evidence proves that the BLM’s claims of jurisdiction, and subsequent convictions of the two men on federal charges, were erroneous.

The Recapture Canyon trial was based on faulty evidence and misrepresentations presented by federal prosecutors and BLM agents, as well as apparent bias on the parts of the judges (4 recusing and the 5th, David Nuffer, whose daughter is an environmental activist). Wells makes the following points in the video:

♦Trial transcripts indicate that the first judge to hear the case, US District Judge Shelby, made the following statements:

“… insofar as what you mean by being an illegal ride, that the closure was legal and is a legal issue.”

“I agree, it is purely a legal issue and it’s been decided by the Court. You raised it, we discussed it in the final pretrial conference, and I made a ruling. It is a legal closure. This road is closed by the BLM legally and lawfully for purposes of this trial. ”

Shelby made this determination with no factual basis and without allowing the defense to present  evidence to the contrary.

♦Shelby’s ruling empowered the US Attorney’s Office to execute their case, which was based on false and fabricated information and statements by BLM officials. Prosecution documents and statements created the illusion that the Recapture Road was the property of the Bureau of Land Management and therefore they possessed the authority to close it. This is factually inaccurate and it appears that the BLM, as well as the US Attorney, knew it to be wrong. It’s also possible that Judge Shelby was aware of this fact, and that is why he disallowed the defense to present evidence to the contrary.

“And through the evidence you will learn that it was in 2007 the BLM, using the authority granted to it by Congress, closed this canyon to off-road or motorized vehicles, and they did so to protect those artifacts, those cultural resources.”

♦US Attorney Jared Bennett and Jason Moore, Utah’s head BLM Law Enforcement Officer (LEO), stated that the road in Recapture was there for the San Juan County Water Conservancy District.

♦Referring to the Recapture Road, trial transcripts recorded the following incorrect statements made in a dialogue between LEO Moore and US Attorney Bennett:

Moore: “After the closure sign there is a two-track road which goes for approximately one mile to a turnaround or kind of just a big clearing, and then the road ends.”

Moore: A-“That two-track road is there for the San Juan Water Conservancy District to access the pipeline”

♦On December 12, 2010,  the BLM ask San Juan County if it was interested in having a Right of Way (ROW) for the Water Conservancy District to maintain the 27” water pipeline that was installed in 1986 and runs down Recapture Canyon. The ROW for the pipeline did not include an access road because they assumed they would use the existing San Juan County Road D-5314.  The placer miner in Recapture got a ROW to his mine that connected with the existing county road. The BLM recognized the existing county road as an RS-2477 road.

♦The ROW for the pipeline indicated the existing county road would be used to maintain the pipeline, and no title 5 was needed. Maxine Deeter started trying to create a paper trail for the BLM in 2010, justifying the Road closure. She attempted to say that the road was not authorized until Norman Johnson of the Water conservancy pointed out that, “The grant states that no new access would be constructed, but County and existing roads would be used.”

♦At the time of the 2007 closure there was no title 5 road ROW in the canyon, only the existing RS-2477 county road. The county road is over 100 ft or more from the location of the pipeline which indicates it was not constructed for the pipeline.

♦Despite the fact that the BLM did not own County Road D-5314 the agency closed it illegally in 2007.  The BLM was aware of this fact as illustrated by Maxine Deeter’s correspondence with Norman Johnson.

♦In transcripts from the trial, it is apparent that U.S. Attorney Jared Bennett and Jason Moore was aware of this fact, but continued to mislead the court:

Moore: A-“That two-track road is there for the San Juan Water Conservancy District to access the pipeline.”

Bennett: Q- “Do they have special permission from the BLM to access that pipeline?”

Bennett: Q-“And that pipeline is in the closed area?”

US Attorney: Q-“On May 10th, 2014 was Recapture Canyon still closed for recreational motorized use?”

♦Federal Prosecutor Bennett stated in closing arguments to the jury:

“But the defense will say just a second. Yesterday we put up a defense — a defense witness named Ferd Johnson. And Ferd Johnson, according to what he testified to, told Mr. Lyman in March of 2014 that it was okay with him if Mr. Lyman and his protest riders used the right-of-way that the Water Conservancy District has up Recapture Canyon.

So whatever Mr. Johnson testified to about a good faith belief about permission, to the extent that conversation ever happened, which I don’t think it did, but that doesn’t matter, Mr. Lyman didn’t believe it. He did not have a good faith belief that he did not — should not be operating his ATV in the closed area. Therefore, Mr. Lyman, Mr. Wells, Mr. Holliday and Mr. Marian all operated their ATVs in an area closed to such use, willfully and knowingly, and you should find them guilty for it.

Therefore, Mr. Lyman, Mr. Wells, Mr. Holliday and Mr. Marian all operated their ATVs in an area closed to such use, willfully and knowingly, and you should find them guilty for it.”

♦Bennett had BLM employee Daniel Webb sign a statement indicating there was no RS-2477 road in Recapture, yet his job as cadastral person only deals in boundaries, not the roads in the area.  And he confirmed his lack of comprehensive road jurisdiction knowledge in the recent meeting with Utah leaders, and  Lyman and Wells. Nevertheless, the court used Webb’s statement as a basis for denying the defendant’s request for a new trial (see Declaration of Daniel Webb in linked document file).