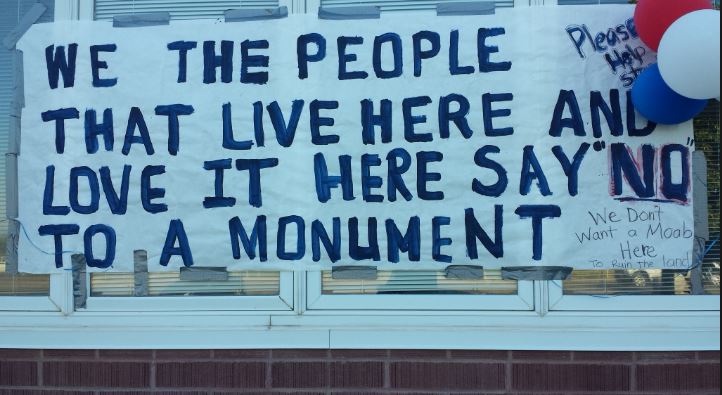 It’s worth noting that the areas targeted by Obama in his waning days, including Bears Ears, Gold Butte, Nevada (the location of the Cliven Bundy family ranch), Cascade-Siskiyou, on the border of Northern California and Oregon, and others, are rural strongholds; red regions rich with highly-coveted natural resources, and populated by ranchers, farmers, and others with ties to the lands.

Utah’s senior senator, Orrin Hatch, visited San Juan County, Utah, last week, to meet with elected leaders and members of local Native tribes to discuss the future of the Bears Ears National Monument. Despite overwhelming opposition from residents of San Juan County, and the state of Utah generally, Obama announced the designation on December 28, 2016, while on vacation in Hawaii. Hatch’s official press release seems to confirm that, one way or another, Obama’s 1.3 million acre federal land grab will not stand. It reads:

In recent months Senator Hatch has held multiple meetings with President Trump and Interior Secretary Ryan Zinke to discuss Bears Ears, and potential plans for altering the monument in a way that conserves and protects the sacred parts of the land while ensuring local leaders have some say in managing them.

“When President Obama designated the Bears Ears monument in December, he did so ignoring the voices of Utah leaders who were united in opposition, and even more importantly, ignoring the voices of the local Utahns most affected by this massive land grab,” Hatch said. “Following my conversations with President Trump and Secretary Zinke about next steps in addressing the mess this monument created, I look forward to meeting with a number of local leaders today to ensure that their voices are involved in the process moving forward.”

In his video, Hatch makes it clear that Utah’s congressional delegation, spearheaded by Representatives Jason Chaffetz and Rob Bishop, are committed to resolving the Bears Ears controversy in a way that benefits the local Navajos who depend on the resources within the designated monument, and whose ancestors have managed and lived off the lands for centuries.

Senator Hatch’s visit to San Juan County coincided with the White House announcement that President Trump was ordering an executive review of all federal land designations over the past 2 decades, reaching back to 1996 and Clinton’s secretive action which locked up 1.7 million acres of resource-rich lands in Central Utah in the Grand Staircase-Escalante National Monument. Last week the Salt Lake Tribune reported:

President Donald Trump this week will order a review of national monument designations — including southern Utah’s Bears Ears and Grand Staircase-Escalante — as part of a wide look at a century-old law that allows presidents to set aside federal lands without congressional approval.

On Wednesday, Trump will sign an executive order to demand that the Interior Department secretary examine all national monument designations in the past 21 years to discern whether their size and scope are within the law’s intent, a move that tracks clearly with concerns of members of Utah’s federal delegation about the use of the unilateral presidential power in designating monuments.

A senior White House official, who was not authorized to speak publicly, told The Salt Lake Tribune on Sunday that the review will stretch back a couple of decades — including President Bill Clinton’s 1996 naming of the Grand Staircase-Escalante National Monument — but mainly was prompted by President Barack Obama’s last-minute naming of Bears Ears National Monument in December.

The order is not expected to change the designations immediately but has a short time frame for the Interior Department to report back on the designating of monuments back to Jan. 1, 1996. Clinton had named the nearly 1.9 million-acre Grand Staircase in September 1996.

Many of Utah’s top federal and state officials have called for a rescission — or at least a resizing — of the Grand Staircase and Bears Ears monuments.

While no president has attempted to withdraw a monument named by a predecessor, there have been those who have scaled back those designations.

Utah’s firebrand representative, Jason Chaffetz, made a surprise announcement last week that he would not seek another term in Congress. Although Chaffetz indicated his decision was based on the well-being of his family, and his belief that elected officials should not hold careers in government, he remains a vocal opponent to Utah’s monument designations, and appears to be working with Hatch and President Trump to repair  damage the designations have caused to resource-dependent towns and residents. Chaffetz has sponsored legislation that decreases federal control over public lands, and which strips federal management agencies of policing powers where local law-enforcement should have jurisdiction over crimes which occur on public lands, and in land disputes.

Prior to his confirmation, in January, Secretary of Interior, Ryan Zinke, promised the people of San Juan County that he would visit the area, and listen to suggestions about how to address the national monument and help restore local control and access to essential resources impacted by the federal designation.

But Trump’s executive review of national monuments reaches across the country, as well as back in time, with a particular eye on the economically-harmful fallout of Obama-era monuments, created through his unilateral use of the Antiquities Act.

It may be worth noting that the areas targeted by Obama in his waning days, including Bears Ears, Gold Butte, Nevada (the location of the Cliven Bundy family ranch), Cascade-Siskiyou, on the border of Northern California and Oregon, and others, are rural strongholds; red regions rich with highly-coveted natural resources, and populated by ranchers, farmers, and others with ties to the lands. These are the people in the counties which sent Trump across the finish line in his bid for the White House. As Obama unjustly used executive power to remove a half-billion acres of land and ocean from the hands of the people, the hope remains that his successor will use executive power to justly restore those lands, waters and resources, back to the people.