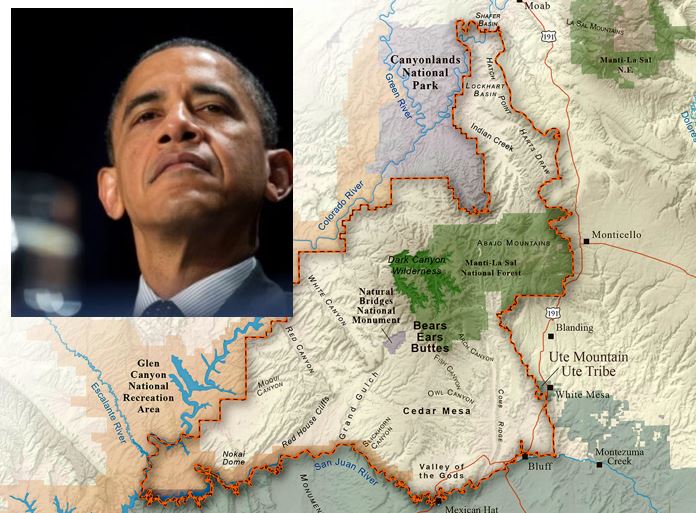 If there is a public lands deep state, it would be composed of holdover groups such as the Bears Ears Commission. With an agenda which was effectively neutralized on November 9, 2016, their members have grown roots into the soil of federal overreach, and will not be easily rooted out.

On June 12, Interior Department Secretary, Ryan Zinke, issued his interim report on the status of the Bears Ears National Monument (BENM), in which he recommended a reduction of its nearly 1.5 million-acre expanse. His recommendations included possible smaller, specific Antiquities Act designations within the existing boundaries. Zinke also recommended that the ‘promise’ made to local Native American groups of tribal co-management of the new national monument, be encoded in law by Congress.  Since there is no existing basis nor precedent for ‘tribal co-management,’ as it stands, the idea of tribal co-management remains an empty promise which was originally put forth to gain the support of reluctant tribal chapters for Obama’s vast land grab. But everything, at this point, is subject to change, and ultimately, Congressional action. Nevertheless, some groups are forging ahead–fueled by denial and financial interests–as if no Antiquities Act Review were in process, and the Bears Ears Monument will remain forever the massive federal enclave created at the behest of governmental and non-governmental environmentalist ideologues, and consummated in one penstroke by the former Chief Executive.

The 23rd Navajo Nation Council, Office of the Speaker, issued a June 19 press releases titled, “Delegate Filfred and Bears Ears Commission continue developing Bears Ears National Monument management plan.” The release makes it clear that this commission is continuing with ‘business as usual,’ as if the former administration were still in control of the process. The ‘Bears Ears Commission (BEC),’ established by Obama, weirdly marches on with their Obama-approved agenda, despite the certainty that with the new Administration, Presidential and Congressional changes to the existing ‘management plan’ will be made. The Navajo Council press release reads begins with:

According to the proclamation signed by former President Obama, the Bears Ears Commission
was established to provide guidance and recommendations on the development and
implementation of management plans, and on management of the monument. The commission
consists of one elected official from the Navajo Nation, Hopi Nation, Ute Mountain Ute Tribe, Ute
Indian Tribe of the Uintah Ouray, and Zuni Tribe, designated by the officers’ respective tribes.

If there is a public lands deep state, it would be composed of holdover groups such as the BEC. With an agenda which was effectively neutralized on November 9, 2016, their members have grown roots into the soil of federal overreach, and will not be easily rooted out. In fact, Filfred makes it clear that their agenda will not be impeded by such trifling things as a new administration with a vastly different philosophy than that of the previous power structure. Filfed said:

Delegate Filfred said that although Secretary of the Interior Ryan Zinke may issue a
recommendation to repeal the national monument designation, or downsize the land area of the
park, the Bears Ears Commission and advocacy organizations will continue aiding in developing
the national monument management plan.

“The Bears Ears National Monument is still a monument and we need to treat operations as
‘business as usual,’ because regardless of what federal officials may recommend we have to keep
pushing forward the management plan,” said Delegate Filfred. “We also need the people who
support the monument to continue sending in public comments supporting Bears Ears.”

For accuracy, it’s important to note that local tribal chapters in the region of BENM oppose the monument designation. Obama’s Bears Ears Commission is not a Native American advocacy group, but rather a collection of like-minded tribal members formed from the ‘conservation’ group, Utah Dine Bikeyah, which was originally organized by mostly white corporate environmentalists with extreme agendas and financial interests. Filfred, the Navajo delegate to the BEC, posted this photo on June 28.

Davis Filfred, in fact, lives in Red Mesa, Arizona, which is far south of the designated boundaries of the Bears Ears National Monument, where he may reap the acclaim, but never have to live with the implications of a 1.5 million-acre land grab defined by federal restrictions, and the deficiencies of a tourism-dominated economy.

This rogue, Obama-era holdover group, is indeed a self-guided missile launched from the deep-state, and a March 17, 2017 letter from BEC to Secretary Zinke exposes the degree of its disdain for opinions and agendas other than its own. The letter reads:

This letter is to inform you that the Bears Ears Commission, which was established in President
Obama’s Bears Ears National Monument Proclamation, is now fully constituted.

In ‘you’re not the boss of us’ fashion, it goes on:

Now that our Commission has been fully constituted, we are most anxious to meet with agency
officials in the field and, as mentioned, Secretary Zinke during his Utah visit. These will be
opportunities to begin discussions on fulfilling the promise of this historic opportunity to create a
unique and highly productive system of collaborative management.

We have heard reports that the Trump Administration may be considering actions to reduce the
size of the monument or to eliminate it entirely. If that is correct, we would consider it essential
that we are able to have full discussions with you about those possibilities. Of course, from our
standpoint, any such actions would be absolute tragedies in terms of impacts on our people today
and the eternal values and traditions of our many generations of ancestors. Needless to say, if
such actions are not being considered, than the meetings would be extraordinarily productive in
terms of starting to put in place a system of collaborative management that would make this
monument one of the brightest stars in America’s public land system.

Will news that the BEC is going forward on the basis fantasy and wishes, Free Range Report feels it necessary to give the Bears Ears debate a reality check. In Interior’s own press release on the Interim Report, Secretary Zinke stated:

“I spent a lot of time on the ground in Utah, talking with people and understanding the natural and cultural significance of the area. There is no doubt that it is drop-dead gorgeous country and that it merits some degree of protection, but designating a monument that – including state land- encompasses almost 1.5 million-acres where multiple-use management is hindered or prohibited is not the best use of the land and is not in accordance with the intention of the Antiquities Act.”

BEC, and its compatriots must remember that the Trump Administration, unlike Obama’s and other previous administrations, is interested in the correct application of the law. The premise of environmentalist groups like BEC, has been that the use of the Antiquities Act to lock up hundreds of millions of acres of productive lands in the name of ‘preservation’ is an end that is worth the means no matter how destructive to human interests. The problem with this notion is that it contradicts the intent and actual language of the environmentalists’ weapon of choice, the Antiquities Act.