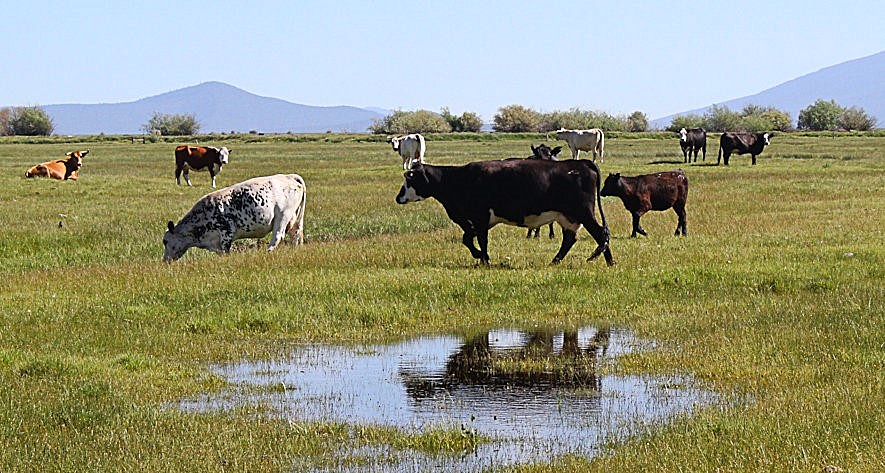 In April 2014, ranchers and the Tribes signed the Upper Basin Comprehensive Agreement. The ranchers agreed to retire 18,000 acres of land or 30,000 acre feet of water and do riparian repair work on the rivers in exchange for an allotment of water each year…

At the end of February, the Tribes indicated to the ranchers they wanted to terminate the agreement…

There are few options for the Upper Klamath Basin ranchers who are now under a call for water from the Klamath Tribes, just as irrigation season is fast approaching.

The ranchers believe their livelihood is at stake and so may be much of the economy for the county. The issue affects some 300,000 acres of land and 1,000 or more ranchers north and east of Klamath Falls.

Two weeks ago, the Tribes called on its water rights for “flood plain” water on the Sprague and Williamson Rivers, which are running high due to spring runoff. The Wood River is under the same call, which is expected to take effect Monday, experts predict. All three feed into Upper Klamath Lake.

The Tribes have primary water rights, which supersede any secondary rights of the ranchers and irrigators.

The Herald and News was unable to get a comment from the tribal chairman for this story, but Chairman Don Gentry has said in the past the call was necessary now to benefit fish habitat in high water zones, basically flushing out the river to allow for new growth. That will help endangered fish, such as Lost River and short-nosed suckers, downstream.

The ranchers say that by June or July, pastures will be turning brown and those without underground wells and adequate stock water for cattle will be forced to ship cattle elsewhere for forage, an expensive proposition.

Ranchers hope to get the Tribes to either remove the call, or return to the bargaining table and hammer out a deal that would benefit both sides. Also, the state could join the negotiations or Congress could step in to help by pushing legislation to resolve the issue.

Those who have their water shut off, may file an appeal with the watermaster, which would put a hold on the shutoff unless the state rules otherwise. That could buy some time for the ranchers and the upper Basin irrigators are exploring that avenue.

Any federal appeal, such as seeking an injunction to the call, would be a costly proposition, experts say.

“This would not have happened if the unprecedented agreement (KBRA) produced by tribes, irrigators and conservationists had not been blocked. I stand ready to put in the work again to resolve this longstanding issue with an agreement that addresses the long-term needs of all the parties,” said Sen. Ron Wyden, D-Ore., in an email.

(One reason the bill failed was it was tied to removal of four hydroelectric dams on the Klamath River. Congressmen in Northern California were opposed to the dam removal).

Andrew Malcolm, spokesman for Rep. Greg Walden, said, “This shows the continued need for a long-lasting solution in the Basin. Greg’s been working on these issues a long time, and continues to work with stakeholders to find a solution that has the needed support with the public and in Congress.”

What the call means

A few of the ranchers and irrigators met with the Herald and News editorial board last week to lay out their concerns.

In April 2014, ranchers and the Tribes signed the Upper Basin Comprehensive Agreement. The ranchers agreed to retire 18,000 acres of land or 30,000 acre feet of water and do riparian repair work on the rivers in exchange for an allotment of water each year. That pact was linked to the Klamath Basin Restoration Agreement (KBRA) for the lower basin that eventually failed to gain congressional approval. Without it, the agreements had no money to be carried out.

At the end of February, the Tribes indicated to the ranchers they wanted to terminate the agreement, but have yet to file formal notice of termination with the Interior Department.

“Last year, we worked under the agreement and there was no call,” said Larry Nicholson, a fourth-generation Forth Klamath rancher. He’s also a member of the Klamath Tribes. “Now there is no communication with the Tribes, and everything just fell apart. We have nothing else to give.”

The way the call works is: Any amount of water flowing above 2,190 cfs can be called on by the tribes; When flows get down to 2,190 cfs, the call ends and irrigators will be able to irrigate again. When flows hit 1,440 cfs the water is shut off for the summer.

So, once ranchers are able to turn the water back on, nearly all of them will begin irrigating as fast and as much as possible. Some experts say that could be a short window of just a couple of days to a couple of weeks.

“On the Wood, this a straight up call to shut the whole Wood River down for the summer,” said Larry Nicholson. “Unless we can come up with an agreement, it will be like a domino effect and the Wood River will be the first one to fall.”

Roger Nicholson, a cousin of Larry’s, also has a longtime family ranch in the valley.

“It is going to start hurting shortly. These are Draconian instream flow levels. What adjudication has meant for us is a taking of our water,” he said. “We’re the whipping boy now.”

The economic impacts could be “a $1 billion hit” Roger Nicholson predicts. Not only will Klamath County suffer, the region will suffer, he said.

“We send cattle to the San Joaquin Valley for feed; we send them to the state of Washington as feeders and for the packing industry. I send 7,000 head alone. All that could go away,” Nicholson said. Plus, the ripple effects will be felt across the county, he warned.