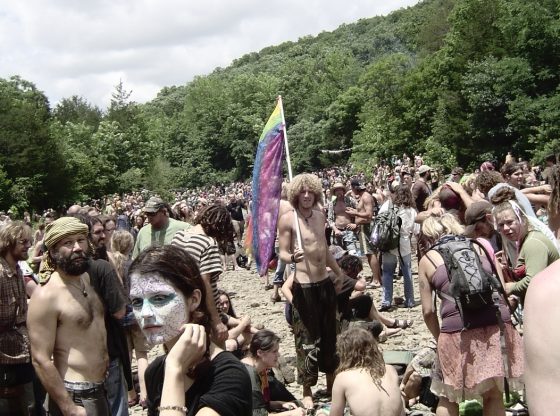 He said the Forest Service would punish ranchers if they ignored permit requirements and tapped a spring for drinking water like the Rainbow Family has done. Stout said it took him two years to get a National Environmental Policy Act permit to drill an exploratory mining hole.

The U.S. Forest Service acknowledged there isn’t much it can do about a “Rainbow Family” gathering expected to bring thousands of counter-culture types to the Malheur National Forest in Eastern Oregon over the next two weeks.

The organizers don’t have a permit, and the Forest Service’s response to that has angered area residents such as rancher Loren Stout, who lives near the gathering spot and has a federal grazing permit on land adjacent to it.

He said the Forest Service would punish ranchers if they ignored permit requirements and tapped a spring for drinking water like the Rainbow Family has done. Stout said it took him two years to get a National Environmental Policy Act permit to drill an exploratory mining hole.

“People are furious over this,” Stout said. “Not because it’s a friggin’ bunch of hippies, it’s the different standards.”

An estimated 500 to 700 people have already set up camp at Flagtail Meadow off of Forest Road 24, near the towns of Seneca and John Day. The 46th annual National Rainbow Gathering could draw 15,000 to 20,000 July 1-7, and is being held without a permit required of anyone else who would want to stage such an event on federal forest land.

Ryan Nehl, deputy Forest Service supervisor on the Malheur and the agency administrator for the event, planned to take a permit form to organizers at the gathering spot June 21.

“I don’t have a lot of faith they will sign it,” Nehl said. In that case, the Forest Service will impose an operational plan for the gathering to follow, and could take action if those conditions are violated.

But Nehl said the Forest Service will not attempt to stop the gathering.

“It’s a risk-based decision,” he said. “To try and kick them off the land would present a danger to employees and the public.”

The event is put on by the Rainbow Family of Living Light, a loosely-organized group that annually picks a spot for its gathering and invites like-minded people to attend for multiple days of music, camping, dancing and communal hanging out. The gatherings have been held since the 1970s.

On a Facebook page set up for this year’s event https://www.facebook.com/groups/246284825703234/, one person posted, “If we were in control we would all have free energy, everyone would be housed and fed and we’d be having song circles every day.”

“What is the pants policy at this event?” another poster asked. He was assured that nudity should be expected.

In other postings, people urged fellow “family” members not to upset locals by panhandling or “gas jugging,” meaning to beg for gasoline. Others caution against “spanging,” a slang reference to asking for spare change. A stabbing among Rainbow members during a meeting in the Umatilla National Forest earlier in June has area residents worried about what the larger gathering will bring.

A community meeting was scheduled June 23, in John Day to let residents ask questions of Forest Service and law enforcement personnel. The meeting is from 5 p.m. to 6:30 p.m. in the Juniper Hall Conference Room of the Malheur National Forest Headquarters, 431 Patterson Bridge Road.

The Forest Service mobilized an incident command team that includes 30 agency law enforcement officers from around the country, and has marked areas such as creeks that campers should stay out of. Oregon State Police, BLM officers, Grant County sheriff’s deputies and John Day police are available to help the incident team, Nehl said.

Meanwhile, rancher Stout said the Forest Service is “trying to put grazers out of business” but lets the Rainbow bunch do what they want. He said the gathering spot is a major Native American archaeological site and the area has eight springs that could be damaged.

He said the “takeover of federal ground” is no different than the Bundy group’s occupation of the Malheur National Wildlife Refuge headquarters. “I hate to say that,” Stout said.