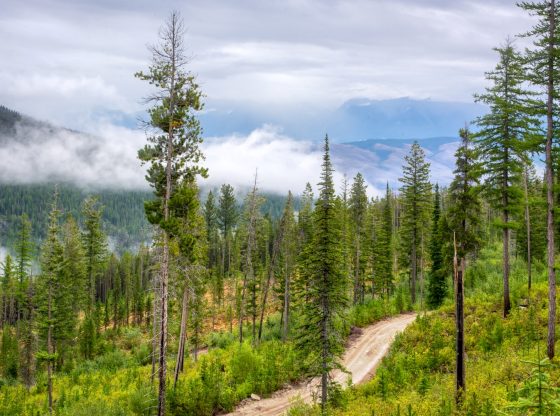 “…it’s critical to also fix the greater problem of mismanaged federal land that is keeping local communities in western Montana from responsibly managing their natural resources and growing their economies.

Hard-hit rural Montana counties that are the richest in timber are also among the poorest in the state, and stakeholders say major shortcomings in federal land management is at the root of the crisis.

On June 2, during a roundtable discussion at F.H. Stoltze Land and Lumber Company in Columbia Falls, U.S. Sen. Steve Daines, R-Montana, and U.S. Sen. Pat Roberts, R-Kansas — both major policy leaders in land management issues — heard from county leaders and wood products industry officials who bemoaned the current state of federal land management, the loss of jobs and the flurry of litigation that derails timber sales.

Roberts, who chairs the Senate Agriculture, Nutrition and Forestry Committee on which Daines also serves, was in Montana for the two-day Ag Summit in Great Falls to talk national farm policy with Agriculture Secretary Sonny Perdue.

But Montana’s junior senator said he wanted the chairman to hear concerns firsthand from stakeholders in an industry that is often overlooked in Washington, D.C., where members of Congress aren’t well versed in the business of trees.

“We’re a pinprick in this country when it comes to political clout,” said Chuck Roady, president of Stoltze, a century-old, family owned timber company that prides itself on managing healthy, productive forests.

In Montana, timber is very much a part of the local lexicon, particularly in resource-dependent communities like Lincoln, Sanders, and Mineral counties, where broad swaths of tax-exempt federal land once fed local sawmills.

Angelo Ververis, manager of Tricon Timber Mill in St. Regis, said Mineral County is struggling to fill its coffers in the face of the sluggish pace and scope of active forest management.

“Our county is broke. Flat broke, and we’re struggling,” Ververis said. “The big thing is community. I’ve got a kid who just graduated from Superior High School and he’s going to go some place else to work.”

Those communities are dependent on programs like Secure Rural Schools (SRS) and Payments in Lieu of Taxes (PILT), both of which remain in doubt under President Donald Trump’s proposed budget.

He said the last payment from SRS was more than $900,000, most of which was spent on roads.

Daines said he’s working on bipartisan legislation that would extend authorization for SRS payments for two years and add retroactive payments for 2016.

But, he added, it’s critical to also fix the greater problem of mismanaged federal land that is keeping local communities in western Montana from responsibly managing their natural resources and growing their economies.

Flathead County Commissioner Pam Holmquist echoed Daines’ sentiment, as well as those of the other exasperated members of the roundtable talk, most of whom blamed the specter of litigation as an impediment to management agencies like the U.S. Forest Service.

“We would just as soon not be dependent on Secure Rural Schools but that is the reality of life until we find some way for tort reform so we are not in the courts all of the time, and give the people suing us some skin in the game because we are the ones who pay their legal bills,” she said. “We need timber management.”

Paul McKenzie, the land and resource manager at Stoltze, said sound forest management is being eclipsed at the federal level by a brand of decision-making motivated by a desire to avoid litigation.

He added: “How do we empower the Forest Service to do the right thing and manage our federal lands?”

Most recently, the Flathead National Forest withdrew its Decision Notice for the Cold Jim Fuels Reduction and Forest Health Project in the Swan Valley after conservation groups threatened to sue over impacts to bull trout and bull trout critical habitat.

Friends of the Wild Swan, Swan View Coalition, Alliance for the Wild Rockies and Native Ecosystems Council notified the Forest Service and the U.S. Fish and Wildlife Service in November 2016 that it would file a lawsuit because the project violated the Endangered Species Act due to impacts to lynx, grizzly bear, fisher, wolverine and bull trout. In response to the notice of intent to sue the Fish and Wildlife Service conducted a more in-depth review and determined that the project was “likely to adversely affect” bull trout and critical habitat in Cold and Jim Creeks.

Previously the Fish and Wildlife Service concurred with the Forest Service’s determination that the project “would not adversely affect” bull trout and critical habitat.

“It is ironic that the agencies were fine with this project until we raised concerns and threatened to sue,” said Arlene Montgomery, program director for Friends of the Wild Swan. “Once they went back and fully analyzed the project they determined it would indeed adversely impact bull trout. This is why citizen oversight is so important.”

In an ecosystem where litigation is a commonly used tool, Flathead Forest Supervisor Chip Weber said it takes time and effort to navigate the bureaucratic red tape when advancing a timber sale, even if a project is well-designed and the product of a collaboration of stakeholders.

“Usually the projects are well designed. But we have layer upon layer of laws and regulations that we have to meet, and we have court interpretations of those. And we do our best to meet all of that,” Weber said. “Sometimes we get new interpretations and that changes our information, and we’re frequently challenged on these things. So we have to make sure whenever we come forward with a decision that we have one that we believe will be able to sustain objectives and litigation.”

Dan Claridge, director of Thompson River Lumber Co., the second largest employer in Sanders County behind the hospital, said his mill isn’t fully operational because “all of the timber sales are tied up” in the appellate courts.

“The Kootenai National Forest is our backyard and we’ve got no sawmills,” he said. “What are we supposed to do?”