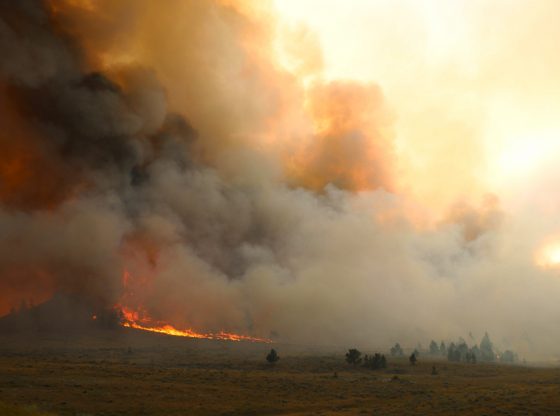 “It’s not negligence,” Harris says. “That’s what people keep thinking but that’s not what it is. It’s people with responsibility like team leaders in the firefighting groups that have to make decisions on how they can deal with Wilderness Study Area boundaries.”

The largest wildfire in the U.S. this year burned in Montana, decimating 423 miles of fertile rangeland, and with it, the livelihoods of many Garfield and Petroleum County ranchers.

Republican State Representative Bill Harris of Winnet was one of them. Harris documented much of the disaster that destroyed his ranchland on his personal Facebook. He’s pointing the finger at a nearby Wilderness Study Area (WSA) managed by the Bureau of Land Management as contributing to overall fire devastation.

While he acknowledges that a lightning storm ignited the blaze amid an exceptional drought, he is criticizing the unique rules that govern federally-maintained WSAs, alleging that they caused hesitation among fire managers.

“It’s not negligence,” Harris says. “That’s what people keep thinking but that’s not what it is. It’s people with responsibility like team leaders in the firefighting groups that have to make decisions on how they can deal with WSA boundaries.”

Montana has 44 WSAs, which are a lot like protected wilderness, just without that designation made by Congress. But despite that, WSAs are federally managed, either by the U.S. Forest Service or the BLM.

The areas include unique rules for the purpose of discouraging development, and maintaining the natural state of the land; rules like forbidding motorized vehicles, for example.

Al Nash is communications director for the BLM-Montana, Dakotas. He doesn’t agree with Representative Harris’ claim, that WSAs contributed to the Lodgepole fire devastation, because fire managers were forced to grapple with unique, federal rules.

“It wasn’t that it was a wilderness area. It was that there was no good access for wildland engines or heavy equipment,” Nash says. “And that much of the area is extremely steep with very poor footing, so it was not safe to put firefighters on foot in that area.”

Nash says that incident response teams respect the unique rules that help preserve WSAs, but in a wildfire emergency, the BLM will do whatever it takes to help protect the highest priorities in such a situation: people and their property.

See the report here and listen on Montana Public Radio