WWF plan to save species requires destruction of western capitalism 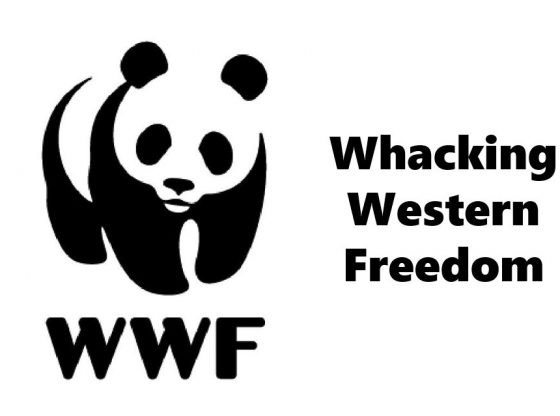 This year’s diatribe claims almost 60 percent of all the fish, birds, and animals on the Earth have been killed by people in two generations. It proposes “a new global deal for nature,” a companion for the Paris Climate treaty.

The Sky is Falling!

A new report from the World Wildlife Fund (WWF) claims humans have killed more than half the all the wildlife in the world since 1970. The report attracted media mass attention, though if you read the entire 145-page essay, it doesn’t really say that, much less prove it. More ironic, the political focus is mostly on countries where the declining wildlife populations do not live, and the solution suggested is so vague it couldn’t possibly address the issue.

The hype about the document, an annual harangue called the “Living Planet Report,” is not surprising, considering the source. This is the same organization that told us a decade ago we would all have to leave. “Earth’s population will be forced to colonize two planets within 50 years if natural resources continue to be exploited at the current rate, according to a… study by the WWF. [The study] warns that the human race is plundering the planet at a pace that outstrips its capacity to support life. The report… reveals that more than a third of the natural world has been destroyed by humans over the past three decades.”

That was a remarkable conclusion, especially considering that 71 percent of the Earth’s surface is water. So humans would have to have destroyed virtually every square inch of land on Earth for the report to be credible.

This year’s diatribe claims almost 60 percent of all the fish, birds, and animals on the Earth have been killed by people in two generations. It proposes “a new global deal for nature,” a companion for the Paris Climate treaty. Except unlike Paris, the proposed “new deal for nature” has no numbers, no specific goals. In fact, there is no definition of what the agreement might entail. Rather, it includes vague suggestions that we’re not locking up enough land from public access, nor creating enough national parks, wildlife refuges, wilderness areas, and other unpeopled places.

The report’s language is decidedly European and American, using policy terms common to the western environmental industry. For example, it discusses the “progress” in removing dams in the U.S., especially criticizing agriculture in the Rio Grande Valley, and cites efforts to designate more wild and scenic rivers. It continues the ongoing criticism of western mining, timber production, and “unsustainable agriculture,” with which we’re all familiar. These people simply want to stop most human uses of land, water, and other resources of the American West.

There is just one major problem with using this report to further that goal. The wildlife it laments does not live in the American West. Keep in mind that the reported declines in wildlife populations are based on computer modeling, not actual counting of actual animals. Still, even if you give such a report the benefit of the doubt, as many will, the dangers cited are from “warming oceans choked with plastic,” toppled rain forests, and dying coral reefs. Thus, populations are said to be tanking worst in the tropics, including an 89 percent decrease in South and Central America. But make no mistake – the U.S. is nonetheless at fault. The report claims “crop failures brought on by climate change” are the reason caravans of Central Americans stream to the U.S. illegally. That’s why we must “urgently transition to a net carbon-neutral society and halt and reverse nature loss — through green finance and shifting to clean energy and environmentally friendly food production.”

In a way, the details in this report may actually disprove its own conclusions. The U.S. and Canada are among countries using the most natural resources, yet the worst wildlife declines are in the Tropics, not in North America. The prime examples cited are African elephants, whale sharks, orangutans in Borneo, wandering albatross near Antarctica, jaguars in South America, gharial crocodiles in India and Nepal, and Chinese giant salamanders.

WWF is not the only Chicken Little constantly warning of a dire future. A similar article, published in the National Academy of Sciences journal last spring, was even more shocking. It claimed that since the dawn of civilization, humans have caused the loss of 83% of all mammals and half of all plants on Earth. That’s because, WWF says, “the vast and growing consumption of food and resources by the global population is destroying the web of life.” So while you stop driving cars and heating your homes, you might also need to stop eating – while you pack for the trip to some other planet.

If we are not Chicken Little, is the sky still falling?