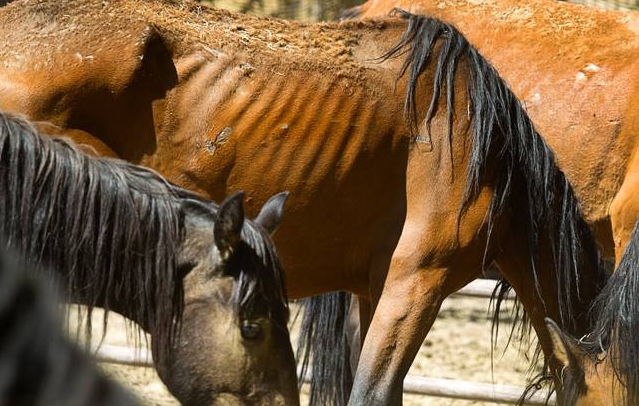 While the inspector general’s review pointed to probable scenarios outlined by the BLM’s national director to reach targeted levels in three to five or 10 years, it said the agency has no formal plan in place to deal with the problem.

Report: BLM has no strategic plan for wild horses

SALT LAKE CITY — The nation’s wild horse and burro population is growing by 18 percent to 20 percent each year under a budget that has ballooned 433 percent over the past 17 years.

Still, the U.S. Department of the Interior’s Office of Inspector General found that the Bureau of Land Management has no strategic plan dealing with the wild horse and burro populations.

“The constant and continued growth of on-range populations will result in an increased need for off-range holding facilities and resources to obtain these facilities,” according to the report released Thursday. “A long-term strategic plan is necessary to sustain land health, animal populations and affordability.”

The review specifically looked at whether the federal agency’s cooperative agreements and contracts for wild horse and burro off-range holding facilities are cost-effective and comply with the law.

Since 1998, the BLM’s costs associated with off-range pens and pastures have grown to consume 65 percent of the program’s $80 million budget.

“We found that BLM does not maximize the cost-effectiveness of its off-range holding facilities,” the review said, adding that contracts fail to provide the “best value” for services.

A BLM official told reviewers that the process for moving a horse to the cheaper alternative should take about 120 days, but some horses have been held in short-term facilities for as long as five years, according to the report.

The review found that the agency could save $3.7 million by moving nearly 3,000 animals into the cheaper pastures — money that could be put to better use over the next year.

There are an estimated 67,000 wild horses and burros spread over 10 Western states, including Utah. The BLM says its targeted management number is exceeded by 40,000 animals.

In Utah, the overpopulation problem has spawned lawsuits and multiple trips to Washington, D.C., by elected officials to plead for action from the BLM. The Utah Legislature approved a resolution calling for state oversight of wild horses, a proposal introduced in Congress by Rep. Chris Stewart, R-Utah.

While the inspector general’s review pointed to probable scenarios outlined by the BLM’s national director to reach targeted levels in three to five or 10 years, it said the agency has no formal plan in place to deal with the problem.

This summer, the Utah BLM announced plans to remove 150 horses from state trust lands, as well as private property in Beaver County, as a result of an agreement that grew out of a lawsuit.

The removal, however, only goes so far to address a problem that the cash-strapped agency says has become untenable.

Greg Sheehan, director of the Utah Division of Wildlife Resources, said the state’s burgeoning population of wild horses is hard on the rangeland, livestock and wildlife populations.

On land west of the city of Beaver, where the agency has a 10,000-acre wildlife management area, wild horses are driving elk and deer away from water sources and destroy forage, Sheehan said.

Sheehan said the BLM’s nearby herd management area has set a target for 525 horses, but his agency counted 1,726 — without really trying.

“They’re going to have to do something,” he said. “I know the BLM is trying to do what they can, but it’s a difficult issue.”

Kim Christy, deputy director of the Utah School and Institutional Trust Lands Administration, praised the BLM’s efforts to address the problem with the cooperative agreement and deal with specific trespass problems posed by the wild horses.

“However, the inspector general report is further evidence that broad reform in the off-range care and maintenance of wild horses and burros is necessary,” he said. “We look forward to working further with the BLM, as well as public range and horse advocates, to find sensible solutions to protect these animals, manage them in a respectful manner, and begin the repair of public and state trust lands.”