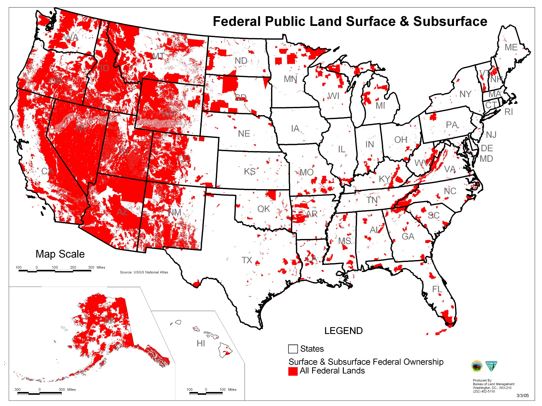 “BLM will be more efficient and responsive in its new home of Grand Junction, where its employees will live alongside the ranchers, miners, and farmers who are most impacted by its decisions. I applaud Secretary Bernhardt and Casey Hammond for continuing to drain the swamp and giving a voice to forgotten communities of the West.”

Excerpts from a press release issued by the Congressional Western Caucus

Congressional Western Caucus Chairman Paul Gosar (AZ-04): “BLM currently manages nearly 248 million acres, 99% of which is west of the Mississippi River. BLM will be more efficient and responsive in its new home of Grand Junction, where its employees will live alongside the ranchers, miners, and farmers who are most impacted by its decisions. I applaud Secretary Bernhardt and Casey Hammond for continuing to drain the swamp and giving a voice to forgotten communities of the West.”

Senate Western Caucus Chairman Steve Daines (MT): “This is welcome news to the West and all Americans who love our great public lands. Moving public land decision makers out of the marble halls and buildings of DC and closer to the people and vast public lands they manage is common sense. I applaud Secretary Bernhardt and President Trump for finally getting this done.”

Chairman Emeritus Rob Bishop (UT-01): “Secretary Bernhardt is promoting a thoughtful, methodical approach that is a true win for the West. I’m pleased that a significant number of personnel will be coming to Utah and other Western states. The BLM personnel will be moved where they will have a greater impact on, and input by, the people who live in the regions where their influence is greatest. Not by bureaucrats from thousands of miles away. I will continue to work with the Secretary to determine that the positions moving to Utah are placed in the most effective areas in the state. Secretary Bernhardt’s efforts have brought logic to where these positions will be most effective and I sincerely hope that politics and dogma in Washington don’t stifle this effort to make government more responsive.”

Chief Regulatory Reform Officer Andy Biggs (AZ-05): “This is another victory that President Trump and his administration have delivered for the west.  Most people don’t realize that the federal government owns most of the land west of the Mississippi, so it is common sense for the BLM’s headquarters to be closer to the land that it manages – and as far away from the swamp as possible.”

Vice Chairman for Indian Affairs and Oceans Don Young (AK-At Large): “I have always believed that the best stewards of our precious lands are those who live closest to them. Simply put, decisions impacting the West should be made by people living, working, and raising their families in the West. Alaskans are all too familiar with the problems that arise from bureaucrats making decisions on their behalf from office buildings 4000 miles away, which is why the relocation of BLM headquarters is welcome news for those living in the West. I am pleased that Secretary Bernhardt has taken this step, and hope more DOI departments follow BLM out of Washington.”

Chief Rules Officer Dan Newhouse (WA-04): “The Bureau of Land Management plays an extremely important role in our way of life in the West. Moving the BLM headquarters closer to the people and the public lands they manage while saving taxpayer dollars is a win-win for the American people.”

Chief Agriculture and Business Officer (CA-01): “I support the decision to relocate the Bureau of Land Management headquarters to Colorado. The reality is that the vast majority of BLM’s issues are out West, not in Washington, D.C., so why shouldn’t their location reflect that? This move will bring BLM closer to the people whose lives their policies will impact the most, and that’s a good thing.”

Congressman Scott Tipton (CO-03): “Today is a great day for Grand Junction, the Western Slope, and for every believer that the federal government should be closer to the people whom its decisions affect. Colorado’s Third Congressional district serves as a microcosm of almost every land-management issue in the American West. As a native of Colorado’s Third Congressional District, Sec. Bernhardt knows the lands well and I applaud his leadership on making this move a reality. I look forward to seeing the final plan and congratulate the community of Grand Junction for this great opportunity.”

Senator Cory Gardner (CO): “Today is a historic day for our nation’s public lands, western states, and the people of Colorado. Relocating the Bureau of Land Management to the Western Slope of Colorado will bring the bureau’s decision makers closer to the people they serve and the public lands they manage. The problem with Washington is too many policy makers are far removed from the people they are there to serve. Ninety-nine percent of the land the BLM manages is West of the Mississippi River, and so should be the BLM headquarters. This is a victory for local communities, advocates for public lands, and proponents for a more responsible and accountable federal government.”

Senator Kevin Cramer (ND): “Glad to see another agency moving decision makers away from the swamp and closer to the people they serve.”

Congressman Doug Lamborn (CO-05): “I applaud Secretary Bernhardt for relocating the Bureau of Land Management (BLM) to Grand Junction, Colorado. This reorganization will make the department more efficient and bring policy makers closer to the people most affected by their decisions. In addition, this move will allow BLM officials to travel to locations more easily, with shorter flights, and an improved quality of life. In a recent Natural Resources Committee hearing I encouraged Secretary Bernhardt to relocate BLM westward to Colorado. This has truly been a bicameral effort, and I want to thank Senator Cory Gardner for his tireless work in making this move a reality.”

Congressman Ken Buck (CO-04): “I’m excited to hear that the BLM headquarters is coming to Colorado! This is a tremendous victory for our state’s economy, the people of Colorado, and those who manage our nation’s public lands.”

Congressman Louis Gohmert (TX-01): “The announcement of the relocation of the Buearu of Land Management’s (BLM) headquarters to Grand Junction, Colorado is a welcome decision. It does not seem right that policy makers within the Department of the Interior are located thousands of miles away from the land and people that their decisions ultimately affect. Moving the decision makers at the BLM closer to the land they control will add an increased level of accountability not available with the current model of concentrating bureaucracy in Washington, D.C.”

Congressman Dusty Johnson (SD-At Large): “It’s encouraging to see government moving out of Washington. Since the majority of federal lands are concentrated in the West, it makes logical and financial sense to have the BLM headquarters located in the western part of the country. An ‘on the ground’ presence in the West will allow BLM to better serve the American people and our public lands.”

Congressman Russ Fulcher (ID-01): “This relocation to the west is consistent with the philosophy that the best government is closest to the people. I applaud Secretary Bernhardt’s decision and look forward to his continued support of the west.”

Congressman Paul Cook (CA-08): “I’m pleased to hear that the Bureau of Land Management will move west to Colorado. The vast majority of the land the BLM manages is out west, so it only makes sense for their headquarters to be there, rather than in Washington, DC. This move will help the BLM to better understand local issues and will also bring new jobs and economic benefits to the area. I applaud Interior Secretary David Bernhardt for making this decision.”

Today, Department of the Interior (DOI) Assistant Secretary for Land and Minerals Management Joe Balash sent four identical letters to the Senate and House Appropriations Chairmen and Ranking Members providing additional information on BLM’s realignment of resources to the West and establishment of a new BLM headquarters in Grand Junction, Colorado.

The proposal seeks to strengthen the BLM’s organization at the state level.

Under this proposal, 550 positions were evaluated in Washington D.C. and in the field. Every Western state will gain additional staff resources with 222 positions currently performing headquarters duties in Washington D.C. moving to BLM’s western regions to continue to perform these duties. The BLM Director and 26 others will be based in Grand Junction, Colorado at a new Headquarters.

A headquarters in the West will move BLM closer to the resources it manages and provide increased customer service and accountability to the American people. BLM currently manages nearly 248 million acres, 99% of which is west of the Mississippi River.

The current BLM headquarters is located in Southeast Washington, D.C. with a lease expiring at the end of the year. A renewed lease is not an option as it would exceed $50 per square foot due to its location near the Nationals Stadium in Washington, D.C.

The move would save significant taxpayer money on lease locations, employee travel and employee salaries.

In May of 2017, the Bureau of Land Management Relocation Act was introduced by numerous Western Caucus Members, including in the Senate by Senator Cory Gardner (CO) and in the House by Rep. Scott Tipton (CO-03). The bill received broad, bipartisan support in the House and the support of four additional Senators.

Senior staff moving to Colorado will have to do so by Oct. 1, the start of the 2020 fiscal year.