Water for food production must be highest priority

Home /latest_news, Local/Water for food production must be highest priority 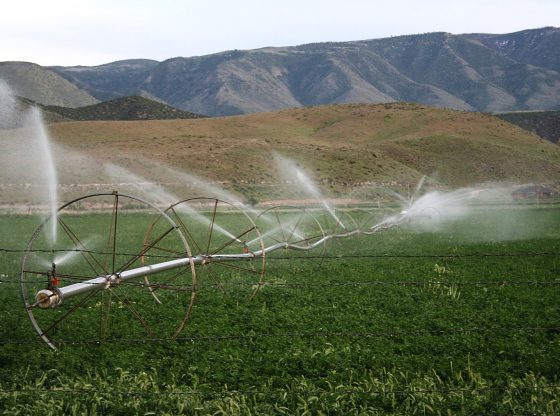 Another concern that came out of the OSU study was that the region’s growing population will ultimately max out the water supplies of several cities. That means as more water goes to flushing toilets and other household uses, agriculture faces the possibly of being squeezed out.

Agriculture the most important use of water

When it comes to farming in the West, all you have to do is add water.

With water, the West has blossomed. Take a look at the vast Columbia Basin in Washington and the Snake River valley in southern Idaho. And the Central Valley in California. And all of Eastern Oregon.

Anywhere water is available, the predominant color is green, with high-value and high-yield crops dotting the countryside. Without water, the countryside is brown or growing dryland crops with much lower yields.

In Western Oregon, especially the Willamette Valley, water has been less of an issue. Owing to a healthy annual rainfall, many farmers have done well without the benefit of irrigation. With irrigation, others grow an impressive variety of high-value crops, from the nearly $1 billion-a-year nursery industry — the largest ag sector in the state — to livestock and specialty crops. The valley nurtures a robust agricultural industry, complete with food processors and exporters. Six of the state’s top 10 agricultural counties are in the Willamette Valley, including Marion County, the top producer with more than $600 million in agricultural production.

Agriculture should not be seen as just another use of water. It produces the food we all eat.

For that reason, if no other, we would expect Oregon leaders to make the well-being of Willamette Valley agriculture a top priority.

That’s why a couple of recent studies should be concerning to them and anyone involved in Oregon agriculture.

A recently announced study by the U.S. Army Corps of Engineers has set off a debate among the region’s water users, including farmers and ranchers. In it, the Corps, with help from the Oregon Water Resources Department, has decided that only 16 percent of the nearly 1.6 million acre-feet stored by 13 federal dams in the Willamette Valley would be used for irrigation. By contrast, 60 percent would be set aside for fish and wildlife.

The Corps is seeking comments on that. Here’s ours: More water is needed for agriculture. A lot more.

Any limit on irrigation represents a limit on agriculture. Cropping patterns are constantly changing. As water becomes available, that means farmers can grow higher-value crops and get higher yields.

To cut off irrigation at such a paltry amount tells farmers and ranchers that they aren’t a priority despite their success as stewards of the land and economic drivers for the state. It’s as though the amount of water designated for agriculture was an afterthought.

Another study, by Oregon State University, adds alarm to our reaction to the Corps and OWRD study. It predicts that by the turn of the next century, Willamette Valley farmers will be irrigating more because of the changing climate. It also found that the lack of infrastructure — pipelines and canals — to distribute water around the valley will limit irrigation. More infrastructure can be built, but more water can’t be made.

Another concern that came out of the OSU study was that the region’s growing population will ultimately max out the water supplies of several cities. That means as more water goes to flushing toilets and other household uses, agriculture faces the possibly of being squeezed out.

Agriculture should not be seen as just another use of water. It should be seen as the most important use. Farmers and ranchers produce the food we all eat. Doing that requires water.