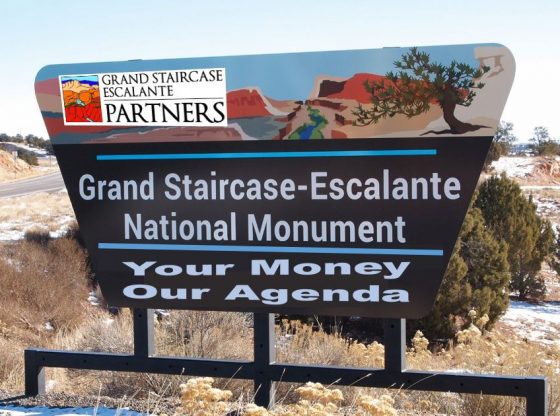 It’s no secret that the goal of the environmentalist movement is to lock up vast expanses of public lands, and the resources contained therein, away from potential economic development and human access, with exceptions for tourism and a few ‘approved’ scientists. It’s also no secret that federal land management agencies such as the Bureau of Land Management (BLM), National Parks Service (NPS), Fish and Wildlife (FWS) and U.S. Forest Service (USFS), are filled with bureaucrats and agents who are products of environmentalist indoctrination, and who  entered into federal employment with an agenda. Finally, no one should be surprised by the number of federal land management employees who leave the public sector to become lobbyists for green groups, and vise versa.

Although environmentalist dogma has dominated the highest levels of BLM, NPS, FWS, and USFS for decades, the agenda-driven policies of those agencies has become increasingly hostile to local interests in those regions where federal managers wield power over lands and resources. Incestuous ties between these billion dollar, taxpayer-funded agencies and private environmentalist special interests have been tacitly encouraged by establishment bureaucrats (the swamp), and largely ignored by Congress. The uncomfortable truth is, however, that federal employees and environmentalist NGO’s have been colluding for years to develop policies that often harm local interests, and the same players are implementing those policies using resources purchased with the taxes paid by the very people being harmed by their efforts.

About 8 years after President Clinton’s sneak attack on Utah in 1996, when he unilaterally created the 1.9 million-acre Grand Staircase-Escalante National Monument (GSENM) without local input or approval from elected leaders or citizens, the environmentalist group, (Friends of) Grand Staircase-Escalante National Monument Partners (GSEP), materialized. GSEP claims a 501C-3 non-profit status, and entered into a Memorandum of Understanding (MOU) with the BLM in 2004.  According to the MOU, GSEP would achieve the following:

♦enhancing the public knowledge and appreciation of the Monument’s role in the research and management of public lands, including recreation and natural, cultural, and historic resources, particularly on GSENM;

♦producing educational, interpretive, and research supporting products for public sale and/or use

The MOU states that the BLM was compliant with both federal and state law in structuring its working relationship with GSEP (Friends), and it outlines the tasks with which both parties were charged, which include:

♦Access to Monument resources and staff to ‘develop and implement Friends’ board training/orientation and volunteer training, scheduling, and supervision of programs…’

♦BLM would provide a free space within a national monument visitor center for the Friends to maintain and operate office functions, including use of BLM computers, and BLM assistance with design and printing of brochures, posters and letterhead; postal services and postage; video and teleconferencing equipment and facilities; assistance with web site development and maintenance.

♦Develop an annual ‘needs list’ with Friends from which Friends will operate.

Although the BLM retained the right to end its relationship with the group at any time, the MOU remains in force today. Responsibilities of the Friends are listed in the MOU, many of which give the group considerable sway over GSENM volunteers and donations and cash transactions. They include:

♦Participate in recruitment, supervision, training, and scheduling of volunteers to assist with visitor and science programs, projects, and visitor center Provide record-keeping to track type of volunteer work and hours.

♦Annually provide the Monument with a financial report, next year budget, and business

♦Pursue and distribute funds from individuals, corporations, and foundations. Friends expects to generate annual revenues including but not limited to individual, corporate and foundation contributions, interpretive and educational information distribution and sales, special events, and sales of specialty Utah license plates.

♦May identify and set aside funds for capital improvements of the visitor centers or exhibits, educational curriculum, or research, with the concurrence of the Monument

Other powers given to the GSEP by the BLM are production and distribution and sales of materials to “support Monument’s scientific, educational, historic, cultural, and interpretive activities.” Federal BLM funds would pay for their website, www.gsenm.org, and “more widely inform U.S. and international populations about the Monument, its physical attributes, mission and activities. www.gsenm.org will link appropriate Monument web sites as well as to other government and business sites. www.gsenm.org will provide the avenue for Friends’ general membership development to engender greater bonds between people everywhere with the Monument and to provide the instrument for people to donate their financial support to the Monument’s purposes.” In other words, the BLM has been giving taxpayer dollars to GSEP to pay for their messaging platform, office space, materials, and fundraising activities.

Conversely, in what appears to be a subservient role by federal BLM employees to that of GSENMP, “The role of Monument employees is to represent the interests of the BLM and to provide cooperative assistance to the Friends.”

The BLM did not fully respond to my FOIA request with full financial disclosure records, but its Kanab, Utah office did provide me with the current agreements under which the federal government and GSEP are currently operating. The BLM awarded the group one grant in the amount of $175,940.00 effective August 22, 2015 through June of 2019, and an additional grant for $227,836.00, effective July 26, 2016, also through June of 2019, for a total of $380,080.00 for period of roughly 4 years.

The veracity of the MOU and the grant documents are not in question. But it does seem that a lot of taxpayer cash is going to a group of activists which have no employee accountability to the federal government which is supplying them with our money to carry out their activities. It’s not the legality of the relationship, but rather the activities of GSEP that are the root of the problem, all willingly facilitated by government employees who seem quite happy to yield authority and cash to a private environmentalist non-profit.

Despite its noncontroversial-sounding functions, GSEP is much more representative of the environmentalist Left than it is of the locals who live in and around the Monument. For instance, GSEP’s fact sheet for the Monument reads like a Psalm to the majesty of the federal designation, but is full of inaccuracies and omits information about the legal deficiencies and ulterior motives in Clinton’s use of the Antiquities Act in its 1996 creation. GSEP also ignores economic and social damage caused locally by the Monument, which has only worsened over the last 20 years.

GSEP is involved with Escalante River Watersheds Partnership (ERWP), which, although it claims to want to bridge the philosophical divide between ‘conservation’ groups and locals, partners with numerous radical groups which fight grazing, energy development, and local stewardship of lands and resources in southern Utah. These ‘partners’ include; Great Old Broads for Wilderness, whose founder was recently arrested and charged for endangering cattle in San Juan County, Utah; Grand Canyon Trust, which has a well-earned reputation for using doomsday hysterics about grazing, mining, etc., to squeeze dollars out of gullible donors; Trout Unlimited, a ‘green decoy’ group affiliated with anti-energy extremists, and radical environmental groups; and Wild Utah Project, whose list of partners is a Who’s Who of extreme environmentalist NGO’s including Center for Biological Diversity and Defenders of Wildlife, which have been enriched by millions of taxpayer dollars through ‘sue & settle’ scams perpetrated on the federal government. And, there are other hard-core environmentalist groups with whom GSEP is aligned. With that kind of company, there exists understandable doubt about GSEP’s intentions, and they’re likely to have a tough time convincing local folks that they have their best interests in mind.

Having these kinds of alliances, which naturally reflect philosophical outlooks,  makes it clear that GSEP is not a group that will advocate for issues that are critically important to southern-central Utah’s local economies; such as rolling back creeping restrictions on grazing; opening up resource-rich areas near the National Monument to exploration and extraction; encouraging more local and private input in land management policies; and reducing the scope of federal control of lands and resources so tax revenues can be freed-up to ensure public schools have adequate funding for local kids.

As a matter of fact, GSEP has taken a position opposite that of the majority of working citizens who live in Kane and Garfield counties, where the Grand Staircase-Escalante National Monument has had a profound and mostly negative impact. When state and local leaders leaders recently passed a resolution calling for ‘shrinking’ the GSENM, which was then signed by Utah’s Governor Herbert, GSEP went to work opposing the elected leaders who were acting in behalf of their constituents. The group turned their Facebook page into a talking points memo opposing any changes to the Grand Staircase-Escalante National Monument’s size or restrictive designation. The GSEP website, supported by taxpayer dollars, is a now a billboard promoting near reverence for Clinton’s 1996 designation, which at the time of its creation dealt a devastating blow to Utah’s coal industry, killed a major mining operation, and instantly vaporized 1,000 mining jobs, and by extension, about 3,000 additional local jobs. Residents of the impacted counties and towns, to this day, have nursed a justifiable resentment for the executive action that changed their lives overnight.

Also, in opposition to Utah’s local voices, GSEP sided with environmentalist groups and giant outdoor recreation companies in support of the designation of 1.35 million acres in nearby San Juan County as the controversial Bears Ears National Monument (BENM). Support for BENM has come primarily from organizations and corporations outside of San Juan County, including the Bears Ears Intertribal Coalition, whose member tribes are mostly from Arizona, New Mexico and Colorado. Surveys taken in San Juan County have shown that the vast majority of the local population, including Navajo and Ute tribal chapters, strongly oppose Obama’s executive action which created BENM, and a healthy majority of about two-thirds of people in Utah generally, oppose the 1.35 million-acre federal land grab.

There’s no question that some of the taxpayer dollars granted to GSEP for ‘educational’ purposes at the Monument, are being used to fight against what the locals in southern-central Utah want, which is a significant reduction in the size of the federal entity with which GSEP is financially entangled.

The relationship between the federal BLM and GSEP is over a decade old, has gone largely unnoticed, and is probably just one example of an environmentalist non-profit using taxpayer dollars to carry out an ‘educational’ agenda antagonistic to local interests. This instance brings to mind the old adage, “there ought to be a law.” Perhaps if more Americans were aware of this untoward application of their hard-earned taxpayer dollars, Congress might look a little more deeply into this, and similar shadowy entanglements.