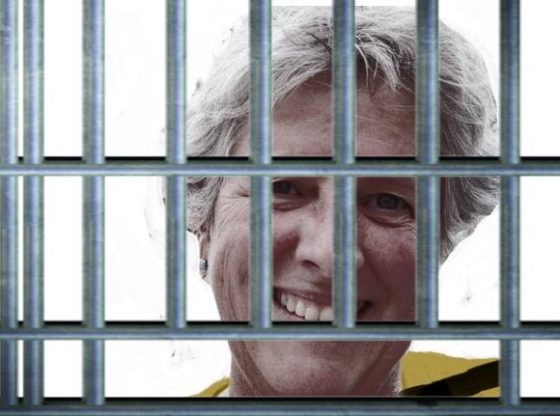 A hearing was held in San Juan County Court on November 2, and the dates were set for Chilcoat’s and Franklin’s criminal trials. Chilcoat will be tried on felony attempted livestock destruction, retaliation against a witness, and misdemeanor trespass on State Trust Lands.

An elderly anti-grazing activist with a reputation in southeastern Utah for childish pranks and environmental radicalism will soon face her day in court on charges related to a cattle endangerment incident earlier this year. In June, activist Rose Chilcoat and her husband, Mark Franklin, were charged on several counts for an apparent effort to prevent cattle from having access to water. She was charged with 2 felonies and 1 misdemeanor for her actions, while her husband was charged with trespassing on State Trust Lands. Her trial is set for January 31 of 2018, and that of her husband and accomplice, will begin the following day.

Last April, two ranchers, Zane Odell and Zeb Dalton, whose grazing allotments are near Lime Ridge, which is an extremely arid area between the towns of Bluff and Mexican Hat, found evidence that someone had closed a gate on their property, preventing cattle from having access to a watering site. The ranchers’ allotments are on Utah’s School Trust (SITLA) Lands, and the men maintained the watering site and built a fence around it to better protect the source.

Odell had previously placed a trail cam at the watering site to record anyone who might enter the area, and so was able to capture images of the trespassers and their vehicle. A couple days after seeing the images on the trail cam, Odell and Dalton returned to repair the site’s pump and some pipes. While there, the ranchers saw the vehicle they had earlier recorded on the trail cam enter the area, and they ran to stop it. The San Juan County-based blog, The Petroglyph, reported the incident this way:

According to Mr. Odell, At first the male and female in the vehicle were upset for being stopped. The female began throwing a fit and taking pictures of the ranchers and their vehicle. Zeb Dalton stated that he told the female to go a head and take her pictures because he had pictures of her husband and her doing what they had done. At which time the female suspect quickly returned to her vehicle and stopped throwing a fit according to Mr. Dalton.

At some point the Sheriff was notified and was dispatched to the location. While waiting for the Sheriff, Mr. Odell stated that the male in the vehicle admitted to closing the gate despite the fact he had no reason to do so. Later, the two were identified as Rose Chilcoat, the retired ex-director of the Great Old Broads for Wilderness and a board member of Friends of Cedar Mesa, and her husband.

Although Chilcoat and her husband were detained and questioned, they were not arrested at the time they were caught by the ranchers. In April they were handed the trespass charges, and later in June, Chilcoat received the additional felony charges.

A hearing was held in San Juan County Court on November 2, and the dates were set for Chilcoat’s and Franklin’s criminal trials. Chilcoat will be tried on felony attempted livestock destruction, retaliation against a witness, and misdemeanor trespass on State Trust Lands. The charge of retaliation resulted from Chilcoat filing a false complaint about Zane Odell to the Bureau of Land Management (BLM) two days after he and Zeb Dalton detained her and her husband. Another felony charge against Chilcoat for providing false information to a law enforcement officer was dropped. That charge stemmed from Chilcoat claiming that her last name is ‘Franklin,’ the same as her husband’s–which they do not share–when the officer on site sought her personal identifying information.