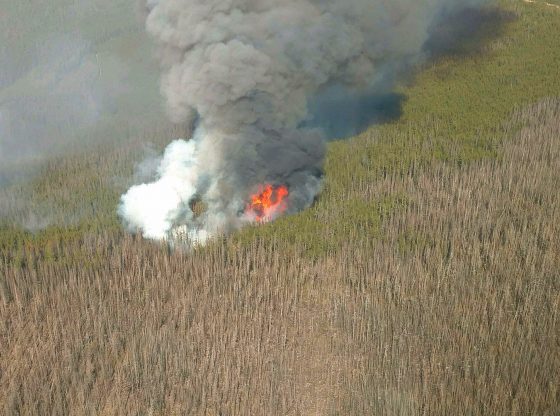 Across the country, particularly in the west, national forests have millions of dead and dying trees. Growth and mortality rates far outpace fuels reduction and timber harvesting. Forests have become unnaturally dense and overgrown, and insect epidemics have laid waste to entire landscapes. Unsustainable fuel loads are resulting in larger wildfires, which helps explain why more than half of the Forest Service’s budget is now dedicated to wildfire suppression.

As Congress returns from its August recess, it’s time for the federal government to turn its attention to reforming forest management policies. Catastrophic wildfires are affecting millions of Americans living near our dying national forests, where wildfires are resulting in tragic losses, threatening communities and polluting our air with toxic smoke. The disastrous 2017 wildfire season has already burned 7 million acres, and may yet surpass the record-breaking 2015 season that burned over 10.1 million acres.

Some believe the solution to our wildfire crisis is to end practice of “fire borrowing,” a situation where the U.S. Forest Service is forced to raid non-fire accounts when its suppression budget is exhausted. It is true this practice should be stopped because it has an enormously disruptive effect on the agency and its ability to manage public lands.

But in recent years Congress has increased funding for wildfire suppression and hazardous fuels reduction programs. Money alone will not enable federal agencies to treat the 60 to 80 million acres of public lands that are at immediate risk of catastrophic wildfire, insects and disease. We need changes in policy.

Across the country, particularly in the west, national forests have millions of dead and dying trees. Growth and mortality rates far outpace fuels reduction and timber harvesting. Forests have become unnaturally dense and overgrown, and insect epidemics have laid waste to entire landscapes. Unsustainable fuel loads are resulting in larger wildfires, which helps explain why more than half of the Forest Service’s budget is now dedicated to wildfire suppression.

There’s plenty of science that shows fuel reduction helps reduce the size and severity of fires. That’s why Congress must reduce the cost and time needed to develop and implement forest projects that reduce fuel loads and help adapt our landscapes to the impacts of climate change and drought. Congress must also place reasonable limits on activist lawsuits that obstruct efforts to improve forest health, reduce the risks of catastrophic wildfires and enhance and protect wildlife habitat for vulnerable species.

Legislation such as the bipartisan Resilient Federal Forests Act of 2017shows that it’s possible to expedite projects under existing federal environmental laws, while promoting collaboration among diverse stakeholders and resolving disputes without costly litigation. Congress should pass this legislation without delay.

Current forest management policies are arbitrary, outdated and unresponsive to changing conditions on the ground. Oregon’s Chetco Bar Fire, currently the nation’s highest fire-fighting priority, is a perfect example. The fire started July 12 when lightning struck a snag and began burning — the same area scarred by the 1987 Silver Fire and 2002 Biscuit Fire in the Kalmiopsis Wilderness, a congressionally designated wilderness area where forest management activities such as mechanized thinning are strictly prohibited.

The Forest Service could have quickly attacked the small fire but let it burn for over a month. Then the winds picked up and it exploded by 38,000 acres in a matter of days. Today the fire has grown to over 128,000 acres, ravaging Forest Service and Bureau of Land Management forest lands, destroying homes and prompting evacuations in the community of Brookings. The Chetco Bar is a catastrophe not because the Forest Service lacked funding. Rather it’s because federal agencies were unable or unwilling to treat dense, kindle-dry forests — and then seemingly stood by as the fire burned unchecked.

The Chetco Bar Fire is an example of the limits of the “let-it-burn” philosophy that has come to influence federal land management, and how arbitrary land “protections” can easily become counterproductive. It also shows that federal spending alone won’t stop the spread of catastrophic wildfires. New policies are needed to promote science-based, active forest management that is desperately needed on federal lands to protect our forests and communities.