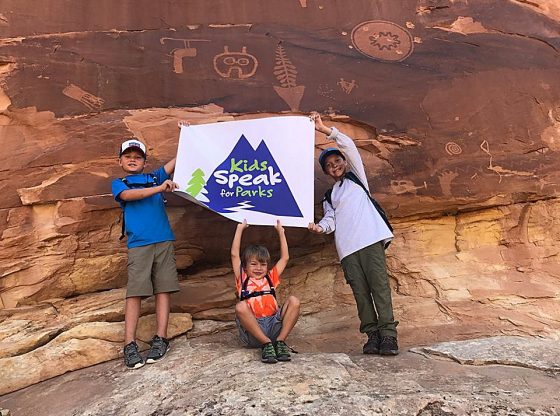 The contrived narrative is that Bond is the driving force behind Kids Speak for Parks. But, this is hardly a grassroots effort dreamed-up by a 9-year old freckle-faced boy; this non-profit is the media creation of Feldman Strategies, a progressive political PR firm headquartered in Washington, D.C.

Mainstream media and fawning envirophilliacs have been parading little Robbie Bond around as an ordinary, but courageous spokeskid, defending the nation’s monuments against the evil Trump Administration’s Antiquities Act review. What they’re not telling you is that Robbie Bond is a child actor, and outdoor recreation giant, Patagonia, is a key funding source behind this kiddie’s crusade. Thanks to the great research done by an anonymous source, Free Range Report is exposing the truth behind what media and the corporate green Left want you to believe is the spontaneous emergence of a pre-adolescent enviro warrior.

According to an article in Huffpo, titled, “9-Year-Old Launches Nonprofit To Fight Trump’s Monument Reviews:”

In a stand against President Donald Trump, Robbie announced Tuesday that he has launched a nonprofit called Kids Speak for Parks, and he plans to take his message to all 27 monuments targeted by a pair of executive orders signed by Trump in April. The goal, he told HuffPost, is to protect, advocate for and educate others about America’s national monuments and parks, which he fears will disappear, shrink or face damaging development.

“I want to make sure that our national monuments are available for my kids and for future generations,” he said.

Young Robbie Bond has spent at least one-third of his life in professional acting endeavors, and has an impressive resume as an on-screen actor.  Here he appears [minute 1:07] in a fidget spinner ad as both an inventor and a fan!

But nowhere within the stories of his new-found role as a public lands protector, is his life as a child actor mentioned. There is no question that Robbie is a bright kid. In 2012, Hawaii News Now covered a story about his family moving from Oahu to the East Coast in order to find a school suited to his ‘gifted’ abilities. Nevertheless, his venture into green advocacy does not appear to be the product of his own imagining.

The contrived narrative is that Bond is the driving force behind Kids Speak for Parks. But, this is hardly a grassroots effort dreamed-up by a 9-year old freckle-faced boy; this non-profit is the media creation of Feldman Strategies, a progressive political PR firm headquartered in Washington, D.C.

Like other dishonest players in the monuments debate, Bond’s script conveys the lie that Trump’s goal–and that of others who want a hard look at federal overreach on public lands–is to ‘privatize,’ ‘sell-off,’ and in his words, ‘get rid of’ national parks and monuments.

On the Kids Speak for Parks Facebook page, Bond is pictured with an activist from Friends of Cedar Mesa, an environmentalists group pushing for retention of the 1.35 million acre Bears Ears Monument, designated by Obama on December 28 of last year, despite overwhelming local opposition in San Juan County, Utah.

And, there is this pitch for the Wilderness society…

According to an article about Bond in Non-profit Quarterly, giant outdoor recreation corporation, Patagonia, is boosting this effort with cash:

Bond plans to tour 27 natural sites this summer, including Bears’ Ears, whose threatened status and celebrity attention NPQ reported earlier this year. He has a sponsorship from Patagonia, the outdoor apparel company that has donated tens of millions of dollars in cash, in-kind, and work hours to environmental nonprofits.

It appears Patagonia has found a precocious pre-teen to parrot its corporate environmentalist talking points. In April, following President Trump’s announcement of his executive order for an Antiquities/Monuments review, Patagonia’s CEO declared war, with a threat to sue the administration. In a Hill article, Patagonia CEO, Rose Marcario is quoted:

“We’re watching the Trump administration’s actions very closely and preparing to take every step necessary, including legal action, to defend our most treasured public landscapes from coast to coast.”

But little Robbie Bond is not the first kid to be exploited by political enviro hustlers. Colorado teen, Xiuhtezcatl Martinez, has been protesting against the state’s natural gas industry for half of his life. A self-styled hip hop artist, Martinez, at the behest of Earth Guardians, even sued the federal government to halt natural gas projects in Colorado, ostensibly to fight ‘climate change.’ But its unlikely that, at the age of 8 or 9, Martinez, was not intensely groomed–in his Boulder milieu–by adults with an agenda incomprehensible to such a young child.

Beyond teen Martinez, and young boy Bond, environmentalist groups have shamelessly exploited children as fronts for their radical agendas for years; including this 11-year old from an activist family, and the 20 other kids who joined Martinez in suing the federal government.

Given the proclivity of the green Left to exploit children in its ‘the ends are righteous, so all means–whether destructive, dishonest or dirty–are justified’ crusades to save the planet from its inhabitants, and public lands from the people who live closest to them, it’s no surprise that Robbie Bond’s green ascendancy is actually a manufactured canard. Behind the cute little boy, whose script contains a tired litany of corporate environmentalist talking points on national parks and monuments, is a progressive PR firm, and a global recreational clothing company, whose paths to public lands ‘preservation’ ultimately lead to money.