Move it West: BLM has no business being in D.C., literally!

Home /latest_news, Mismanage, Public Lands/Move it West: BLM has no business being in D.C., literally! 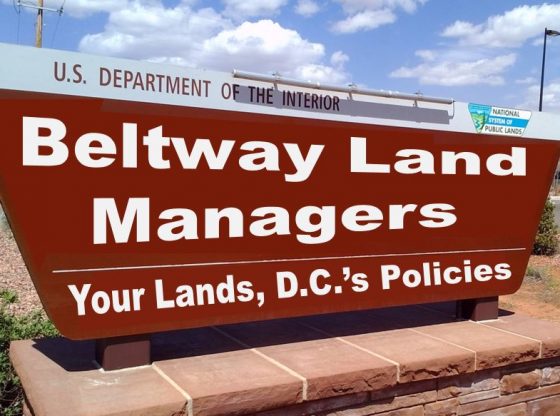 I was delighted to read Sen. Cory Gardner, a Colorado Republican, has introduced a bill to move the headquarters of the U.S. Bureau of Land Management (BLM) from Washington, D.C., to one of 12 western states, including Colorado and Nevada. I think this move is long overdue for a variety of reasons.

“You’re dealing with an agency that basically has no business in Washington, D.C.,” Gardner said as he introduced his bill to move agency headquarters. Somewhat surprisingly, Congressman Mark Amodei, a Carson City Republican who has negotiated a series of federal land transfers to Nevada counties, isn’t co-sponsoring similar legislation in the House of Representatives. According to the Associated Press, Amodei called Gardner’s bill “intriguing,” but stopped short of an endorsement, saying only, “I’m excited they’re looking at it.” Our congressman added federal officials know little about public lands in Nevada … but we already knew that.

As I’ve written many times, I think it’s a scandal the federal government owns 85 percent of Nevada’s total land area, more than 58 million acres. The BLM manages two-thirds of that vast acreage while the U.S. Forest Service and other agencies manage the rest. This makes no sense in a constitutional republic where all powers not granted to the federal government belong to the states.

As the AP reported, “Some Westerners have long argued that federal land managers should be closer to the land they oversee … (and) now they have an ally in Interior Secretary Ryan Zinke, a Montanan who is leading President Trump’s charge to roll back environmental regulations and encourage energy development on public lands.” Obviously, that’s a tendentious description of Trump’s land management policies, which are designed to return parcels of federal lands to the states in accordance with the Tenth Amendment to the Constitution.