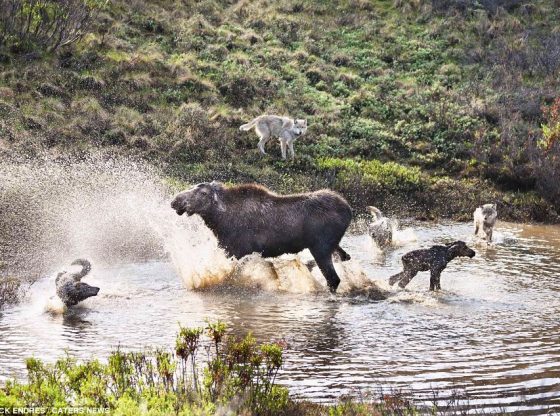 “…ranchers are not interested in compensation for livestock losses. “We are not raising these animals to be savagely killed by wolves, often for sport. So not only do these reimbursement programs not work, they are unwanted…”

Mike Philips, a Montana Democrat legislator, originally from Illinois, and director of the Ted Turner Endangered Species Fund, is pushing hard to bring gray wolves into Colorado. According to an article in the Aspen Times, Phillips “will be the featured speaker Feb. 7 and 8 in Carbondale and Aspen as part of the Naturalist Nights series presented by Wilderness Workshop, Roaring Fork Audubon and Aspen Center for Environmental Studies. Phillips has been studying wolves since 1980 and has worked full-time since 1986 to try to restore their habitat in the U.S.”

Significant opposition to wolf introduction programs has grown in Colorado over the past decade, largely due to the expensive and complicated failures of such programs in other states, where the unintended consequences of roving wolf packs have proved detrimental to wildlife, ranchers, farmers, and state budgets.

Last December, the Colorado Cattlemen’s Association (CCA) sent an email warning its members about the consequences of wolf reintroduction programs. The email emphasizes the rural/urban divide in opinion about attempts to increase and broaden wolf populations, and cites case studies in other states where such programs have wreaked havoc on livestock growers and their animals. The email says, in part:

A study published in the Wildlife Society Bulletin analyzed three decades of U.S. and European public opinion polls, and found that people with the most positive attitude toward wolves had the least direct experience with them, which explains the divide in opinion between rural and urban Colorado. Indeed, the topic of the reintroduction of wolves has been buzzing across the state, and groups like the Sierra Club have been meeting and advocating for wolf recovery with little regard of how it will affect rural Colorado, specifically the state’s ranchers and farmers. “It is true that some surveys indicate many Coloradans support having wolves in our state,” the Colorado Parks and Wildlife stated in a recently published article. “Unfortunately, the costs of living with predators are not borne by most our citizens. Agricultural producers and sportsmen will bear the brunt of the cost. For this reason and many others based in best available science, the Colorado Parks and Wildlife Commission adopted a resolution affirming opposition of the intentional release of any wolves into Colorado,” the article stated.

As the message points out, Colorado Parks and Wildlife (CPW) is opposed to efforts to bring wolves into the state. The agency’s opposition is based on unintended consequences which have played out in other states. Wyoming is one example provided by CCA :

In fact, in states like Wyoming where reintroduction efforts are being implemented, many ranchers have not been satisfied with the resolution of conflict. For example, those who conjured the notion of reimbursement of market value for an animal lost to wolves do not take into consideration the loss of reproduction or the economic loss experienced from severe stress disorders that cattle, sheep and horses suffer due to exposure to wolves. Furthermore, ranchers are not interested in compensation for livestock losses. “We are not raising these animals to be savagely killed by wolves, often for sport. So not only do these reimbursement programs not work, they are unwanted…”

An article published in the Spokesman Review highlighted these exact concerns during an interview in 2013 with local Wyoming ranchers. One said when she “applied for compensation for a confirmed wolf kill from a Defenders of Wildlife Program, she got a letter back questioning whether the ranch was ‘purposefully enticing the wolves’.” Another rancher in the area said that he started noticing wolves on his property seven years ago. Before the wolves appeared, he would usually lose a handful of calves every year to natural causes or black bears and now he’s losing 25 calves. “Each calf is worth about $800. If wolves take 20, that’s $16,000,” he said. Stories like these will become a scary reality for rural Colorado if the reintroduction is approved, and it will not only affect the well-being of herds, but also pose a threat to the safety of family pets.

Although CCA is an advocate body for many of Colorado’s livestock growers, their warning is one among many. Ranching is already a tough business with very thin margins and the complexities of managing herds in wolf territory are contentious and expensive, and potentially dangerous. A recent report of an Oregon hunter who was forced to kill an aggressive wolf, shows that wolves are not harmless to humans.

Environmentalist and animal rights groups have long relied on the wolf’s ‘endangered’ listing as a tool against  to force their pro-wolf, anti-grazing agenda into the courts via lawsuits, but that, too, has been refuted.

Sheila Daley, CCA member and member of the Holy Cross Cattlemen’s Association, explained,“Wolves are also a threat to the working dogs and other livestock, including horses. I have friends in Oregon who had an adult horse killed by wolves in their pasture. They have had several wolf ‘depredations’, as it is now called; and in one specific incident, a calf was killed right behind one of their buildings. Most of the hindquarter was eaten and it was taking its last breath as my friend showed up…and only then did the wolf run off. That is how bold they have become—they travel right into the ranch buildings.”

In comparison to the potential herd devastation ranchers could be facing, the wolf population is booming and will soon be delisted federally due to their population explosion. According to the Fish and Wildlife Service (FWS), “the Northern Rocky Mountain wolf population as a whole continues to be self-sustaining, with numbers well above federal management objectives. Wolves have continued to expand their range westward into Oregon, Washington, northern California and Nevada,” meaning Colorado isn’t even needed to assist in this species propagation.

Groups that advocate for wolf recovery are mostly driven by the faulty assumption that the presence of the wolf is necessary for a healthy ecosystem function. However, any healthy ecosystem has the capability of adapting to the constant change under which it exists. The wolf’s void was filled decades ago in Colorado, and to attempt reintroduction today would harm the very animals that some advocates proclaim need increased protection.

In January of 2016, Colorado Parks and Wildlife Commission (CPW) adopted a resolution opposing all plans to reintroduce wolves into the state. That does not mean, however, that the state plans to systematically  eradicate wolves which might migrate into the state. CPW supports wolf management plans to address existing and migrating wolf populations. The resolution reads, in part:

Why now? Why is a resolution that opposes introduction/reintroduction of wolves under consideration by the Commission?

The USFWS is evaluating the science regarding the recovery of Mexican wolves within the confines of the United States, including introductions of the subspecies to the north, outside of its historic range and within the borders of the states of Colorado and Utah. CPW believes that a concerted effort to recover Mexican wolves within its’ historic range, in full partnership with Mexico, should occur before consideration is given to establishing this subspecies outside of its historic distribution. Such an effort will require a commitment by federal and state agencies in both the United States and Mexico.

This past fall, the USFWS renewed its effort to update the recovery plan for Mexican wolves; the federal timeline calls for a draft plan for public review by late 2016, and the final recovery plan is scheduled for completion in December 2017. The Mexican wolf was extirpated in the wild by 1977, and recovery has struggled since the first captive-bred animals were released in the Blue Range that straddles the Arizona-New Mexico border. Currently, about 110 wolves exist in those states, and a handful of wolves are known in northern Mexico. Although both the United States and Mexico are cooperatively managing a captive breeding program for Mexican wolves, there has been very limited collaborative effort focused on establishing a true binational recovery program for Mexican wolves across their historic range, most of which lies within Mexico.

Is the state of Colorado opposed to wolves? No; neither the PWC, nor CPW staff have expressed opposition to the Colorado Wolf Management Working Group’s recommendations, which clearly demonstrate acceptance of wolves in Colorado, with conditions. The Findings urge that wolves that migrate into Colorado be allowed to live “with no boundaries” where they find habitat. It also recommends that wolves be managed where possible to avoid conflicts with other land uses, including livestock and big game populations, but that problems should be resolved using both non-lethal and lethal methods when needed. CPW firmly supports these recommendations.

An organization for sportsmen dedicated to the conservation of big game species in Colorado and other states, Big Game Forever (BGF) takes a position similar to that of CPW. Although BGF adamantly opposes plans to introduce wolf populations into Colorado, they do support the implementation of cooperative management plans for the predators. According to the BGF blog:

The North American Conservation Model is alive and well in Colorado, but there are troubling signs that it could quickly unravel. Well funded anti-hunting and environmentalist groups are working to establish pioneering wolves from the north and south, in hopes that it may be seed in establishing hundreds of Canadian Gray and Mexican Wolves throughout Colorado.

Wolves’ impact on Colorado’s big game abundance, not to mention its cattle industry, would have devastating consequences as seen in Montana and Wyoming.

Denny Behrens, the Colorado BGF director, reiterated the point, stating: “The question is how many wolves will the state of Colorado allow in the state before we manage them? And that’s the critical piece, because now we have no way to quantify how many wolves it will take to put forth legislation to hunt and manage them.  Creating a Colorado management plan now is so critical. It’s going to be one heck of a fight and we need front range and back range of the Rockies sportsmen and cattlemen to join forces to protect what we have.”

The Montana Democrat, Philips’ choice of venue is understandable. Although western Colorado is largely agricultural and largely conservative, Carbondale and Aspen are two progressive enclaves peopled by urban transplants who are much more likely to be receptive to his message than local farmers, ranchers and sportsmen. Despite what will likely be a fawning reception in Carbondale and Aspen, Philips’ will have a fight on his hands.