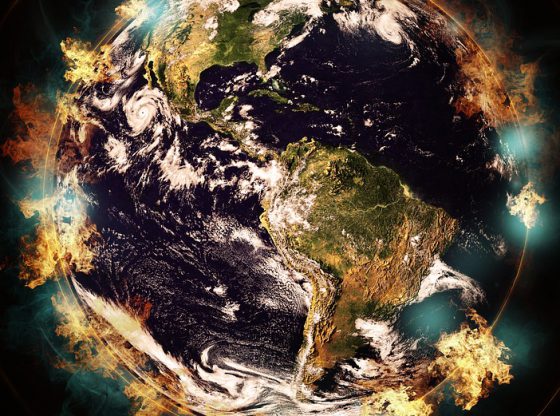 Models that cannot be confirmed by actual observations are of little value and certainly should not be a basis for vital energy policy making. The alarmist mantra seems to be: If models and reality don’t agree, reality must be wrong.

As published by Townhall.com

Call it climate one-upmanship. It seems everyone has to outdo previous climate chaos rhetoric.

The “climate crisis” is the “existential threat of our time,” Speaker Nancy Pelosi told her House colleagues. We must “end the inaction and denial of science that threaten the planet and the future.”

Former California Governor Jerry Brown solemnly intoned that America has “an enemy, though different, but perhaps very much devastating in a similar way” as the Nazis in World War II.

Not to be outdone, two PhDs writing in Psychology Today declared that “the human race faces extinction” if we don’t stop burning fossil fuels. And yet “even people who experience extreme weather events often still refuse to report the experiences as a manifestation of climate change.” Psychologists, they lament, “have never had to face denial on this scale before.”

Then there’s Oxford University doctoral candidate Samuel Miller-McDonald. He’s convinced the only thing that could save people and planet from cataclysmic climate change is cataclysmic nuclear war that “shuts down the global economy but stops short of human extinction.”

All this headline-grabbing gloom and doom, however, is backed up by little more than computer models, obstinate assertions that the science is settled, and a steady litany of claims that temperatures, tornadoes, hurricanes, droughts et cetera are unprecedented, worse than ever before, and due to fossil fuels.

And on the basis of these hysterics, we are supposed to give up the carbon-based fuels that provide over 80% of US and global energy, gladly reduce our living standards – and put our jobs and economy at the mercy of expensive, unreliable, weather dependent, pseudo-renewable wind, solar and biofuel energy.

As in any civil or criminal trial, the burden of proof is on the accusers and prosecutors who want to sentence fossil fuels to oblivion. They need to provide more than blood-curdling charges, opening statements and summations. They need to provide convincing real-world evidence to prove their case.

They have refused to do so. They ignore the way rising atmospheric carbon-dioxide is spurring plant growth and greening the planet. They blame every extreme weather event on fossil fuel emissions, but cannot explain the Medieval Warm Period, Little Ice Age or extreme weather events decades or centuries ago – or why we have had fewer extreme weather events in recent decades. They simply resort to trial in media and other forums where they can exclude exculpatory evidence, bar any case for the fossil fuel defense, and prevent any cross-examination of their witnesses, assertions and make-believe evidence.

Climate models are not evidence. At best, they offer scenarios of what might happen if the assumptions on which they are based turn out to be correct. However, the average prediction by 102 models is now a full degree F (0.55 C) above what satellites are actually measuring. Models that cannot be confirmed by actual observations are of little value and certainly should not be a basis for vital energy policy making.

The alarmist mantra seems to be: If models and reality don’t agree, reality must be wrong.

In fact, even as atmospheric carbon dioxide levels climbed to 405 parts per million (0.0405% of Earth’s atmosphere), except for short-term temperature spikes during El Niño ocean warming events, there has been very little planetary warming since 1998; nothing to suggest chaos or runaway temperatures.

Claims that tornadoes have gotten more frequent and intense are obliterated by actual evidence. NOAA records show that from 1954 to 1985 an average of 56 F3 to F5 tornadoes struck the USA each year – but from 1985 to 2017 there were only 34 per year on average. And in 2018, for the first time in modern history, not a single “violent” twister touched down in the United States.

Harvey was the first major (category 3-5) hurricane to make US landfall in a record twelve years. The previous record was nine years, set in the 1860s. (If rising CO2 levels are to blame for Harvey, Irma and other extreme weather events, shouldn’t they also be credited for this hurricane drought?)

Droughts differ little from historic trends and cycles – and the Dust Bowl, Anasazi and Mayan droughts, and other ancient dry spells were long and destructive. Moreover, modern agricultural and drip irrigation technologies enable farmers to deal with droughts far better than they ever could in the past.

Forest fires are fewer than in the recent past – and largely due to failure to remove hundreds of millions of dead and diseased trees that provide ready tinder for massive conflagrations.

Arctic and Antarctic ice are largely within “normal” or “cyclical” levels for the past several centuries – and snow surface temperatures in the East Antarctic Plateau regularly reach  -90 °C (-130 F) or lower. Average Antarctic temperatures would have to rise some 20-85 degrees F year-round for all its land ice to melt and cause oceans to rise at faster than their current 7-12 inches per century pace.

In fact, the world’s oceans have risen over 400 feet since the last Pleistocene glaciers melted. (That’s how much water those mile-high Ice Age glaciers took out of the oceans!) Sea level rise paused during the Little Ice Age but kicked in again the past century or so. Meanwhile, retreating glaciers reveal long-lost forests, coins, corpses and other artifacts – proving those glaciers have come and gone many times.

Pacific islands will not be covered by rising seas anytime soon, at 7-12 inches per century, and because corals and atolls grow as seas rise. Land subsidence also plays a big role in perceived sea level rise – and US naval bases are safe from sea level rise, though maybe not from local land subsidence.