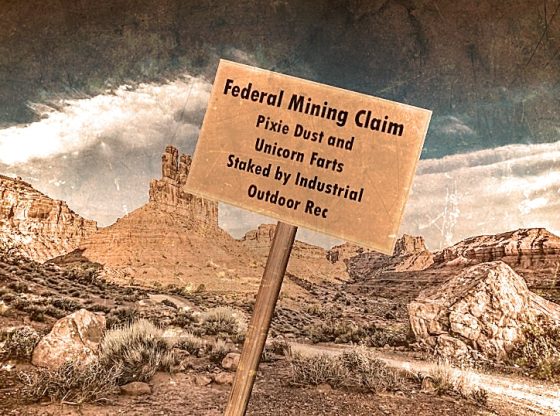 Since February 4, when mineral claims on the land could be filed, three new claims have been filed. Two of them are not by mining interests, but appear to be publicity stunts or media actions. Morgan Sjogren, an outdoor writer, filed a claim on public land in the Deer Flat area, north of Natural Bridges National Monument.

Nearly two months has passed since headlines around the country declared that a land grab was about to take place in San Juan County.

The stories suggested that an influx of speculators, miners, and “Big Oil” were poised to stake mineral claims on public lands that had “lost their protection” when the boundaries of the Bears Ears and Grand Staircase national monuments were changed.

To date, the predictions have proven to be false in San Juan County, despite the fact that the story neatly fits into the key narrative that is pushed by the advocacy groups who oppose the adjusted monument boundaries.

A recent visit to the office of the San Juan County Recorder David Carpenter showed no evidence of a land rush. Carpenter’s office would be ground zero of any mining rush.

However, there has been little action in the office in the past weeks. Few filings, no speculators, and no loaded burros tied up to the hitching post in front of the county courthouse.

“It has been slow,” said Inez Harlan, who works in the office. “In fact, it is much slower than in the past.”

Harlan explained that the majority of mineral claim work completed by the office is to update and manage existing claims.

“You know who comes in,” she explains. “They come in every year.”

Since February 4, when mineral claims on the land could be filed, three new claims have been filed.

Two of them are not by mining interests, but appear to be publicity stunts or media actions.

Even though a recent Men’s Journal article claims Sjogren knows Bears Ears better than anyone else, her claim seems to have been placed more for its photographic value than for its mineral potential.

She writes about the claim in the REI Co-op Journal.

A second claim was filed on public land near Fry Canyon by NBC Left Field. While the claim is closer to an historical mining area than Sjogren’s claim, it may have been chosen more for its access to paved roads than for its mining potential.

The Left Field news crew spent about a week in the area pursuing a story that was published on March 28. It can be found at https://www.nbcnews.com/leftfield/video/the-utah-uranium-mining-rush-that-never-was-1196245059647

The third claim was filed on Forest Service land near Round Mountain in the Abajo Mountains.