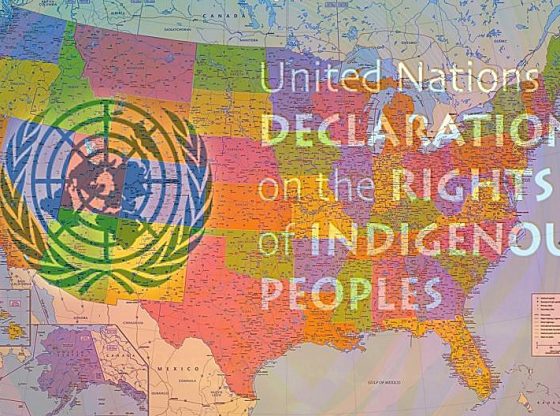 Our fear is not an external enemy—the marriage between embedded international socialists and communists with treacherous American citizens has been the fomenting underbelly of our country. The very lands, property rights of the United States itself, are at full risk and under assault. Some 567 tribal governments are assisting with their fervent desire to reacquire their “aboriginal” lands and to become independent nations recognized by the U.N.

“Congressman Charles Lindbergh, the father of the famous aviator, reported in his 1923 book that he had seen an establishment document which had been distributed to insiders before the turn of the twentieth century in which their long-range plans were described. He stated that it specifically included the removal of all private property rights because, as it pointed out, “people without homes will not quarrel with their leaders.” If the leaders have control of all homes, through central planning, they can decide who will have a home and who will not.” [Politics of Change, A Brief History, by Robert N. Crittenden, p. 312]

What a perfect description of the goal of Agenda 2030 cultists, environmental extremists pushing depopulation and humans living in little urban boxes, and the One World Order freaks intent on dissolving the United States. And the description is nearly one hundred years old, creeping along incrementally.

Our amazing young country we call the United States of America has had to fight daily, yearly, tooth and nail to hold to our God-given unalienable rights penned in our Constitution. The assault on property rights is full force, unfortunately from our federal and state governments abetted by external forces hell bent on helping the U.S. self-impose its own suicide. Ahh, but the resilience of the Forgotten Man is steadfast, ‘though quiet. We are still here. Will our children be?

This country’s undoing has consistently been through internal forces implemented in the Nation’s and State Capitals. Our fear is not an external enemy—the marriage between embedded international socialists and communists with treacherous American citizens has been the fomenting underbelly of our country. The very lands, property rights of the United States itself, are at full risk and under assault. Some 567 tribal governments are assisting with their fervent desire to reacquire their “aboriginal” lands and to become independent nations recognized by the U.N.

In December 2010 former President Obama signed The United Nations Declaration on the Rights of Indigenous Peoples (UNDRIP) that was adopted by the UN General Assembly in September 2007. Thankfully, Congress has declined to affirm this Resolution. Article 26 of this U.N. edict reports:

Considering that the entire North American continent was at one time “aboriginal” Article 26 of this UN Indigenous Resolution would require that our States and the United States “shall give” away America’s homelands… Are we going to lay low and watch our property rights disappear?  Will we just cross our fingers that the Internationalists, Agenda 21 and UN folks do not ultimately prevail? In 1923 Congressman Charles Lindbergh sounded the alarm…and it’s still ringing louder and louder across our land.

If I Don’t Speak…

Bondage is creeping over me…

I feel less, and less and less free

Along the pathway to our homes, towns and country.

When class wars, race wars and transfer of power

Away from The People and our precious Constitution

Morphs into an indentured institution

Sending us roaring back to monarchy days

The King IS dead in America

And must remain so.

The citizen IS sovereign

For so long as WE say so.

Our silence is surrender, Our voice is victory.

Elaine Devary Willman, MPA, is a specialist in the field of federal Indian policy, a constant researcher, speaker, activist, and author of two books: (2005) Going to Pieces…the dismantling of the United States of America, and (2016) Slumbering Thunder…a primer for confronting the spread of federal India policy and tribalism overwhelming America. Ms. Willman attended two years of law school, has a Master’s in Public Administration (MPA) and 96 credits toward a doctoral degree in federal policy.  She is of strong Cherokee ancestry; her spouse is Shoshone and a direct descendant of Sacajawea. Ms. Willman has lived for 25 years on three Indian reservations (Yakama (WA), Oneida (WI), and the Flathead Indian Reservation (MT). Nearly 40 years of her professional career as community/economic development director, land use planning, and administrative services for local governments provides her a keen sense of governmental balance, required mutual respect, and necessary separations of jurisdictional authority on Indian reservations located in host towns, counties and states.