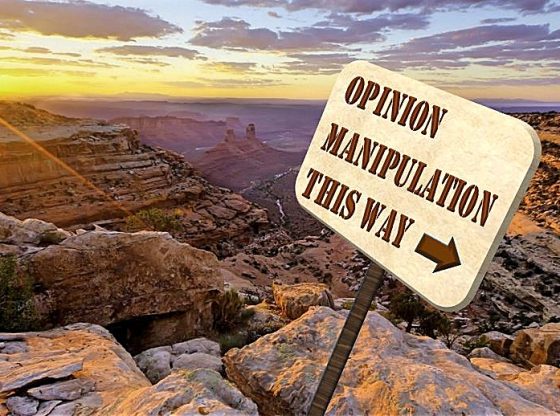 And worst of all, the poll assumes that if you are pro-local control of public lands–as in the Utah monuments’ case–that you hate the government, loathe the environment, and are a militant extremist ogre hell-bent on trashing public lands and selling them off to the highest bidders.

The Left’s divisive tactics are not limited to gender and racial politics. Their ‘us against them,’ ‘all or nothing’ narratives extend to something they say ‘belongs to all of us;’ public lands.

Colorado College, a left-leaning (no surprise) institution in Colorado Springs, has released its eighth annual ‘State of the Rockies Project Conservation in the West’ poll. Labeled a ‘survey of attitudes,’ the poll uses carefully crafted questions to all but guarantee a preconceived outcome tailored to a political agenda. Unfortunately, this ‘push poll’ is formulated on the false premise that public lands are sacrosanct, and to use them for anything outside of the Left’s list of virtuous activities; outdoor recreation, eco-tourism, ‘green’ energy, ‘preservation,’ ‘protection,’ is immoral. In short, the poll pits responsible economic development (of anything other than tourism or green energy) against ‘protection,’ inevitably swaying its respondents towards the ostensible ‘moral’ side of the argument. Who, after all, wants to be against protection and outdoor recreation and other ‘moral’ stuff?

The ‘State of the Rockies’ poll, far from taking an interest in what westerners believe about public lands, always hitches its wagon to some volatile political story, sure to get urban environmentalist types fired up. In 2016 the press release announcing  the poll results referred to ‘anti-public lands rhetoric from militant extremists.’ It appears the creators of the poll were exploiting heated and widely misunderstood conversations about public lands stewardship, as well as skewed reports from mainstream media about ranchers who peacefully occupied the Malheur Wildlife Refuge in Oregon. Simply put; if respondents didn’t answer survey questions just right, they might be regarded as anti-public lands extremists. In 2017, the poll used the Bears Ears controversy to push its federal control agenda, going so far as to publish results which deviated greatly from other surveys taken in Utah. It claimed, “By a 15 point margin, Utah voters more inclined to say the Bears Ears’ designation is a good thing.” But several surveys taken within Utah by Utah firms showed clear opposition to Obama’s midnight monument. And in 2018, the poll seems to be capitalizing on the biggest public lands bugaboo of all, Trump’s Utah monument revisions. Though widely hailed by Utah’s leaders and residents, especially those in impacted San Juan, Kane, and Garfield Counties, the Colorado College poll chose to adopt the anti-local control, anti-Trump rhetoric of the giant outdoor recreation industry and corporate environmentalists.

The 2018 poll sucks in the unsuspecting by asking a litany of questions about ‘outdoor recreation.’ And then, with clever questions and predetermined answers, it lays the groundwork for maximum shame and the potential designation of survey takers as public lands haters if they fall out of step with the ‘outdoor recreation is the be all, end all, the salvation, the only moral use, the all that is sacred and good about our public lands’ narrative. The poll’s methods are manipulative and so its results are dishonest.

The 2017 poll ‘educates‘ the respondent with a series of leading questions–which may not have a factual basis–and then asks for responses in the context of the narrative it has created. Here’s one example: Having heard that, would you say you approve or disapprove of the President‐Elect’s stated approach to federal management of national public lands?

It also contains misleading multiple choice questions such as: The federal government allows oil and gas drilling to take place on public lands, like some national parks and forest land. Which of the following comes closest to your point of view ‐  which is based on a lie. Drilling is not allowed in national parks, period. Trump has no intent to change that and COULD NOT change that without the approval of Congress. It will never happen, yet the poll implies that it is a clear and present danger.

The 2018 poll obsesses on President Trump’s policies, which are well-received in states such as Utah, where locals have pushed for changes to unpopular and restrictive national monuments, but which mainstream media and left-leaning institutions have smeared and fear-mongered in vicious campaigns. The Power Point presentation illustrating the poll results even features an image (below) of protesters outside Utah’s Capitol on the day President Trump announced changes Bears Ears and Grand Staircase-Escalante National Monuments. It omits the fact that Trump’s monument revisions were popular with the majority of Utahans, and that the protests were primarily staged by out-of-state special interest groups.

Objective? Scientific? Not so much.

But the most disingenuous aspect of the State of the Rockies conservation poll is that it presents an all or nothing scenario when it comes to how public lands are addressed. The poll presupposes that you cannot be both an ‘outdoor recreation enthusiast’ and support Trump’s policies. It infers that if you are pro-fossil fuel development that you are anti-environmental protection. It implies that if you are pro-multiple uses; such as mining, energy exploration, motorized recreation, and shooting sports, that you are anti-backpacking and canoeing and other ‘quiet’ activities. And worst of all, the poll assumes that if you are pro-local control of public lands–as in the Utah monuments’ case–that you hate the government, and are a militant extremist ogre hell-bent on trashing public lands and selling them off to the highest bidders. None of which are at all true.

Energy development and protection of the environment are not mutually exclusive. Colorado has some of the most stringent regulations on oil and gas development and mining in the country. As a state historically built on extraction industries, Colorado has relatively few environmental problems. Reclamation of sites is part and parcel of the modern process, and most of the time once an operation moves out, its impossible to tell anything was ever there. Roads may remain, but a lot of the time they serve as fire breaks, and provide routes for wildland firefighters as well as outdoor recreation enthusiasts. It’s also helpful to note that the largest environmental disaster ever to occur in Colorado resulted from the incompetence of Obama’s EPA.

The Colorado College poll, as most polls, surveys and focus group findings sponsored by left-leaning groups, does more to divide the public on a specific topic, than it does to seek and formulate consensus solutions to real-world problems. Not unlike the real phenomenon of fake news, fake polls are not designed to amass real data, but to sway public opinion in a certain direction, which in this case is to the left, and towards big government, big regulation, and big control of public lands policy by big outdoor recreation corporations.