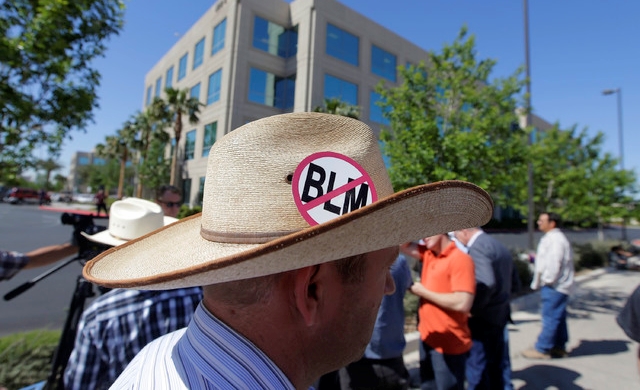 “Disarm the National Park Service,” the recalcitrant cowboy cried in a video played in court recently, during the ongoing trial against six people charged as gunmen in the 2014 standoff in Bunkerville. A witness testified about the “unreasonable” nature of Bundy’s demand. But a Utah Congressman has introduced legislation that would remove the law enforcement function from the Bureau of Land Management and the U.S. Forestry Service — effectively honoring Bundy’s request.

Cliven Bundy’s armed stand against the federal government has landed him in a prison cell, but some of the rancher’s positions on public lands could be enacted into federal law in the new political frontier of President Donald Trump’s Washington.

The first trial in the case against Bundy and his supporters coincides with a new political regime. The timing has presented a paradox: Federal prosecutors characterize the 70-year-old rancher as an anti-government extremist while federal policymakers prepare to act on some of his ideas.

“Disarm the National Park Service,” the recalcitrant cowboy cried in a video played in court recently, during the ongoing trial against six people charged as gunmen in the 2014 standoff in Bunkerville. A witness testified about the “unreasonable” nature of Bundy’s demand. But a Utah Congressman has introduced legislation that would remove the law enforcement function from the Bureau of Land Management and the U.S. Forestry Service — effectively honoring Bundy’s request.

Bundy declares Nevada a “sovereign state.” He asserts that the federal government does not have jurisdiction over the hundreds of thousands of acres of land where he let his cattle roam freely. Prosecutors lambaste him for those claims. But the Republican National Committee last summer called on elected officials to immediately begin transferring federal land to the states.

“It is absurd to think that all acreage must remain under the absentee ownership or management of official Washington,” the 2016 Party Platform stated. “Congress shall immediately pass universal legislation providing for a timely and orderly mechanism requiring the federal government to convey certain federally controlled public lands to states.”

U.S. Rep. Ryan Zinke, R-Mont., the pick for secretary of Interior, said in his recent confirmation hearing that it will be “interesting to see if the president has the power to nullify a national monument.” If approved, Zinke would become the top-ranking official in charge of managing more than 600 million acres of federal land throughout the United States. That land accounts for nearly 90 percent of Nevada.

The shifting attitudes toward public land management hang over the first trial in Las Vegas. The 2014 armed confrontation between protesters and law enforcement occurred when BLM agents tried to carry out a court order to seize Bundy’s cattle from federal land. Will a new political climate affect how the jury weighs the evidence in the case?

Pitaro, who is not involved in the case, said that as the national political dialogue becomes “less mainstream,” jurors are more likely to “normalize” an anti-mainstream position like Bundy’s.

Three years ago, he said, “you didn’t have national conversations out there concerning some of those issues. … They were relegated to the political trenches.”

The trial hinges on an ideological argument, as defense attorneys are trying to convince the jury that the armed confrontation with law enforcement resulted from their clients’ dramatic exercise of constitutional freedoms to assemble and to bear arms.

The jury was selected from a diverse pool with views that span the ideological and political spectrum. The public lands issue in particular tends to rile an array of interest groups, and the transfer of executive power has ranchers optimistic and conservationists worried.

“The minute you start hearing about cutting regulations, that’s huge. Those are the kind of things that you need to hear,” said David Stix Jr., president of the Nevada Cattlemen’s Association.

In the past eight years, Stix said,“the people out on the ground have not had the ability to make the proper calls on how grazing should be done on the federal allotments. The calls have been made from back in D.C.”

But Ken Cole, a coordinator for the nonprofit environmental conservation group Western Watersheds — which has fought both the ranchers and the BLM in court over grazing regulations — said: “Donald Trump appoints people who want to get rid of the agencies rather than actually run them in an effective manner.”

“We’re very concerned about the transfer of either public lands outright or management of public lands to the state,” Cole said.

U.S. Sen. Catherine Cortez Masto, a Democrat who sits on the Senate Energy and National Resources Committee, said in an emailed statement:

“While the new Administration’s exact approach to these issues is still unknown, I will be keeping a close watch on any and all actions that could affect our state’s vast and beautiful lands and natural resources. I grew up enjoying Nevada’s natural lands and national parks, and continue to do so to this day. I am committed to ensuring the same is possible for generations to come.”

But to do so she’ll have to satisfy a wide range of constituents who are deeply divided on issues of public land management. Bundy’s legal battle with the federal government started more than two decades ago. The ideological rift that sparked it is only expected to deepen over the next four years.