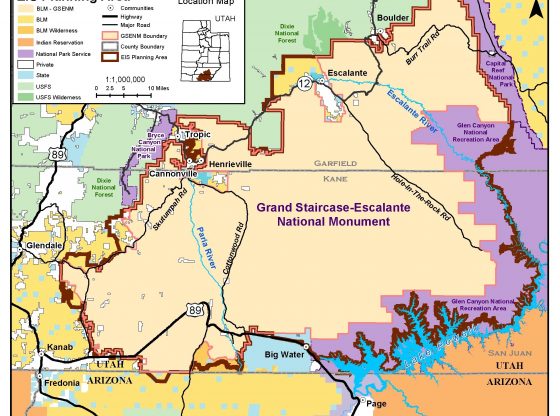 “In 1996, President Bill Clinton used the Antiquities Act to lock up nearly 2 million acres of Garfield and Kane Counties. And it’s worth remembering that Clinton didn’t even have the courage to announce the monument in Utah — he did it across the border in Arizona. No wonder the creation of Grand Staircase-Escalante National Monument was an outrage to rural Utah.”

In April, President Trump ordered his Interior Department chief, Ryan Zinke, to undertake a comprehensive review of all national monuments created or expanded since 1996. It was in 1996 that  President Bill Clinton created the 1.9 million-acre Grand Staircase-Escalante National Monument smack in the middle of Utah’s coal country with little input from leaders and virtually no consent from local residents whose livelihoods would be devastated by its negative economic impact.

With the creation of Grand Staircase-Escalante, some of Utah’s richest clean anthracite coal deposits were put off limits to mining companies and miners, and upwards of a thousand jobs were instantly eliminated. Ranchers’ grazing allotments were dramatically reduced–and continue to shrink to this day–and local economies suffered near-lethal blows from the subsequent loss of mineral severance taxes, as well as small businesses and families fleeing dire job markets.

In July of 2016, U.S. Representative Chris Stewart of Utah, wrote the following op-ed detailing the terrible and personally tragic fallout of Clinton’s abuse of the Antiquities Act in turning 1.9 million resource-rich acres in central southern Utah into an immense, highly-restricted federal tourist attraction.

OPINION — In July 2015, Garfield County was forced to declare a state of emergency based on rapidly declining school enrollment. Simply put, their schools are dying because families cannot stay in the county. And why can’t they stay? Because there are so few jobs capable of sustaining a family. The situation is destroying a great Western tradition of ranching, farming and logging, while forcing families to leave their homes. The result is dying communities and empty schools, with some children being forced to ride on a school  bus for almost two hours.

Since then, some in the media and the environmental community have resurrected the narrative that Garfield County’s fate —and that of similar rural counties — is simply a consequence of changing economic trends: the old economy of ranching, mining and logging giving way to a tourism-based economy. The narrative isn’t new, but it’s false and deserves to be challenged. While it is certainly true that towns like Escalante have for many years been trending toward tourism, it is NOT true that the move has happened on its own. The situation has largely been forced upon residents by misguided federal policies, reminding us once again that federal government has a bad habit of picking winners and losers in the public lands debate.

In 1996, President Bill Clinton used the Antiquities Act to lock up nearly 2 million acres of Garfield and Kane Counties. And it’s worth remembering that Clinton didn’t even have the courage to announce the monument in Utah — he did it across the border in Arizona. No wonder the creation of Grand Staircase-Escalante National Monument was an outrage to rural Utah. Environmental suits had already killed hundreds of jobs in the logging industry and the monument compounded the problem by shutting down a planned coal project that represented hundreds of jobs and millions of dollars for both counties. Twenty years laterthe monument remains a tragic case study of the federal government running roughshod over the wishes of local communities.

Why rehash events of 20 years ago? Aside from the renewed possibility of another monument designation in Southern Utah, there’s a bigger lesson here. There are long-term consequences when government decides that one use of land should exclude any other use. Let’s be clear — I recognize and support the important role that tourism plays in our rural economy. I am proud of the beauty of Garfield County and grateful for those who visit there. But I am offended by the idea that ranchers, miners and loggers can be so casually tossed from the land they have depended upon for generations. And as an elected official, it’s maddening when this happens without any input from local leaders.

So what is the solution? First, let’s remove the Antiquities Act as a political weapon. Last week, I inserted a provision in a spending bill that will prevent the president from using the Antiquities Act to create another national monument in Utah. Alaska and Wyoming have been allowed such an exception. The result is a more collaborative land management process that ensures rural residents have a seat at the table. There’s no reason Utah shouldn’t have this same protection.

There are also actions we can take to help Garfield and Kane Counties, including a bill that Sen. Orrin Hatch and I introduced that will help restore grazing levels in the monument to their pre-1996 level.

Perhaps most importantly, we have to end the faulty premise that public land management is a zero-sum game — that we can either have a natural resources economy or a tourism economy, but not both. That’s simply not true. We need look no further than the Grand Staircase Monument as proof, for even after many decades of a resource-based economy, the Grand Staircase was still viewed as unspoiled and pristine.

Again, there is nothing wrong with preservation or tourism. What’s wrong is when bureaucrats in Washington pursue those goals without considering the impact on our families and local communities. Empty schools and two-hour bus rides for children are not acceptable. We can do far better. We can find creative solutions that benefit both the tourism and natural resources industries and which preserve our Western culture. Land management is not a zero-sum game.

Please add your voice to those asking Secretary Zinke to reduce the inordinately vast size of Grand Staircase-Escalante National Monument, and restore the rights of the people of southern Utah to access local resources and live free from severe and punitive federal restrictions.

You can post your comments by clicking here. The comment period on Grand Staircase-Escalante National Monument ends July 10. Act now!