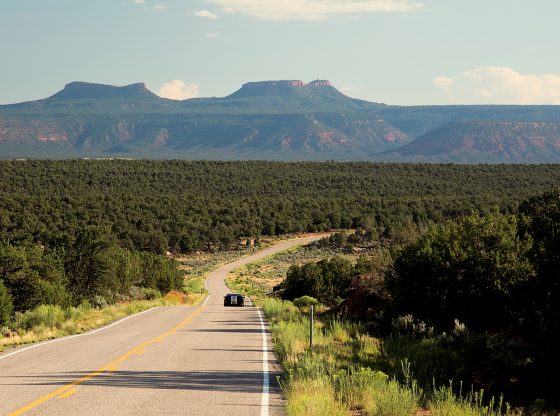 On Monday, June 12, Interior Secretary Ryan Zinke issued his Interim Report on findings related to the Bears Ears National Monument (BENM). This report is his first in a series of reports prescribed by President Trump’s recent ‘Antiquities Act Review’ executive order (EO). The EO encompasses all national monuments created or enlarged since 1996.

Bears Ears has been a painfully divisive issue for Native Americans. The Navajo, Utes and other tribes who live in southeastern Utah have passionately opposed the creation of the monument, but other tribal chapters, mostly from outside of Utah–and many of whom are aligned with environmental groups–have publicly supported the BENM. Despite tribal divisions, the residents of San Juan County, in which the monument consumes about 35 percent of surface acreage, stand united in a determined campaign against Obama’s midnight proclamation.

Unlike Obama, the new administration is taking local needs into account. Only weeks ago, Secretary Zinke traveled to southeastern Utah to see the Bears Ears region and visit with the locals whose livelihoods and cultures will be directly and negatively impacted should the Bears National Monument retain its massive 1.4 million-acre size, along with the severe restrictions that accompany such federal monument designations.

In his Interim Report to the President, Zinke makes a number of recommendations for the Bears Ears National Monument, but begins by describing the fundamental problems with its creation: It reads:

In the final weeks of his second term, President Obama exercised his authority under the Antiquities Act (Act) to designate the Bears Ears National Monument (BENM) in Utah. The external boundary of BENM encompasses almost 1.5 million acres of land. The lands within BENM consist of Federal lands managed by the Bureau of Land Management (BLM) within the Department of the Interior (Department) and U.S. Forest Service (USFS) within the Department of Agriculture; the external boundary also encompasses sections of State land and smaller private parcels, one of which is owned by The Nature Conservancy. While there are designated wilderness and wilderness study areas (WSAs) within BENM, much of the land is compatible with multiple-use practices, including recreation; grazing; timber harvest; mining; and traditional activities such as gathering of medicinal herbs and plants, hunting, fishing, and wood-gathering.

Most of Bears Ears’ acreage is already under Bureau of Land Management (BLM) direction, and the BLM is charged with promoting multiple uses and responsible resource development on public lands. National monument status all but eliminates those activities. The report continues:

The BENM contains unique geologic features and objects of historic or scientific interest deemed culturally important to Native American tribes, including artifacts, rock art, archeological sites, dwellings, and areas used for traditional rituals, gatherings, and tribal practices. Selected Native tribes have a formal advisory role under Proclamation No. 9558, but are not authorized a formal management role under existing law.

Environmentalists and politicians, including Obama’s Interior Secretary Sally Jewell, used the carrot of ‘co-management’ authority to get regional tribal leaders to support the creation of BENM. Zinke’s report makes it clear that ‘co-management’ was a false lure, with no legal provisions existing for such shared power. Zinke then address the perversion of the language and intent of the Antiquities Act in BENM:

The Act authorizes the President to designate objects of scientific or historic interest on Federal lands for protection as a monument as defined in the establishing proclamation, but the authority to reserve lands as part of a monument is limited to an area that is “the smallest area compatible” with the proper care and management of those objects. The protection of qualifying objects within the monument can be identified and reasonably segregated to reflect the “smallest area compatible” intent and to concentrate preservation resources.

Therefore, in consultation with the Secretary of Agriculture, the Secretary of the Interior (Secretary) recommends that (1) the existing boundary of the BENM be modified to be consistent with the intent of the Act; (2) Congress authorize tribal co-management of designated cultural areas; (3) Congress designate selected areas within the existing BENM as national recreation areas or national conservation areas, as defined by law; and (4) Congress clarify the intent of the management practices of wilderness or WSAs within a monument.

In subsequent sections of the report, Zinke explains how Bears Ears was formulated and established far outside the provisions of the Antiquities Act, and how in many instances, it has been abused to give the federal government control over lands and resources which are not addressed in the Act itself. It is then posited that President Trump’s Antiquities Act EO is a response to decades of misinterpretation and outright abuses by former presidents. The EO reads:

Designations of national monuments under the [Antiquities Act], have a substantial impact on the management of Federal lands and the use and enjoyment of neighboring lands. Such designations are a means of stewarding America’s natural resources, protecting America’s natural beauty, and preserving America’s historic places. Monument designations that result from a lack of public outreach and proper coordination with State, tribal, and local officials and other relevant stakeholders may also create barriers to achieving energy independence, restrict public access to and use of Federal lands, burden State, tribal, and local governments, and otherwise curtail economic growth. Designations should be made in accordance with the requirements and original objectives of the Act and appropriately balance the protection of landmarks, structures, and objects against the appropriate use of Federal lands and the effects on surrounding lands and communities.

The Order directs the Secretary to review all designations or expansions resulting in a designation covering more than 100,000 acres or any other designations that the Secretary determines were “made without adequate public outreach and coordination with relevant stakeholders” to determine whether it conforms to the policy set forth in section 1. The Order listed several factors for the Secretary to consider when making that determination:

♦the requirements and original objectives of the Act, including the Act’s requirement that reservations of land ” … be confined to the smallest area compatible with the proper care and management of the objects to be protected”;

♦whether designated lands are appropriately classified under the Act as historic landmarks, historic and prehistoric structures, [or] other objects of historic or scientific interest;

♦the effects of a designation on the use and enjoyment of non-Federal lands within or beyond the BENM boundaries;

♦concerns of state, tribal, and local governments affected by a designation, including the economic development and fiscal condition of affected states, tribes, and localities;

♦the availability of Federal resources to properly manage designated areas; and

♦such other factors as the Secretary deems.

The review goes on to detail omissions made in the planning phases of the BENM, and the complications associated with numerous, sometimes redundant agencies tasked with managing Bears Ears. Finally, Secretary Zinke makes his first set of recommendations in the Interim Bears Ears Report:

The BENM contain some objects that are appropriate for protection under the Act. This includes rock art, dwellings, ceremonial sites, granaries, and other cultural resources that reflect its long historical and cultural significance to Native Americans.  There are also areas that may not include objects but are of importance to tribes for traditional cultural practices. However, having conducted the review set forth in section 2 of the Order, in consultation with the Secretary of Agriculture and based on information to date, I find that the designation of the BENM does not fully conform with the policies set forth in section 1 of the Order.

Specifically, the review shows that rather than designating an area encompassing almost 1.5 million acres as a national monument, it would have been more appropriate to identify and separate the areas that have significant objects to be protected to meet the purposes of the Act, including that the area reserved be limited to the smallest area compatible with the proper care and management of the objects. Additionally, many of the lands reserved as part of BENM are already congressionally or administratively protected – in some cases, such as designated wilderness or WSA, which may provide a higher level of protection –  such that designation under the Act was unnecessary. Moreover, other lands within the BENM are more appropriately set aside under another type of special designation, such as a national recreation area. For those areas that should remain protected under the Act, some management prescriptions appear to be too restrictive, and tribal interests have not been granted an adequate role in management of BENM given the unique significance of the area to tribes and their traditional knowledge, expertise, and use.

As a result of the review, and in consultation with the Secretary of Agriculture, I make the following interim recommendations.  I recommend that:

♦the BENM boundary be revised through the use of appropriate authority, including lawful exercise of the President’s authority granted by the Act;

♦Congress make more appropriate conservation designations within the current BENM such as national recreation areas or national conservation areas, as defined by law; and

♦Congress clarify the intent of the management practices of wilderness or WSAs within a monument.

The Interim Report on BENM is one step toward a final decision about whether or not the national monument with be rescinded or reduced, and by how much. The most significant point in Zinke’s recommendations is the call for revising the boundaries of BENM according to the proper perimeters and authority of the Antiquities Act. In the report, Zinke seems to express that the creation of BENM was a violation of the Antiquities Act. If the final decision is based on fidelity to the actual language within the Act, BENM will be dramatically reduced in size, freeing up this immense region of San Juan County to be accessed and put to use according to the needs of the people who live there.