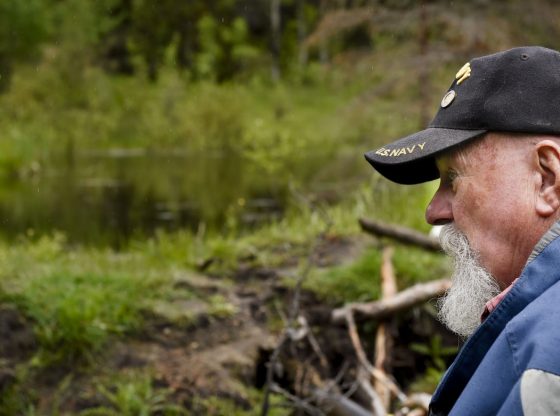 Robertson was released into his own custody to enter into a halfway house in Butte, Montana, with plans to later be admitted to the Veterans Administration Medical Center in Fort Harrison, Montana. Robertson hopes to enter a PTSD inpatient program at the Fort Harrison VA. He remains under Department of Justice supervision, and his formal release date is December 2 of this year.

The elderly Vietnam veteran, Joe Robertson, convicted by the Obama Administration for alleged violations of the Clean Water Act, has been furloughed from the federal prison facility where he has been locked up since September of last year. Following his appeal in the Ninth Circuit Court, on Wednesday, September 6, Robertson was released into his own custody to enter into a halfway house in Butte, Montana, with plans to later be admitted to the Veterans Administration Medical Center in Fort Harrison, Montana. Robertson hopes to enter a PTSD inpatient program at the Fort Harrison VA. He remains under Department of Justice supervision, and his formal release date is December 2 of this year.

Lindsay Szymanski, creator of the Free Navy Vet Joe Robertson Facebook page, has advocated for and reported on Joe’s situation for several months, and in the video below you can see her greeting and talking to him as he leaves the prison and prepares to travel from Denver, where he has spent the last year in federal custody, to Butte. According to Lindsay, Mr. Robertson has lost 60 lbs while in prison, and is suffering from poor health due to a lack of proper care during his first months in prison. She told Free Range Report that prison officials initially neglected Robertson’s severe medical needs, and it was only after receiving a visit from Colorado Congressman, Ken Buck, that he began to receive the attention he needed.

An independent and patriotic man, Joe Robertson loves the outdoors and for years has taken care his own property in the Montana backwoods near the town of Basin, with his beloved service dog, Sasha at his side. He was prosecuted by the Environmental Protection Agency (EPA), for changes he made to a stock pond on a mining claim, which he owns.

Joe Robertson was convicted last year of alleged violations of the Clean Water Act related to activities on his Montana property. According to a May, 2016 report in Redoubt News:

Due to multiple fires in the area over the past several years, Robertson has maintained and improved his property by building stock ponds for his animals and fire prevention for his and the neighbor properties.

But, he has also scrapped with the government, by way of the Forest Service and the EPA, for years. The harassment by the government began over a decade ago, complaining that he was not allowed to repair the road that leads to his private property. This came to a head in 2013 when they charged this disabled veteran for violation of the Clean Water Act.

The government contends that nine stock ponds affect approximately one-tenth (1/10) of an acre of discharged pollutants into the Jefferson River, nearly 60 miles away.

The Prosecution’s contention that Robertson violated the Clean Water Act by ‘discharging pollutants’ into the Jefferson River, was at best, weak. The Redoubt report continues:

The report outlines that the alleged wetlands “is not waters of the U.S.” and it is virtually impossible for them have a “significant effect on the physical, chemical, and biological integrity of the Jefferson River.”

The first trial ended with a hung jury, but the feds quickly retried the case, and despite evidence of missteps and possible malfeasance on the part of EPA agents, Robertson was subsequently sentenced, and faced up to 15 years of prison time, a $250,000 fine and the potential forfeiture of his property.

Following his sentencing, Robertson was taken into custody, and moved to several federal prisons around the country. After time in the Pahrump, Nevada facility, he was moved to the FCI Englewood facility outside Denver, Colorado, and has been there since September of 2016. Redoubt News also reported, and Lindsay Szymanski confirmed, that Robertson, 77 at the time he entered prison, was denied proper medical care or follow up treatments for a previous stroke, until Congressman Ken Buck apparently intervened in his behalf.

After 16 months in federal prison, Joe Robertson’s appeal was heard by the Ninth Circuit Court of Appeals in Seattle. Michael Donohoe, of the Federal Defenders of Montana, presented Robertson’s case to the court, which was bolstered by an Amicus Brief (see below) in Robertson’s defense written by Pacific Legal Foundation.

Pacific Legal Foundation took up Robertson’s case, and in its Amicus Brief also cited the Duarte Nursery case, in which farmer, John Durarte, was tried for the ‘EPA crime’ of plowing too deep on his own property. In its press release, Pacific Legal was optimistic about Robertson’s appeal:

According to Lindsay Szymanski, Roger Roots of the Constitution Society has also written an Amicus Brief in Robertson’s behalf, which may be an important hedge in his continued defense, since it is reported that the Forest Service has submitted a civil case against Joe Robertson.

Below, independent journalist John Lamb, Roger Roots, and others are seen greeting Joe Robertson upon his arrival in Montana. His case is not over, and he remains a felon under federal law. His appeal has not yet received a final determination and Joe and his family still need prayers and support. Go here to donate to Joe Robertson’s defense fund.