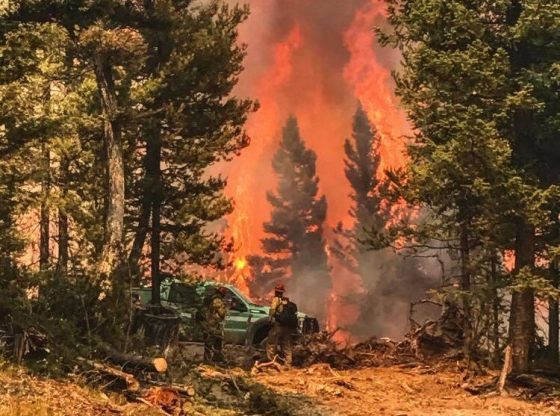 “It is the lawyers who are funding for these extreme environmental groups, who are having a tremendous impact, (a) devastating impact on allowing us to move forward here on some common-sense timber projects…”

In the midst of Montana’s severe fire season, a heated debated has reignited over forest management, with a group of Montana Republican lawmakers arguing that lawsuits halting logging projects are elevating wildfire dangers, while critics counter that GOP lawmakers are at fault for not recognizing climate change and failing to properly fund federal agencies.

“Montanans are saying we are tired of breathing the smoke,” Daines said on the tour, according to Montana Public Radio. “We are tired of seeing these catastrophic wildfires. And either we are going to better manage our forests, or the forests are going to manage us.”

Daines blames “extreme environmental groups” that have sued the U.S. Forest Service for halting logging and thinning projects that he says could reduce large amounts of fuel and help prevent wildfires.

“It is the lawyers who are funding for these extreme environmental groups, who are having a tremendous impact, (a) devastating impact on allowing us to move forward here on some common-sense timber projects,” Daines said.

The comments made by Daines, and similar ones made by Gianforte and Zinke, sparked backlash from others who say the GOP-led Congress has neglected to properly fund the U.S. Forest Service for fire prevention and forest management. Rising firefighting expenditures are eating up the Forest Service’s budget at an unsustainable pace — fire suppression consumed 52 percent of the agency’s budget in 2015, a number expected to increase to 67 percent in 2025. The swelling costs of wildfires have directly led to a 68 percent reduction in facility maintenance, a 15 percent cut to recreation and an 18 percent cut to wildlife and fish habitat management, according to the agency.

There appears to be widespread agreement that the fire-funding conundrum is serious and in immediate need of a solution, but some members of Congress have been accused of playing politics by making demands that would limit public involvement in the management of national forests to streamline timber harvests.

Critics also say the GOP, including Montana’s delegation, is failing to recognize the impacts of climate change, an issue that has elicited wavering responses and inaction among a number of Republicans.

A collective of conservation groups is challenging a proposed logging project along the east shore of Lindbergh Lake at the headwaters of the Swan River, saying the project would harm sensitive wildlife and damage habitat while also bucking environmental regulations. Four groups — Friends of the Wild Swan, Swan View Coalition, Native Ecosystems Council, and the Alliance for the Wild Rockies — filed suit in federal district court in Missoula on Aug. 31, challenging the Beaver Creek Timber Sale in the Swan Lake Ranger District of the Flathead National Forest.