Wild Horses in Crisis Part I: The problems 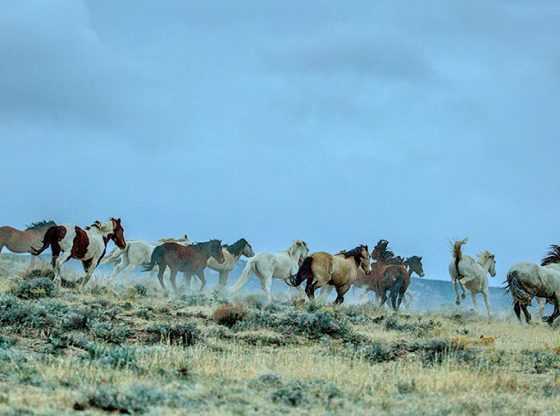 “I think there will be an implosion…If we continue down the path of unregulated growth,wild horse populations will continue to expand to 100,000, 120,000, 150,000, [or] maybe more…When that happens, natural regulation will take place. Wild horses and burros would begin starving by the tens of thousands, along with the mule deer, elk, pronghorn, and other native wildlife.”

Editor’s Note: This article is based on author Ben Masters’ extensive research and interviews with ecologists, rangeland managers, ranchers, officials, and wild horse advocates throughout the West. Over the years, he has adopted many wild horses for long, cross-country rides throughout the American West, and he helped produce Unbranded, a documentary film that raised nearly $100,000 for the Mustang Heritage Foundation. In addition to promoting wild horse and burro adoptions, writing articles about them for National Geographic and Western Horseman, Masters serves as the Wildlife Management Chair on the Bureau of Land Management’s volunteer Wild Horse & Burro Advisory Board. Learn more about the plight of wild horses and burros, as well as eight management options to consider, in the August 2017 issue of Western Horseman.

“I think there will be an implosion,” Perryman says. “Eventually we’ll have to make a hard decision, or the hard decision will be made for us. If we continue down the path of unregulated growth, [Bureau of Land Management] wild horse populations will continue to expand to 100,000, 120,000, 150,000, [or] maybe more depending on how many good precipitation years we have. But eventually a bad winter or extended drought will occur. When that happens, natural regulation will take place. Wild horses and burros would begin starving by the tens of thousands, along with the mule deer, elk, pronghorn, and other native wildlife.”

The BLM estimates there are 72,000 wild horses and burros (not counting the 2017 foal crop) that roam 31.2 million acres in the American West. It is public land designated for their use. But this population size is nearly three times the sometimes controversial appropriate management level (AML), defined as “the point at which wild horse and burro populations are consistent with the land’s capacity to support them and other mandated uses of those lands.”

For decades the BLM has tried to manage population sizes in the wild by gathering excess horses and offering them for adoption. The problem is that there aren’t enough adopters, so holding pens are filled to capacity. Approximately 45,000 wild horses and burros live in short-term pens and long-term pastures nationwide. They spend their lives in a non-wild, non-working situation. Those that become too old to function are euthanized.

Each of these horses costs taxpayers an estimated $50,000 during its lifetime. In 2000, the BLM’s wild horse and burro program’s annual budget was $20.4 million. Today, the BLM’s budget is $80.4 million each year, and about $50 million of that goes toward feeding the horses in holding.

Meanwhile, rangeland experts such as Perryman dread the consequences of the growing horse populations that remain in the wild. Their exponential rate of reproduction threatens the delicate desert ecosystems of the American West, predominantly in the Great Basin.

In September of 2016, the BLM National Wild Horse and Burro Advisory Board, made of up volunteer citizens, determined that the situation had become unsustainable and voted 7-to-1 that wild horses in holding be either sold or euthanized. The vote received widespread publicity, both positive and negative. Many conservation and rangeland organizations supported the board’s recommendation, while most animal advocacy groups and wild horse activists vehemently denounced it. The BLM stated that it would not adhere to the recommendation. In May of this year, President Donald Trump proposed a fiscal 2018 budget that sought to save $10 million from the BLM program, asking Congress to allow “humane euthanasia and unrestricted sale of certain excess animals,” which would effectively open the door for horses to be put down or sold without stipulation.

Whether Trump’s budget proposal is adopted by Congress remains to be seen. Regardless, America’s wild horse dilemma won’t be resolved without much more extensive measures. This hot-button issue remains emotional, complex and misunderstood. Does a solution exist that protects the ecological integrity of America’s vast public lands while simultaneously addressing the overpopulation of its wild horse herds?

“Simply put, the BLM’s Wild Horse and Burro program—in its current form—is unsustainable,” says a statement released by the BLM. “To address these challenges, the President’s Fiscal Year 2018 budget proposal requests the authority to use all management tools provided by the Act. This authority includes removing some restrictions on the sale and disposition of excess animals. Annual appropriations bills since 2010 banned humane euthanasia and the unrestricted sale of certain excess animals.

“The BLM’s first goal is always to find good homes for the thousands of wild horses and burros gathered from overpopulated herds on our country’s public lands.”

The $50 million expense incurred while caring for 45,000 horses in holding pens, more than 60 percent of its annual budget, has financially crippled the BLM’s ability to conduct roundups on the range. This has led to exponential population growth in the wild. This year approximately 10,000 foals will be added to the wild horse herd, while officials expect only 2,500 horses to be adopted.

Perryman says that managing the rangeland has become more complicated with wild horses.

“Now that the BLM has stopped conducting enough roundups, they’ve allowed wild horses and burros in some areas to become three, five, even 10 times over the appropriate management level [AML]. Their resources are still limited and exponential growth can’t go on forever. This creates a massive problem for the rangeland because they’re putting unmanaged pressure on forage all day, every day, for the entire year. Eventually, that landscape reaches a threshold where native high-forage-value plants lose the ability to compete with unpalatable, undesirable or nonnative species.”

Perryman says he believes that the situation for wild horses will only get worse, even if more land is designated for them.

“We have dysfunctionality in the box,” he says. “We can make the box bigger by taking away more land and forage from wildlife and livestock, but then we would just have more dysfunctionality in an even bigger box. This would buy us time, but eventually natural regulation will take place and horses could die by the thousands.

“When the public sees the horses starving to death, there will be an outcry for the BLM to gather them to save their lives. The horses will then be warehoused for the rest of their lives and saved. But what about the rangeland and everything that depends on it? How is it fair to the reptiles, songbirds, small mammals, pronghorn, ranchers, and future generations of people to inherit a degraded rangeland that we knew was being damaged and could’ve been prevented?”

Many wild horse advocacy groups have argued that wild horses are better off left alone. Through the years, large numbers of lawsuits against the BLM have halted various roundups, prevented research for spaying mares, and blocked the use of fertility control and the use of GPS collars to study wild horse movement.

The situation with wild horses has been a contentious issue for decades, with fingers pointed at the BLM, advocacy groups, politicians and ranchers. Nearly everyone agrees that the plight of these horses is not improving. Few aware of the situation advise staying the course. So what are the management options that could be used to bring the wild horse and burro program back on a sustainable track?