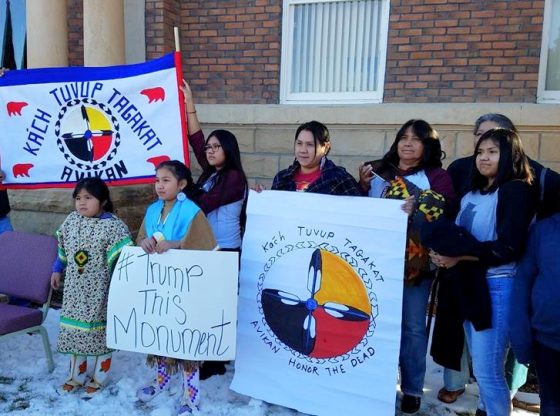 For decades we’ve seen special interest groups like Sierra Club and SUWA lobby for the full extinguishment of our rights to public lands using false narratives. These narratives pushed by special-interest groups have been quite discouraging for Native Americans like myself who actually go to Bears Ears itself and understand the area and see how much a national monument does more harm than good.

For decades we’ve seen special interest groups like Sierra Club and SUWA lobby for the full extinguishment of our rights to public lands using false narratives. These narratives pushed by special-interest groups have been quite discouraging for Native Americans like myself who actually go to Bears Ears itself and understand the area and see how much a national monument does more harm than good.

False narratives like “national monuments are the only way to protect the lands from being sold off.” Now we are all aware of Interior Secretary Zinke’s philosophy of public lands remaining public. His position that public lands are to never be sold or given away is simple. Simple enough, yet crucial since it flies in the face of everything monument advocates use to garner support.

We finally have a true sense of the way the Bears Ears region will go with or without a national monument and it certainly isn’t one to be “sold off.” Particularly when uses of the area in the past reveal the land areas in and around Bears Ears have been properly maintained. Secretary Zinke himself was astonished at how universal the desire is to protect the Bears Ears area from both folks who’d like to see the national monument rescinded and the pro-monument special-interest groups.

Another disingenuous narrative that speaks to the heart of the issue would be “tribal co-management.” The initial reasons for a Bears Ears National Monument have always been about “tribal co-management,” yet the end results are far from ringing true. If you believed the rhetoric coming from special-interest groups, you’d actually think the Bears Ears Commission actually has the same level of authority as the United States Department of Interior in managing the Bears Ears National Monument.

Upon reading pages seven and eight of the Bears Ears National Monument proclamation, lo and behold you’d actually find that, “Bears Ears Commission is hereby established to provide Guidance and Recommendations.” Wait a second, Recommendations? Guidance? That doesn’t sound like co-management at all. The term “tribal co-management” isn’t even stated in the actual monument proclamation at all. In fact the very language for the proclamation simply implies that the Bureau of Land Management and the U.S. Forest Service would give a Native American voice on land management within Bears Ears National Monument a rather monotonous, “dully noted.”

It’s quite unfortunate when the very same BLM rarely even enforces its obligations for government to government tribal consultation. On many occasions when it pertained to drafting and creating rules, the BLM typically implements changes that have potentially devastating impact on tribal sovereignty without it being circulated to any tribes. They’ve done this so much that a leader from the Ute Tribe actually conveyed that “tribe’s concept of meaningful consultation has been shortchanged by the BLM.” The behavior of the BLM in the past eight years would reflect the BLM’s behavior towards tribes, which of course would unsurprisingly be no different with the Bears Ears National Monument.

Forms of “strategic communication” pushed by pro-monument advocates meant to be conveyed as an absolute simply do more harm than good, especially when it’s meant to demonize a large segment of Native Americans, landowners, local business folks, farmers, recreationalists and democratically elected leaders. All with a great understanding of the land with far more appreciation that could never be realized with a national monument.

Suzette Morris is a member of the Ute Mountain Ute Tribe in White Mesa, Utah, and the senior vice president of the Stewards of San Juan County.