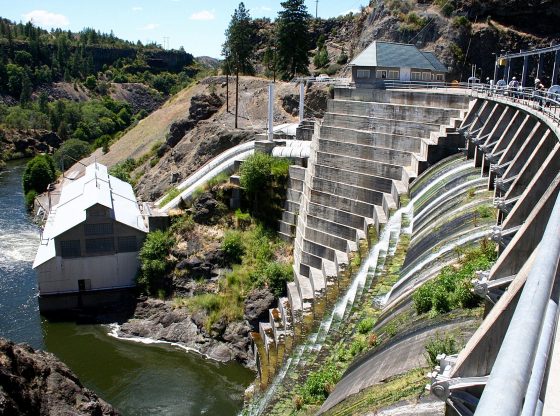 PacificCorp has made a deal with what is virtually no more than a shell-company with a fancy website called the Klamath River Renewal Corporation (KRRC) to transfer their ownership of their operations at the dams to KRRC and have them destroy the dams since PacificCorp was unable to accomplish the ugly task themselves. This even after charging rate-payers hundreds of millions of dollars over the past many years ostensible to remove the dams.

It was nearly 20 years ago when PacificCorp a division of Berkshire Hathaway Energy a Warren Buffet company ostensibly decided they could make more money by going into the gas-powered turbine energy generation business. But this would require decommissioning four perfectly good hydroelectric dams on the Klamath River to prevent lowering the price of energy by adding more energy to the existing market supply.

The four dams and the fresh water stores behind them were created in 1957 by the Klamath River Basin Compact, which was essentially a treaty between the states of California and Oregon that was ratified by an Act of Congress.

This Compact, which arguably is still the controlling authority, provided many much needed benefits to the people of this important area of the Pacific Northwest. Water storage for both domestic and agricultural uses was of paramount import in the considerations of the Compact. But flood control and green low-cost electric power generation were not far behind. And these state of the art dams have been and continue to provide green hydroelectric power to nearly 80,000 households and businesses in Jackson County Oregon and Siskiyou County California.

However, since the dams and the lakes behind them came into existence, they have evolved to provide many unforeseen yet extremely important benefits to the area over the past 60 years.

Extremely rare and valuable among all ecosystems on the planet, the fresh water shoreline ecosystems formed by the four lakes behind the dams support a myriad of lifeforms that have carved out niches formed by the unique habitats in this rare environment. These shoreline ecosystems support numerous other interdependent ecosystems, all of which provide habitat for a vibrant array of birds (including migratory species), reptiles, amphibians, mammals and a host of aquatic life including species of fish that provide recreational fishing for hundreds of people. The lakes themselves host numerous recreational activities including boating, camping and hunting, which in turn bring revenue into the local economy. All of this on a river that has a long pre-dam history of running warm and nearly dry during the late summer and fall months of most years, creating conditions unsuited to any fish on the upper reach of the Klamath basin east of the Interstate 5.  And in contrast to the pre-dam summers, during the pre-dam winter and spring runoff season, rushing waters and catastrophic floods caused death and destruction without the critical water control afforded by the thoughtful placement of the dams.

These dams also sequester the toxic anthropogenic pollution stemming from intense agricultural enterprises at the upper end of the Klamath River basin in Oregon. The ubiquitous use of nitrates and phosphates as soil amendments along with dissolved feces from animal production is deposited into the upper Klamath River dissolved in-solution as runoff during the rains.  The plankton that uniquely live in the lakes formed behind the dams are able to metabolize these pollutants that are otherwise toxic to most species of fish and generally rendering them harmless to the environment. The proof in this is empirical, and regardless of the current and past agricultural tempo there has never been a fish die-off in the lakes behind the dams or in the Klamath River.

Still other concentrations of these same pollutants are sequestered into the layers of nearly impervious clay-mud deposits on the bottoms of the lakes where anaerobic organisms act upon them breaking them down further. These combined processes naturally and cost effectively resolve an otherwise major and costly problem for the agricultural enterprises in Oregon. Thus mitigating a major portion of the anthropogenic agricultural pollution coming into California from Oregon. In the end, the lakes behind the dams create cleaner and cooler water, which exits the final dam in the string of dams on the Klamath River; the Iron Gate Dam.

Now a few wrong-headed people blinded by money and ego want to destroy all of these wonderfully valuable assets of the people and the environment by removing the dams and in the process devastating the environment and depriving the people of the low-cost green energy they depend upon.

PacificCorp has made a deal with what is virtually no more than a shell-company with a fancy website called the Klamath River Renewal Corporation (KRRC) to transfer their ownership of their operations at the dams to KRRC and have them destroy the dams since PacificCorp was unable to accomplish the ugly task themselves. This even after charging rate-payers hundreds of millions of dollars over the past many years ostensible to remove the dams.

A spokesman for the KRRC, a Mr. Dave Meurer even suggested the “possibility” of using dynamite to remove the dams, this in an environmentally sensitive area of California. The fact that they would even mention such a draconian methodology (explosives) on a wild and scenic river shows how clueless these people truly are.

And all this against the will of Congress who would not act on PacificCorp’s request to all them to remove the Klamath River dams.

Adding further insult to the American political process, PacificCorp thumbed their noses at the citizens of Siskiyou County California where three of the four dams and lakes are located, who via a 79% super-majority voted against any dam removal in a 2010 referendum. And the public sentiment in this regard has not changed since then.

The American citizens of Siskiyou County are once again on the move and a new initiative to create a citizen-owned public utility district (PUD) to take-over and operate the dams locally is now underway. Please consider the merits of this citizens-based effort here: https://www.gofundme.com/citizens-PUD