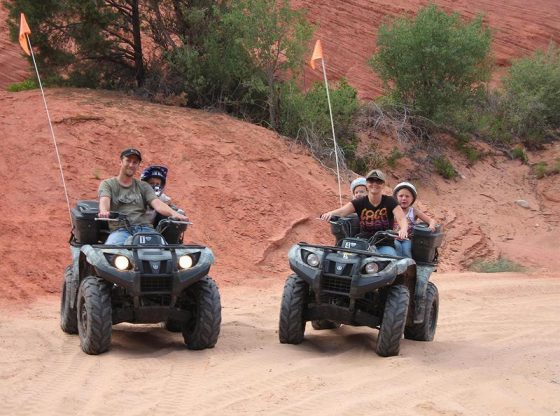 In recent years, aggressive green groups and federal agencies, including the Bureau of Land Management (BLM) and U.S. Forest Service (USFS), have sparked conflicts over a number of Utah’s historical county roads, with the most notable case involving the road into San Juan County’s Recapture Canyon.

Over a decade of bureaucratic overreach on state and county-owned roads has resulted in a number of lawsuits brought by several Utah counties against the federal government. Recently, the extremist environmental group, Southern Utah Wilderness Alliance (SUWA), joined the feds as an appellee in a lawsuit brought by Garfield and Kane Counties, and the State of Utah. The State and counties sued over ongoing attempts by federal bureaucrats to claim title to thousands of miles of historical county roads throughout Utah. Contending that the RS-2477 statute, under which the roads were established, no longer applies and that federal management agencies now control the roads in question, SUWA chose to intervene in behalf of the feds in the lawsuit. The United States government sought title on public lands roads and trails so the federal bureaucracy would have the final say regarding road closures, and what forms of travel would be allowed. On July 26, the Utah Supreme Court decided against the feds and SUWA, and the following day, the Utah Attorney General’s website posted this summary:

SALT LAKE CITY  July 27, 2017 – In an opinion filed on July 26, the Utah Supreme Court agreed with the State of Utah and some of its Counties in their dispute against the federal government about the State’s ownership of historic roads across federal land. As federal law allows, the State and its Counties sued the United States to obtain title to more than 10,000 such roads—roads still used today for recreation, ranching, sightseeing, hunting, and fishing, among other things. But the United States, joined by the Southern Utah Wilderness Alliance, argued that the State’s and Counties’ title claims were untimely based on a provision of Utah law that never had been applied to such claims.

The Utah Supreme Court’s opinion rejects the federal government’s efforts to paint the State’s claims as untimely under Utah law. According to the Court, the United States’ and SUWA’s arguments “would effectively deprive the State of its” claims to thousands of roads—even roads that have existed and been used for more than 100 years. The Court called that result “completely nonsensical” and “so overwhelmingly absurd that no rational legislator could ever be deemed to have supported” it.

“I applaud the Utah Supreme Court’s common-sense decision in this important case,” said Utah Attorney General Sean D. Reyes. “The Court correctly recognized the absurdity of the federal government’s arguments, which have now added two years of delay and taxpayer expense to the State’s efforts to obtain the title to roads that federal law has long promised. I hope the Court’s decision convinces the United States now to work collaboratively and quickly with Utah and its Counties to resolve these title claims.”

In recent years, aggressive green groups and federal agencies, including the Bureau of Land Management (BLM) and U.S. Forest Service (USFS), have sparked conflicts over numerous historic county roads in various regions of Utah, with the most notable case involving the road into San Juan County’s Recapture Canyon. In 2007, the BLM closed a popular route in the bottom of the canyon to motorized travel, contending it was a ‘trail’ under federal jurisdiction, when in fact it was, and remains an RS-2477 *public right-of-way that was established when San Juan County was settled in the 1880’s.

Garfield and Kane Counties got involved when the USFS closed thousands of miles of roads in the Dixie National Forest. In 2005 the federal government banned motorized travel in the area, and in 2009 the USFS issued a travel plan which effectively decommissioned historical RS-2477 roads and trails throughout central southern Utah. In 2011 the State of Utah joined these counties and sued the federal government along with SUWA, which intervened in behalf of the feds, and sought a dismissal of the lawsuit. Radical greens, such as SUWA, and some federal agents and politicians have belittled the RS-2477 statute as ‘outdated,’ and insist it was fully repealed when the Federal Lands Policy Management Act (FLPMA) was passed in 1976.

But RS-2477 is still the law of the land, and this decision reaffirms that FLPMA did not erase the statute, but simply articulated certain conditions under which historical rights-of-way are to be considered operational. And in this case, the State of Utah has sufficiently proven that the roads in question have met those conditions, are currently in use, and title to them belongs to the state and its county subdivisions. As the summary makes clear, the State and counties’ title to the roads is current, and to argue otherwise is ‘absurd.’

Many states and counties throughout the West are engaged in or considering using RS-2477 law to regain control of roads in their localities that cross federal lands. Although the Utah case is on its way to the Federal District Court, this decision could have far-reaching implications.

*Public right-of-way is a legal term of art to describe the right of all members of the public to travel and access a route regardless of land ownership.

The Utah Attorney General’s website sums up the rationale for the RS-2477 lawsuit nicely:

The State of Utah and most of its counties have filed 22 quiet title lawsuits in federal court seeking judicial determinations of their rights in and to some 12,000 roads.  It is a legitimate question to ask why.  To answer this question one needs to examine the history behind the creation, and the duration and current importance of these roads, and as well as the legal bases for the lawsuits.

The settlement of the West shaped the public land laws in the United States.  To foster this settlement, the federal government instituted specific laws that gave rights to individuals, companies, and governmental entities to acquire, develop, and pass through the government’s vast western lands.  Then came the homesteads, ranches, miners, and communities that were facilitated by right-of-way grants for roads, railroads, and canals.

R.S. 2477 and the Roads Built Under Its Authority

In 1866, Congress passed the Mining Act, including Section 8, that later became Revised Statute 2477 (“R.S. 2477”). R.S. 2477 granted rights-of-way across federal lands for the construction of highways.  It states simply “the right of way for the construction of highways over public lands, not reserved for public uses, is hereby granted.”  Through this enactment, Congress granted the public the right to construct roads whenever and wherever convenient and necessary to the settlement and development of the West. R.S. 2477 is the reason why most roads exist in the western United States.  This law was instrumental in the settlement of the West.

Congress could not have contemplated today’s four or six-lane highways when it used the term “highways” in 1866.  At that time, “highway” was an all-inclusive term that encompassed all ways of public passage, which were almost exclusively dirt roads and two-track wagon trails.  As the western United States grew in population and progressed in technology, the need for a well-developed transportation system also increased.  Shortly after the turn of the century, roads began to accommodate motor vehicles.  As public travel increased in Utah, the counties commenced maintaining the major and frequently traveled roads.  Smaller routes were maintained simply by ongoing public use whenever necessary or convenient .  The public used the roads to homestead, range cattle, prospect, move between settlements, hunt, fish, gather fire wood to heat homes, cut fence posts, or simply to enjoy Utah’s spectacular scenery.  Entire communities used these roads for town-wide picnics, scouting, camping and family reunions.

R.S. 2477 was the authority for constructing the roads to such famous mining sites as Alta, Bingham Canyon, Park City, and Carbon County, to name a few.  Other mines in northern, central, and southern Utah were similarly established.  Mineral products worth millions of dollars came across these roads.

As the population grew, many roads were widened, graded, and surfaced.  Original road graders were as simple as a metal grade pulled behind a team of horses.  Motorized bulldozers or road graders first started appearing in the 1930s.  These machines were used to build roads to power sites, mines, water storage facilities, cabins, resorts or to provide any other necessary public access.  As WWII approached, the need for roads increased with growing demand for mineral and other natural resources, as well as the need to access military installations.  Roads were also constructed in Uintah and Duchesne counties to access gilsonite mines, as well as oil and gas fields in the later years.

In the early 1950s, roads continued to be built to accommodate the mining of uranium and the drilling for oil and gas.  Many of the roads throughout Grand, San Juan, Kane, Garfield, Wayne, and Piute counties were constructed to prospect for either oil and gas or uranium.

In the 1950s, the U.S. military started selling surplus Willys Jeeps.  Consequently, the areas previously inaccessible became open due to four-wheel drive exploration.  Individuals driving jeeps and pickup trucks got to explore and discover many remote areas and destinations in Utah, including such landmarks as Angel Arch in San Juan County and many arches in Grand County.  The public used existing roads or constructed new roads to visit these landmarks.

Other counties experienced a growth in tourism and other activities, including the movie industry filmings in Southern Utah.  During the twentieth century, Hollywood fell in love with the authentic Old West flavor of Kanab in Kane County and the surrounding area of “Little Hollywood,” where more than 100 movies and TV shows had been filmed.  The actors, directors, extras, and film professionals working on movies filmed in Kane County used many roads constructed under R.S. 2477.  Movie buffs continue to travel to Kanab to visit nearby Pariah, Johnson Canyon, and Kanab Canyon movie sets.

However, all of the R.S. 2477 rights-of-way in existence at the time of the Federal Land Policy and Management Act’s passage in 1976 were to be recognized.  In contrast to the mining claims that require patent application, the federal government simply granted open-ended rights-of-way to the R.S. 2477 roads without any formal process to obtain federal recognition of these claims.  Because these roads were open to any and all who wanted to use them, there had been no need to prove ownership of these routes against the federal government.  The pre-1976 judicial decisions on R.S. 2477 right-of-way usually dealt with private landowners closing roads to public use.

In 1976, with the congressional passage of the Federal Land Policy and Management Act (FLPMA), the United States adopted a policy of land retention and preservation.  FLPMA repealed R.S. 2477, but grand-fathered existing roads.  Under FLPMA, the public could not build any new roads across federal lands without obtaining a permit from the federal government.