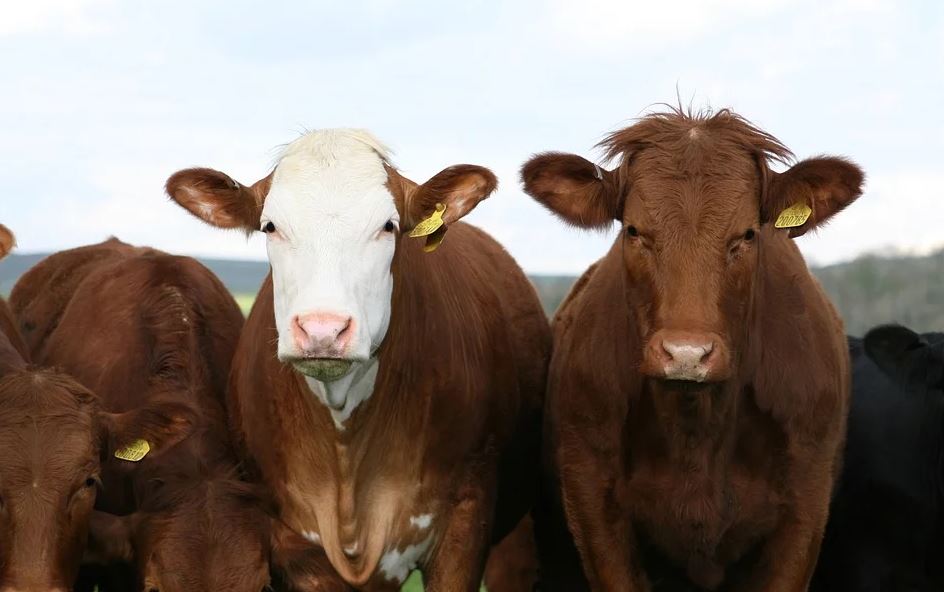 These actions do not stay specific to horses alone. They apply to livestock as well. As I said above the act of desensitizing when taken to far promotes standing without movement. Creating a situation for cattle that re-installs the natural instinct of the defensive posture of the herd group or the Standing Solution. An instinct that management practices and concentrated efforts of individualizing has diminished.

The word fear has a very broad spectrum. It’s a word that groups a lot into four letters. When we think of fear, we recall something personal.  An instant or a situation that had been burned into memory.  But with little effort we can create or imagine and easily expand a fearful situation.

When one thinks of the word “hot” we understand it resonates a level of fear. Hot as a word has different levels. We would call a cutting torch in operation hot.  We could also apply that description to a cup of coffee. The severity between the two is drastically different.

In our language we use synonyms to create levels for the word hot such as it’s balmy outside.  Fear also has some of those attributed connections such as spooky or scary. But as hot has a measurable scale such as Fahrenheit or Celsius, fear has no such scale.

The levels of fear are dramatically different. From just a startling encounter, to the fear for ones life. The two are both fear, but quite different in response and degrees of fear.

Humans transfer their personal fears to a perception of the situation. Each person probably relates to each situation differently.  When animals enter into the equation those same transferable thoughts transfer to perception and again each person has a different degree of perception.

Many would say that in training animals that fear has no place. From my experience there is no way around it. Whether it’s horses or livestock, our interactions are just that our interactions. As we interact with animals we are introducing a new and foreign action to the animal. For example when we desensitize a young horse in order to eventually work together. That initial desensitizing “sacking out” can only be perceived as overcoming the young horses fear. Being able to read the horses reactions and actions certainly aid in establishing a connection that can be built on. Threatening or forcing threw these initial interactions won’t help in creating a working relationship. But still the initial interaction is overcoming fear. In taking the desensitizing of the young horse to far, that will also hinder the working relationship. Desensitizing taken to far promotes standing without movement, then the next step of training you are promoting movement.  You are presenting a new situation which are two conflicting actions. The horse’s perception is that your picking a fight, reversing the desensitizing and personal connection that you worked on establishing.

These actions do not stay specific to horses alone. They apply to livestock as well. As I said above the act of desensitizing when taken to far promotes standing without movement. Creating a situation for cattle that re-installs the natural instinct of the defensive posture of the herd group or the Standing Solution. An instinct that management practices and concentrated efforts of individualizing has diminished.

Trying to understand the levels of fear is a challenge. But as with training animals one of our first steps should be establishing a response, a recognition if you will. That interaction could be recognized as a first low level response such as a tip of an ear, the raising of a head or defecating. This alertness could be the first step of an escalating fear. In relating it to a thermometer, it’s a low temperature that if it continued escalating the temperature would rise.

Movement would be the next response, not necessarily a response of flight, although wildlife would have that response. But this movement of our stock would be just moving away from pressure. By releasing the pressure, the stock would settle back into their content well being.

This is the basics of low-stress Stockmanship, Pressure and release.

By continuing movement without a release you are escalating the movement into a chase sequence. A fear for our stock and it is perceived as a predator/prey interaction. Often compounded by being individualized. The level of fear has escalated into an effort to stay alive. We’ve all seen cattle run threw fences or that have left corrals in this state, this is a reaction to perceived pressure. When the action of flight is contained then the stocks response changes to a fight scenario.

I have often hear that we need to make our cattle more defensive, maybe meaner and maybe breed horns back into cattle. My thoughts on these efforts are simply to say, I believe that it is the wrong direction to pursue. This comment is frequently mentioned  by ranchers as a deterrent to wolves. But simply put the cow chases a wolf individualizing herself and as she’s chasing, another wolf locks on to the hind quarters, the wolf’s preferred target. The fight was the precursor for a sure depredation.

Another challenge is understanding what we are trying to achieve. In the case of our stock encountering an apex predator. We would prefer that we could removed the top rungs on the latter of fear. Which are the reactions of fight or flight. Both reactions are playing into the play book of what the predators require for Individualization.

As a response instead of flight or fight we are trying for the preferred reaction of the defensive posture of the herd group. This stance shall engage another reaction of fear, moving it from the cattle and transferring it to the predator. The standing solution engages the instinct of self preservation in the predators. An instinct that all animals have. It will simply tell the predator to move on to the next victim. It’s natures natural defense for herd animals. It is also nature’s deterrent to interrupt a predators actions.

As we described briefly in the beginning, the basic Stockmanship skills above such as creating movement can be done with pressure and release. What becomes difficult is the necessity to work outside of the corrals and the requirement to effectively create the release. The corrals establish a parameter that controls the release, keeping the cattle within confinement. In the open with no fences or parameters pressure is easily applied but without the release it is just flight, creating the chase.

The requirement is containing movement. By using dogs as pseudo predators that can stop the cattle, we secure several needs. First establishing a herd posture and as in over-desensitizing the young horse, we can remove movement and create the standing solution. Secondly we can ensure the release. By establishing the release we set to memory a response to pressure. Promoting the defensive posture of the herd group.

By establishing the defensive posture of the herd group we instill an effective stance that is a safe zone, a place of calm resolve that the cattle will seek under pressure.

The cattle soon establish a behavior that sets a response to pressure. During training, the cattle become aware of the dogs presence. This perception of pending pressure triggers the response of seeking the herd group. This action of seeking the herd group is actually the release (the desired response) that we have trained the cattle with. This reaction or response is just to presence. Eliminating the need for the predator to apply pressure to engage the response.

Our pseudo predators have a specific job and it is a completely different effort than a stock dog who’s effort is to assist a rancher in the movement of stock. The dog who’s Job it is to simulate a predator has a substantial list of requirements. 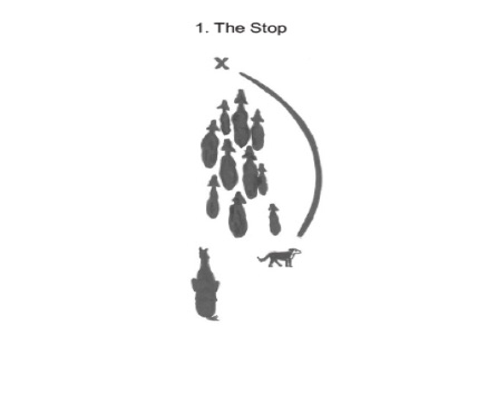 Another quality that I like is the ability of the predator awareness dog to “shed”. The ability to seek weakness in the herd group, which is a loosely arranged stance of the herd group. This looseness can be exploited by an apex predator. 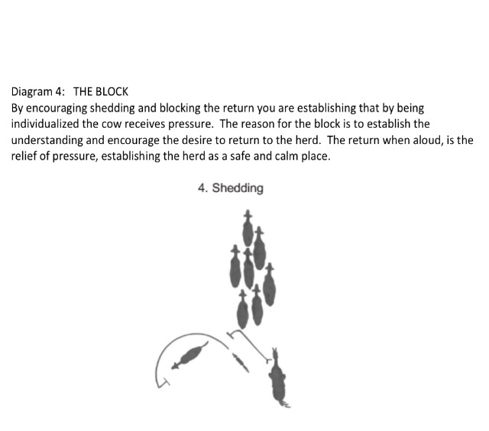 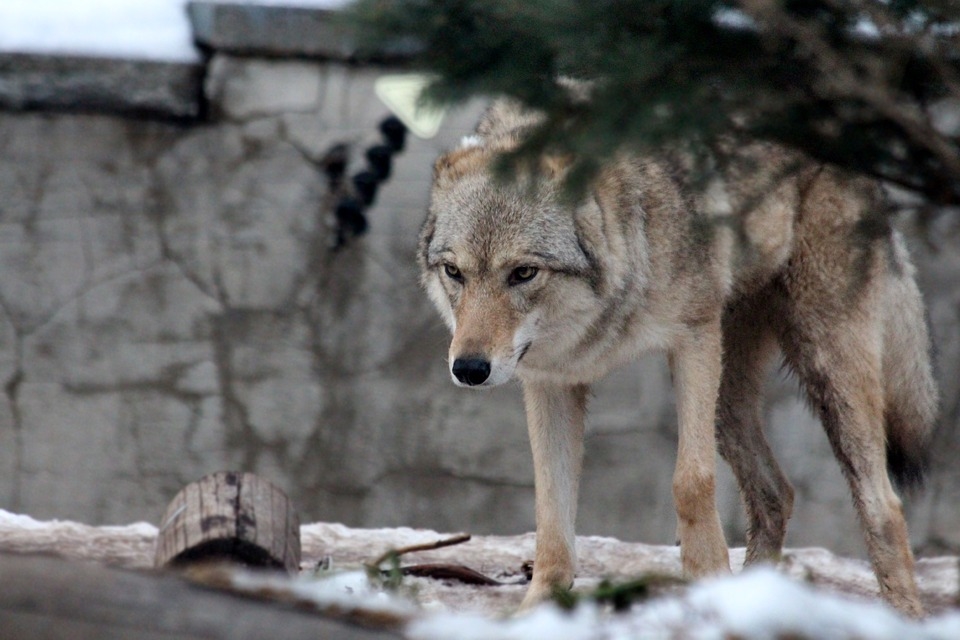 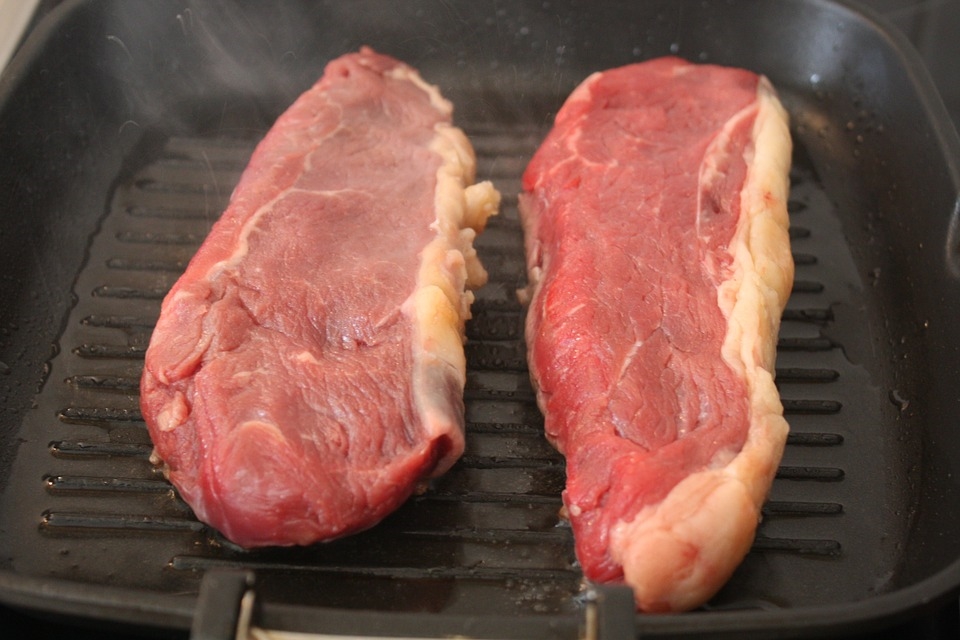