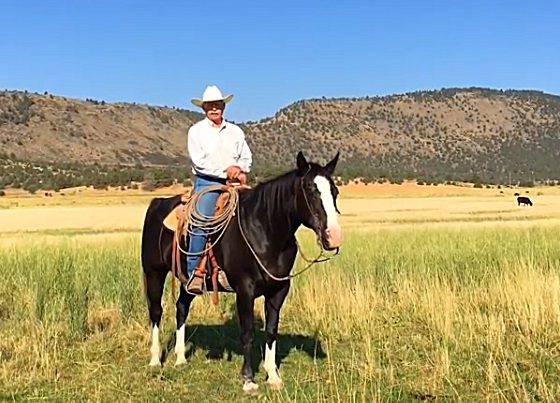 The training of the cattle is an easy installed response. Through our efforts on the ranch we put a lot of effort into separation, sorting, and processing of individuals. We don’t often consider the defensive posture of the herd group. But cattle are herd animals and herds exist because of predators. Creating the defensive posture of the herd is rather easy, you are just rekindling a basic instinct.

Mark L. Coats, a rancher from northern California, has had to adjust his herding practices to deal with the entry of wolves from Oregon into his range. In response to the challenges of running cows where wolves pose a constant threat to the animals, he has devised the ‘Rancher Predator Awareness’ program. The program is designed to enhance protective herding instincts in cattle when they encounter predators such as wolves, bears, and coyotes. Cow dogs are essential to the program, and Mark explained to Free Range Report how his program was inspired by an inexperienced pup:

In 2011 the now famous wolf OR7 entered into California at the location of my ranch. I was as uncertain of what was to follow as anyone. There was a lot of wolf meetings, hearings… But no one could tell me how do I survive this financially. I called other ranchers in other states that have been dealing with this issue. Their response was that they were still searching for solutions also.

One year I had taken in some cows to feed through the winter. They were a spoiled set of cows, unruly and had no handle of any kind. I also had a young dog that was much like those cows. I thought the cows and the dog would fit together very well. So along about mid winter we were feeding and the cows left the feed ground and grouped at the edge of the trees in a tight defensive posture. My first thought was my young dog had gotten out of the truck somehow. But it was a small group of coyotes leaving the Lower Klamath wildlife refuge and crossing the county road. The cows’ response was to group into a defensive posture. I realized at that point that this young dog, who wasn’t the best stock dog, had created this defensive posture of Predator Awareness.

In 2013, Mark became president of his local Cattleman’s Association, and two years later a cow was killed in what the California Department of Fish and Wildlife pronounced a ‘highly probable’ wolf kill. No sane rancher wants to have wolves existing side-by-side with cattle, but with wolf advocates and federal agencies nearly forcing the large predators into valuable western rangelands, Mark continued to develop his Predator Awareness program. According to Mark:

I had researched all of the possibilities of deterrents and had concluded that range riders were an effective response. So I called two environmental groups and began a range rider group that was later named the Working Circle. In this brief encounter I realized that the lack of local understanding and the goals of ranchers and the environmentalists were not the same. But the development of Predator Awareness continued.

The U.S. Fish and Wildlife Service learned about his program and gave Mark a grant to write a paper and produce a training tape for other ranchers desiring to try out the program. A basic knowledge of cows’ instinctive reactions to various kinds of ‘pressures’ are all that is required for ranchers to employ Mark’s program. Wolves and other predators must single out animals and separate them from the others in order to make effective kills, but even small herds can deter predators if their defensive responses are developed. Mark explained:

The training of the cattle is an easy installed response. Through our efforts on the ranch we put a lot of effort into separation, sorting, and processing of individuals. We don’t often consider the defensive posture of the herd group. But cattle are herd animals and herds exist because of predators. Creating the defensive posture of the herd is rather easy, you are just rekindling a basic instinct. There is a National Geographic video on U-Tube, of a baby buffalo deterring a wolf by not running and presenting a defensive stance until his mother arrives. If we replace fear with the response of grouping into the defensive posture of Predator Awareness, then the group becomes the safe-zone and as long as the Chase does not happen a small group can deter a conflict.

Although it’s a relatively new approach to staving off cow/wolf encounters, Mark’s Rancher Predator Awareness program seems to be working has already yielded benefits for him. He said, “I have not had a predator loss of any kind since I began. I have had cattle exposed to wolves. The only noticeable difference was the cattle were found grouped, but were calm and easily handled, while the neighbors cattle were highly agitated and flighty.”

As politicians and special interests continue to push wolf introduction programs throughout the west, the predators will continue to grow in number and territory. Mark feels confident that his program is a low-cost, effective wolf deterrent. You can find his paper (PDF] here. For videos, predator and cow cam footage, and additional information, please visit RancherPredatorAwareness.com.