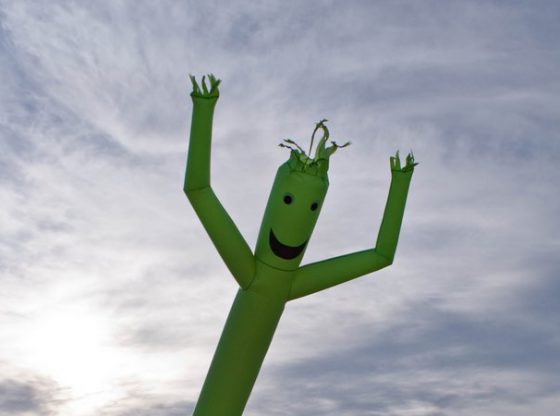 The strategy has been similarly effective for Birdseye at the Mill-Mar Ranch. Every evening around 8:30 or 9 p.m., he drives out to the pasture and fires up the gas generator that sets the tube man waving. He also shines a spotlight from the ground to give the tube man its eerie, alien-like glow.

His kids say it looks like a neon green alien dancing at night. His wife’s co-worker jokes about the ranch turning into a used car lot. But so far, Birdseye said he is sleeping soundly at night with the tube man standing guard against wolves that have repeatedly attacked his cattle.

Wolves from the nearby Rogue pack have killed or injured at least seven calves and one guard dog in the last year at the Mill-Mar Ranch in Jackson County, frustrating Birdseye and wildlife managers trying feverishly to keep the predators at bay.

Following the most recent confirmed depredation on Jan. 18, Birdseye received two inflatable tube men — one green, one yellow — on loan from the environmental group Defenders of Wildlife, which is assisting ranchers across the state with hazing wolves using non-lethal deterrents.

Wolves remain a federally protected species in Oregon west of highways 395, 78 and 95. Over the months, Birdseye has tried installing bright flashing lights and hanging fladry along fences at the 276-acre ranch. John Stephenson, Oregon wolf coordinator for the U.S. Fish and Wildlife Service, has even camped overnight to maintain a human presence in the pasture.

Still, the wolves eventually returned, jolting Birdseye out of bed whenever he heard the guard dogs bark at night.

“Most people don’t realize the amount of stress and anxiety,” Birdseye said. “You don’t go back to sleep.”

Suzanne Stone, senior Northwest representative for Defenders of Wildlife, said the group has been interested for years in using inflatable tube men — also known as air dancers — as a tool to prevent conflicts between wolves and livestock.

Stone said they set up an inflatable tube man for the first time last year at a farm near La Grande, Ore., where wolves had killed several of the landowner’s pet llamas. Since then, she said the landowner has had no more problems with wolves on the property.

“It’s always struck me as something wolves would be particularly skittish of,” Stone said of the 20-foot-tall, undulating tube man. “It’s unpredictable, and very foreign to them.”

The strategy has been similarly effective for Birdseye at the Mill-Mar Ranch. Every evening around 8:30 or 9 p.m., he drives out to the pasture and fires up the gas generator that sets the tube man waving. He also shines a spotlight from the ground to give the tube man its eerie, alien-like glow.

“If I was a wolf and saw something like that, I’d take off running in the other direction,” Birdseye said.