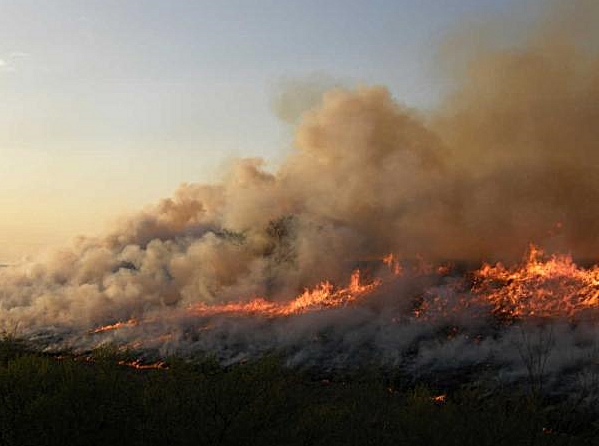 …one rancher even told him he ran out of ammunition shooting cattle injured in the fire. “They are shooting new baby calves, cows they worked their whole life to raise that kind of genetics and that type of cows. You can’t do anything, but you are there because you care about the cattle…”

Some students in Ashland are spending their spring break tearing out burned-up fences as their family and friends deal with the aftermath of the state’s largest wildfire.

It’s not known yet just how many miles of fence line will need to be replaced, but on the Gardiner Ranch, it could be at least 300.

That’s about the distance from Hutchinson to Topeka and back again.

A government program that helps cover such dire losses, however, only covers up to $200,000 in fencing costs, or about 20 miles.

“It costs about $10,000 a mile,” said Amanda Gardiner, whose husband, Garth, operates the ranch with his brothers. Their children, Greysen, a freshman, Gage, an eighth-grader, and Grace, a sixth-grader, along with their friends, are removing the charred fences this week.

Rebuilding fences is just part of what the ranchers affected by the Starbuck wildfire are dealing with. Some lost everything in the fire, which spread through southern Kansas counties on March 6. That includes cattle and homes whose residents are trying to figure out how to rebuild.

Estimates on cattle losses range from 3,000 to 9,000 head of adult cows. While the grass was scorched to the sandy earth, some ranchers lost their entire hay supply, as well.

Most didn’t have insurance on their cattle or fences, said Aaron Sawyers, the Comanche County Extension agent.

“Some guys have loans on cattle that are no longer alive,” Sawyers said. “The banks are going to be in a tight spot, and not just with two or three people – we’re talking the whole county.”

Moreover, a government program – the Livestock Indemnity Program – only pays up to $125,000 for cattle losses.

After talking to Clark County ranchers Monday, Sawyers wrote a letter to Trent Loos, a national cowboy radio personality who has his own radio show, “Loos Tales.”

The letter stated that Kansas ranchers are asking their congressmen for the same need – the reduction of governmental red tape.

“Tell your Congress men and women they need to raise the livestock and fence disaster programs limits,” Sawyers wrote. “These producers can’t wait a year for payment; this disaster money needs to be streamlined, NOW. Fences and livestock need replaced.”

“I wrote that from my heart after a day spent driving around around talking to grown men in their 60s” upset as they worked through the idea of how they were going to rebuild, Sawyers said Wednesday of the letter, which is now crossing the country thanks to Facebook.

Ranchers understand they most likely wouldn’t get full coverage on their losses, he said. But if they could get a percentage of the salvage value, it would be better.

For instance, the smaller rancher might get all his cows covered under the LIP program. It won’t come near to covering the losses of those losing several hundred head.

“One size fits all – that doesn’t work with this,” Sawyers said.

“I don’t think people realize the emotional issues,” he added, noting one rancher even told him he ran out of ammunition shooting cattle injured in the fire. “They are shooting new baby calves, cows they worked their whole life to raise that kind of genetics and that type of cows. You can’t do anything, but you are there because you care about the cattle.

“Out here, the cows eat before we do.”

On March 12, Sen. Jerry Moran slipped unannounced in to the United Methodist Church at Ashland. He planned to tour the damage later that day.

“In a real way, it was uplifting,” he said of the service. “It was focused on the disaster, focused on the challenges the community had. There was this sense of faith that we will get through this.”

“That is where I found the most initial comfort,” he said.

Afterward, he visited ranches with Kansas Adjutant General Lee Tafanelli. They visited Dave Bouziden’s ranch, where most of the 300 head of cattle are dead. Grandchildren are bottle-feeding what calves they have left.

He said they drove down the driveway where a house should have been.

“There was nothing but a stone chimney left,” Moran said.

He also toured the Giles Ranch.

Moran said one issue brought up was stringent fencing regulations and federal program caps, including LIP.

“Unfortunately, while $125,000 is a significant amount of money, that wouldn’t even be a drop in the bucket,” Moran said.

It would take an act of Congress to increase the limit or change the program, he said.

As lawmakers discuss the farm bill, this issue could come up. But funding agriculture has been a contentious topic, especially 2014 legislation. Some urban lawmakers were demanding that agricultural subsidy programs be pared down.

“It seems to me payment limitations shouldn’t apply in the circumstance of disaster,” said Moran, who was boarding a plane back to Washington Monday, planning to take the details of his visit back to his fellow congressional leaders.

He said he left the county seeing the resilience of ranchers and the community effort to rebuild.

“I came away from it more fully convinced about the value of small-town America and the pulling together of people in difficult times and the determination to make sure that good things come,” he said.

Getting through the red tape

Ranchers don’t get paid until all the fencing is in place. Moreover, they must meet the government’s fencing requirements, which on the rough, Red Hills landscape doesn’t involve a cookie-cutter scenario, Sawyers aid. The program also requires all new fencing – even if materials are sound.

“These ranchers are wanting to build a fence that will last 30 to 40 years,” said Sawyers. “Some of these fences were 50 to 60 years old already.”

He added that one rancher told him, “If we don’t get help, I’m done. I owe money on cows that are dead and I’m already extended on my loan.”

Matt Teagarden, president of the Kansas Livestock Association, said hopefully there could be more flexibility for government programs and the rules.

“That might’ve covered a couple hundred cows when it was in place, but with the more recent market prices, we’d want to take a look at that and see if there is a number that makes more sense,” Teagarden said.

Also, it isn’t clear whether a multi-family operation can collect for each family involved, or only once.

Whether the cap can be extended or not, Teagarden said the KLA’s foundation continues to raise funds that will be distributed to all Kansas ranchers affected by the fires to help with the rebuilding process.

In Ashland, Kendal Kay, president of the Stockgrowers State Bank in Ashland, is standing behind his customers.

The Stockgrowers bank has been supporting cattle ranchers since it first opened in 1885. There have been challenges over the years, and the wildfire might be the biggest one to overcome. But as a community bank, he is backing his customers in good times and bad.

Ranching, after all, is the backbone of this community, he said.

He hasn’t given up amending the caps and the government regulations on building fences. There needs to be some leniency – removal of roadblocks, Kay said. Ranchers can’t wait any longer; they need to rebuild.

“They aren’t looking for a handout,” Kay said. “They just need a little help.

Amanda Gardiner said ranchers losing fencing and cattle have lost their revenue stream for the next three years.

“Those cattle are our salary,” she said. “We don’t have any other revenue streams coming in. There is nowhere else the money is coming from.”

She’s helping the Ashland Community Foundation in its fundraising effort; everyone is lending a hand, she said.

Some are coming in from all across the country. College kids on spring break from the University of Iowa drove to their ranch just to help with the fencing effort.

“They didn’t know a soul and just showed up,” she said, adding they stayed for a couple of days until one, who plays football, had to get back for practice. “They just wanted to come help.”

How to help ranchers affected by the wildfires

There are many ways to help Clark County, along with all affected by the Kansas fires.

Those wishing to make inkind donations or to volunteer in cleanup and rebuilding efforts are advised to contact the head of the respective group prior to donating.

Those wanting to donate to the wildfires can visit www.ClarkCountyProud.com to see what the needs are and where to donate.

The Kansas Livestock Association is accepting donations of feed, fencing supplies and cash for all ranchers who’ve lost fencing, forage resources, harvested feed and an undetermined number of cattle in the blazes across Kansas. To donate, visit www.kla.org/donationform.aspx