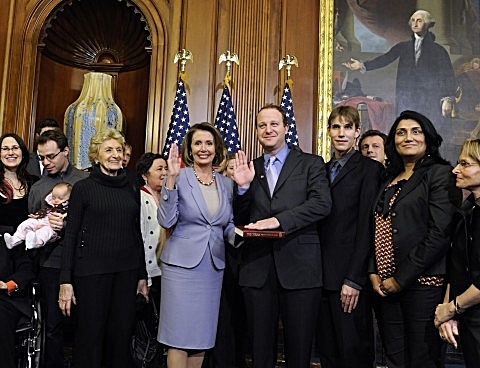 Thirty years, in historical terms, is a short period of time in which to completely transform America’s economy, infrastructure, travel patterns, lifestyles, technological sectors, and systems of innovation and progress. And such a transformation–given that, as of today, ‘renewable’ forms of energy account for less than 4 percent of available electricity in the grid–would probably look more like an apocalypse than a green revolution.

Colorado Democrat congressman and gubernatorial hopeful, Jared Polis, is the primary sponsor on a house bill that would completely phase-out all domestic fossil fuel production and consumption by 2050. Polis has tentatively named it “Clean and Renewable Energy for All Act,” and the bill sets a blanket goal that would force the country to go ‘100 percent’ renewable in roughly three decades from now. Congressmen Grijalva of Arizona, Huffman of California and Jayapal of Washington state have joined Polis as co-sponsors of the anti fossil fuel legislation.

Thirty years, in historical terms, is a short period of time in which to completely transform America’s economy, infrastructure, travel patterns, lifestyles, technological sectors, and systems of innovation and progress. And such a transformation–given that, as of today, ‘renewable’ solar and wind energy production accounts for less than 4 percent of available electricity in the grid–would probably look more like an apocalypse than a green revolution. But more importantly, and more immediately, the Polis bill is less about energy transformation than it is about giving billions to pet special interests. The bill provides multi-billion dollar subsidies and grants to green energy corporations and public transportation projects, hands out $100 million grants for ‘decarbonization’ programs, creates energy welfare entitlements for millions of families who would be thrust into poverty without access to cheap and abundant fossil fuel energy, and gives cash allowances to countless out-of-work energy industry employees–which says a lot about the projected economic impact of the bill. And, as this bill picks only urban progressive ‘green’ winners, it would make rural, resource-rich districts across the country the losers with its new regulations designed to kill domestic fossil fuel development.

Not only does the Polis bill lay out the draconian ‘hows’ of transforming our fossil fuel-based civilization into a green Utopia, but it clearly lays out the ‘why;’ global warming. Polis includes this language in the bill’s Statement of Policy:

(a) FINDINGS.—Congress finds that from 1880 through 2015, global temperatures have increased by about 1.06 degrees Celsius; the vast majority of global warming that has occurred over the 50-year period ending on the date of enactment of this Act was due to human activities, primarily the burning of fossil fuels; emissions of greenhouse gases and atmospheric concentrations of greenhouse gases continue to rise, which results in a continued warming trend; global warming already has a significant impact on the economy, including the farming, fishing, forestry, and recreation industries; the significant impacts of global warming that are already occurring will be amplified by global temperature increases, resulting in increased droughts, rising seas, mass extinctions, heat waves, desertification, wildfires, acidifying oceans, significant economic disruption, and security threats; low-income communities, communities of color, indigenous communities and other environmental justice communities in the United States are inordinately exposed to pollution from fossil fuels, and climate impacts will be disproportionately felt by those communities; the world is facing a climate emergency; people in States and local communities across the United States are engaging in and winning the fight to mobilize to solve the climate crisis; and the Federal Government has thus far failed to adequately address the climate crisis.

This section reads more like a social justice manifesto than it does a scientifically-based justification for extreme action. A native of Boulder and founder of ProFlowers, with a personal worth of nearly $400 million, Polis loves to spend other peoples’ money. Despite the lack of concrete science supporting its assertions, there are hard-money implications in the Polis bill that would bankrupt American taxpayers as well as the domestic fossil fuel economy. It’s outlays include:

$10 billion per year for ‘weatherization assistance’

$2 billion per year to improve energy efficiency in existing housing

$400 million per year, administered thorough the Department of Education to fund technical training for, ‘economically-disadvantaged’ and ‘low-performing’ students

$1,250 handout for each displaced energy industry employee who must find another job

$24,000 per year for displaced workers suffering from long-term unemployment

$10 million per year for economic development planning in affected counties

$7 billion per year for as needed broadband, water and electrical infrastructure

$10 billion per year for enhancing the electrical grid

$250 million per year for grants to zero emission vehicle programs

Grants up to $20 million for zero emission programs, corporations

Grants up to $50 million for ‘decarbonizing America’s highways’

Grants up to $100 million for tribal, private corporations, etc. participating in ‘decarbonization’ programs

Grants up to $20 million for alternative fuel programs

Grants up to $100 million for energy efficiency programs

$10 million in the first year to promote Climate Bonds

$1 billion per year for administration of the grant program

$10 million for each year thereafter

Within the bill are also stipulations which punish domestic energy developers, including a $75 million ‘liability’ to be paid by Offshore Drillers and Pipeline Operators. And, it includes a carbon tariff on ‘carbon-intensive’ products that enter the U.S.

Even though the fiscal implications of the Polis bill are mind-boggling, there is no cost analysis of the economic impact of shuttering thousands of American companies, or ending fossil fuel exports. This legislation would land a backbreaking blow, crushing thousands of resource-based communities from Maine to California, to Texas to Alaska. And millions of Americans, whose livelihoods and quality of living are directly and indirectly linked to domestic energy, would literally be left out in the cold. The cost of Polis’ radical legislation is incalculable, and ultimately cataclysmic to our 21st Century society.

Fortunately, the chances of this legislation passing through Congress and receiving a presidential signature are less than slim. It’s likely that Polis, who is currently touring Colorado to gin up support for his 2018 gubernatorial run, is just throwing a morsel of appeasement to his radical, anti-fracking, pro-green subsidies progressive urban base. Ridiculous provisions such as a “National zero vehicle emissions standard,” show that this is not serious legislation, but rather Polis’ moral ‘greenstanding.’ Since the Polis bill has not yet been given a final title, Free Range Report would like to offer up something apropos, such as the “Make America Dark, Cold, and Impoverished by 2050 Act.”