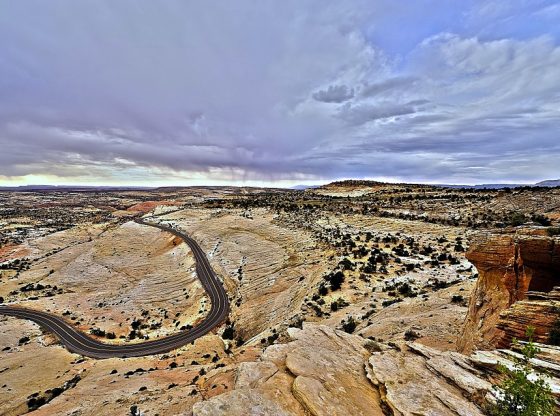 The facts surrounding Shelby’s recusal show that Southern Utah Wilderness Alliance clearly lied about not having ‘a legal interest in the case,’ but it’s the emails between SUWA’s Liz Thomas and the BLM director, Juan Palma, that unequivocally reveal the group had a deep interest in the Recapture Canyon legal case, and colluded with federal officials to further the prosecutions of Wells and Lyman.

During his May swing through Utah to review national monuments, Interior Secretary Ryan Zinke had private meetings with three county commissions whose counties host two of the most controversial monuments under scrutiny — Bears Ears and Grand Staircase-Escalante.

Now the Southern Utah Wilderness Alliance has sued, alleging Kane and Garfield commissions’ May 10 meetings were illegal because they were not posted as required under Utah’s Open and Public Meetings Act.

But the plaintiffs named in the lawsuit countered. According to the Tribune:

Garfield County Commission Chairman Leland Pollock dismissed the allegation as “frivolous.”“I know it is. We didn’t violate it,” Pollock said. “We didn’t do anything wrong, so I’m not worried.

He declined to discuss the meetings further, citing advice from counsel. His Kane counterpart Dirk Clayson also rejected the suit’s contentions.“We understand the open meeting obligations the county has and deny any wrongdoing under the act,” Clayson said. “There are a whole bunch of reasons we won’t go into it. We think it unfortunate that SUWA has filed another lawsuit rather than engage in meaningful dialogue.”

The SUWA lawsuit is related to Secretary Zinke’s ‘monuments review,’ as ordered by President Trump, and the possible reduction in size of the massive Grand Staircase-Escalante National Monument in southern central Utah. Grand Staircase-Escalante was created by Clinton via the Antiquities Act in 1996 and has had a profoundly negative economic impact on small towns in the region.

But SUWA also appears to be lobbing legal threats at commissioners in San Juan County, the location of the Bears Ears National Monument which was created by Obama on December 28, 2016, just days before he left office. Despite overwhelming local opposition to the monument, SUWA, other environmentalist groups and giant outdoor recreation corporations have spent millions on PR trying to convince Secretary Zinke to leave it the way Obama intended.

Ironically, SUWA was involved in formulating the plan for Bears Ears through collusion with Obama’s Interior Secretary, Sally Jewell. Environmentalist author, Terry Tempest Williams, published a letter which had been excerpted from a recent book, detailing a meeting in which representatives from several green groups penned a plea to Jewell, asking her to push through their proposed monument designation for the Bears Ears. SUWA director, Scott Groene, was present at the meeting, which was virtually unknown to the public until Williams’ published excerpt surfaced. The letter details a 2014 dinner party held at her place:

A few weeks later, the Saturday after Thanksgiving to be exact, Brooke and I had a dinner party for twelve. Jonah Yellowman sat at the head of the table. To his right was Scott Groene from the Southern Utah Wilderness Alliance, to his left was Bill Hedden from the Grand Canyon Trust.

The rest of the table looked like this: Gavin Noyes from Dine Bikeyah was seated next to Scott Groene. Next to Gavin was Walt Dabney, former superintendent of Canyonlands National Park, with his wife and daughter. I sat at the other end of the table facing Jonah, with Walt on my left and Josh Ewing from Friends of Cedar Mesa to my right, Eleanor Bliss, our neighbor who also works for the Grand Canon Trust, sat next to Josh. Sue Bellagamba from the Nature Conservancy and advocate for the Dugout Ranch sat next to Eleanor. Brooke Williams sat between Bill Hedden and Sue.

A portion of the conversation between the various schemers is quoted in the December 2014 letter from Williams to Jewell:

After dinner, maps were laid out on the living room table. Four maps became close to one map. What we quickly recognized was that we all wanted the same thing and that the boundaries we had drawn separately were closer together than anyone knew once we gathered around one common table of concern.”

Scott Groene from the Southern Utah Wilderness Alliance asked Jonah how he felt about the north boundary being extended up through Canyonlands. “The more land the better”, Jonah said. “We are with you.”

Many of the usual suspects present at the dinner party were also behind a massive pro-monument propaganda campaign, designed to give the impression that Bears Ears was supported by the vast majority of Utahans and 100 percent of the Native American tribes in the region. Neither of which were true, by the way.

SUWA participated directly in a meeting with then Interior Secretary Jewell and other ‘supporters’ of the Bears Ears in Bluff, Utah in the summer of 2016. Interestingly, hundreds of those attending the ‘pro’ meeting were bussed in from outside of Utah, with the help of the Wilderness Society.

Despite the fact that Southern Utah Wilderness Alliance is a non-governmental organization (NGO), they’ve gained a reputation for underhanded, and sometimes secretive dealings, including colluding with federal bureaucrats against citizens. In 2016, Monte Wells, a blogger from Monticello, Utah who runs The Petroglyph News, recounted a complex history of collusion between SUWA and officials and the Bureau of Land Management (BLM). Together, SUWA, BLM and other environmentalist NGO’s launched an effort to nail Wells himself and county commissioner Phil Lyman on federal charges related to an organized ATV ride in Recapture Canyon. The Petroglyph uses screenshots of emails between SUWA and BLM to illustrate the collusion. It reports:

Starting as far back as 2010 , Liz Thomas, SUWA’s Field Attorney, demonstrated her intent to discredit Monte Wells, a Monticello City Councilman, in an email to Steve Boos, the Legal Counsel for the Navajo Nation and others. Monte Wells is the owner of and reporter for The Petroglyph News, a Monticello -based news blog, and was charged along with Commissioner Phil Lyman, and others, in the Recapture Canyon case.

Wells had been an outspoken opponent of SUWA. But in 2011 he spoke out specifically against a statement Liz Thomas had made during a San Juan County (SJCO) Commission meeting. The comments by Wells apparently offended Liz Thomas, and it seems she has held a personal vendetta against Mr. Wells, as the following email illustrates:

And, Liz Thomas directed the BLM to purported evidence of ‘wrongdoing.’

Perhaps SUWA’s hypocrisy is best illustrated by a situation which lead to the recusal of a federal judge.  Wells and Lyman were eventually handed several charges including ‘conspiracy’ and ‘trespass’ for their roles in the Recapture Canyon ATV ride. Judge Robert Shelby was appointed to preside over the Recapture Canyon trial in federal court in Salt Lake City. Only after the case had been heard, and pending the sentencing of Phil Lyman, was Shelby pressured to recuse due to his friendship with SUWA’s legal director, Steven Bloch. It was a letter written to the court  by several environmentalist groups, including SUWA, that forced Shelby to recuse, and exposed the significant, and compromising relationship between Shelby and Bloch. The Salt Lake Tribune reported in 2015:

Though neither SUWA nor Bloch have a legal interest in the case, Lyman pointed out in his motion that SUWA urged prosecution against him in the first place and that Bloch attended the trial. Lyman added that SUWA joined other conservation groups in writing a letter to the court advocating for “punishment [that] reflects the egregiousness of [Lyman’s] crimes.”

The letter in question was sent to the probation officer responsible for making a sentencing recommendation, according to Bill Hedden, executive director for Grand Canyon Trust, which joined the letter.

It appears that letter helped sway Shelby to recuse himself, according to his decision. The recusal “will promote confidence in these proceedings and avoid even the appearance of impropriety in connection with the court’s sentencing duties,” his decision reads.

The facts surrounding Shelby’s recusal show that SUWA clearly lied about not having ‘a legal interest in the case,’ but it’s the emails between SUWA’s Liz Thomas and the BLM director, Juan Palma, that unequivocally reveal the group had a deep interest in the Recapture Canyon legal case, and colluded with federal officials to further the prosecutions of Wells and Lyman.

Southern Utah Wilderness Alliance, not unlike other extreme green NGOs, is in the Sue & Settle business. Their focus is less on environmental stewardship than it is on halting governmental and private activities which they oppose through a constant stream of lawsuits and injunctions. And the bad blood between SUWA and counties in southern Utah goes beyond meetings with Ryan Zinke, or Grand Staircase-Escalante. These entities have been wrangling in the courts for over a decade.

Prior to Trump’s appointment of Ryan Zinke as Interior Secretary, SUWA and its cohorts had a good thing going with Sally Jewell, and before her, Ken Salazar. Colluding with federal power players to get what they wanted, whether a certain policy, or the conviction of a citizen whom they didn’t like, was business as usual before Zinke entered the stage. But things have changed, and it could be that SUWA and other extreme groups aren’t quite sure how to react to an administration that is little friendlier to local governments and citizens that their predecessors. At this point it appears their only answer SUWA can come up with for its loss of clout, is to sue.