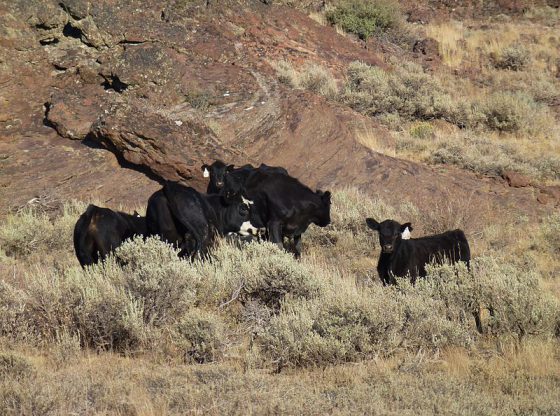 “The problem is the science they used to build this goddamn document,” said Loren Stout, a rancher in the area…Though ranchers aren’t responsible for the problem, grazing cattle nonetheless get the blame, he said.

Though the U.S. Forest Service didn’t say so outright, Matt McElligott and other ranchers who graze cattle in Oregon’s Malheur National Forest believed they’d been given an ultimatum.

Either bow to the agency’s demands, or lose their grazing rights and suffer financially.

The timing seemed to send a message, McElligott said. The ranchers were given less than a week to comment on the 335-page biological opinion that would govern grazing in the national forest for the next four years.

In the days he had to read the document, McElligott said he found reasons to be alarmed that grazing restrictions would increase, but his back was against the wall.

The Forest Service released the document for ranchers to review in late May, when some would ordinarily have already turned out cattle onto forest grazing allotments. But unless the biological opinion for the Mid-Columbia steelhead — a fish population protected under the Endangered Species Act — was finalized, there could be no grazing.

“If I’d objected, they’d just have put the brakes on it. Nobody would have gone out to graze,” McElligott said.

“If you guys want to turn out,” he inferred, “you just have to accept this.”

Seven months later, having endured one grazing season under the biological opinion, McElligott isn’t optimistic about next year.

Because the Forest Service determined that some ranchers were out of compliance with the plan in 2018, certain repeat violations on those same grazing allotments in 2019 could trigger the need for yet another biological opinion — and with it, further restrictions on the number of cattle that can be turned out and where they can graze.

Ranchers turn out more than 24,000 cow-calf pairs a year between June and mid-October on 111 allotments in the 1.7 million-acre national forest, about 90 percent of which is grazed. The Forest Services estimates grazing generates roughly $200,000 in fees for the federal government and approximately $7.7 million in labor income, which is farm revenues after expenses.

Dissatisfaction with the current biological opinion, which governs grazing from 2018 until 2022, already runs deep among ranchers in the area, with some considering a lawsuit against the federal government over the document’s scientific validity, McElligott said.

“We’ve had issues with the Forest Service before, but nothing like this,” he said.

McElligott and others say they hoped the Trump administration, with its emphasis on deregulation, would be more “reasonable” regarding grazing policy. Two years in, however, they say there’s little evidence of that in the biological opinion.

“This administration is not doing as much as many of us thought it would on the national forests and grazing,” he said. “Driving change through the embedded bureaucracy is very difficult.”

Walden noted the biological opinion is based on a lot of work that occurred before President Trump came into office, setting a foundation that’s tough to budge.

“Some of this has been going on for decades and there’s a lot of momentum behind it,” he said.

If the political route is slow-moving, the legal route isn’t necessarily any faster.

Lawsuits over grazing in the Malheur National Forest are nothing new. Complaints have been filed over the years by environmentalists who claim the government’s biological opinions insufficiently protected the threatened fish species. One case over bull trout was finally thrown out this year after 15 years of litigation, but the decision is now under appeal.

The potential for court battles highlights the complexity federal agencies face when analyzing the effects of grazing on riparian habitats.

Those plans are then submitted to the National Marine Fisheries Service, which issues a biological opinion determining whether the species or their habitat will be jeopardized by the proposed activity.

The steelhead population within the tributaries of the John Day River is estimated at roughly 4,500 to 20,000 fish, depending on the year, according to the Forest Service.

In the past, when the agency found the grazing plans were “not likely to jeopardize” steelhead as long as restrictions were followed, environmental activists claimed they were arbitrarily lenient.

“The problem is the science they used to build this goddamn document,” said Loren Stout, a rancher in the area.

For example, federal agencies have developed their environmental data about steelhead populations by studying areas where fish are unlikely to travel, such as upstream of multiple “check dams” installed by the Forest Service to slow water flow, Stout said.

Though ranchers aren’t responsible for the problem, grazing cattle nonetheless get the blame, he said.

“If you go against their agenda, you’re demonized,” he said.

OUR ONLY SPECIAL INTEREST IS FREEDOM