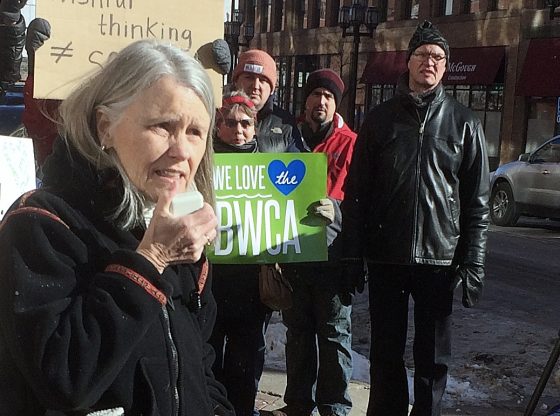 “The record is clear and persuasive, as understood by the Minneapolis Star Tribune, that Becky Rom, collaborating with outgoing Obama Agency officials, led a high profile lobbying campaign to convince them to reject Twin Metals’ application to renew two leases near the BWCAW, and further, to withdraw 234,000 acres of federally owned land from mineral development in the Superior National Forest.”

Some sections of the letter have been omitted for efficacy. The letter in its entirety can be viewed here

In January 2017 the U. S. Forest Service announced that they would conduct a two year study and prepare an Environmental Impact Statement (EIS), documenting the information and analysis necessary to support a decision on the imposition of a 20-year moratorium on mineral development in the Superior National Forest (SNF); and further, to support an amendment to the Superior National Forest Land and Resource Management Plan. (82 Fed. Reg. 4282, 4284).

We wrote to you in October 2017 to express our opposition to the withdrawal of 234,000 acres of National Forest lands in the in Northeastern Minnesota.  Our October 17, 2017 letter asserts that “The decision by the U.S. Forest Service/BLM and the Obama administration to conduct a study and prepare an EIS is a tactic employed to not only delay, but pre-emptively quash the development of Twin Metals Minnesota’s project and will replicate the EIS completed by the USFS in May 2012”.   (Up North Jobs Inc. October 17, 2017 letter to Secretary Ryan Zinke and Secretary Sonny Perdue, p. 8)

Thank you Secretary Perdue, for your November 17 letter advising us that,

“[T]he Agency is currently evaluating all proposed and pending withdrawals to ensure that these actions are consistent with our National priorities”;

“[T]hat the [Department] will assess the feedback developed through the public comment period”; and that

[T]he USFS is currently “working on the environmental analysis of the proposed withdrawal under the requirements of the National Environmental Policy Act.”

We offer additional factual information to support our claim that the new study and the preparation of yet another EIS, will only replicate the EIS completed by the USFS in May 2012 under the Obama Administration. (Final Environmental Impact Statement/Federal Hardrock Mineral Prospecting Permits, Superior National Forest, May 2012).

In 2006 a moratorium was imposed by the U. S. Forest Service banning mineral exploration in the Superior National Forest until such time as an Environmental Impact Study was completed.  The moratorium was not lifted until September, 2012.

In November 2006 mining Industry representatives were asked to attend a meeting in Duluth, MN by James Sanders, then District Forest Supervisor, in the offices of the U.S. Forest Service in regard to applications by several mining companies to be issued Federal Hardrock Mineral Prospecting Permits to prospect for copper, nickel, platinum and related minerals in the Superior National Forest.  The meeting was attended by

representatives of several mining companies, including the undersigned co-author, David C. Oliver, who at that time was the Project Manager and Senior Staff Geologist for Duluth Metals.

Mr. Sanders told those assembled that he had been contacted by the Minnesota Center for Environmental Advocacy, an anti-mining environmental organization, who told him that if the USFS moved forward supporting the issuance of prospecting permits without completing an EIS, they intended to file a lawsuit.  Mr. Sanders told the mining industry representatives that he did not have the personnel nor the funds available to complete an EIS.

Following the Duluth meeting in November 2006, no prospecting permits were issued. Exploration of mineral lands was prohibited and the Notice of Intent to complete an EIS was not published in the Federal Register until December 19, 2008. The Final EIS was not completed and published by the USFS until May, 2012.

In September 2012, almost six years after the prospecting permits were first denied and the moratorium was imposed, the BLM finally issued a Record of Decision (ROD) and proceeded to grant 28 prospecting permits to DMC Corporation, Twin Metals Minnesota LLC and others.

The time, effort and funds that were expended to complete the Programmatic EIS is staggering.  A scoping package was sent to agencies, Tribes, affiliations, 60 organizations, 120 individuals, and federal, state and local government agencies on April 1, 2009.  The USFS received 1736 comments regarding the potential social impacts on local landowners, summer home visitors, Boundary Waters Canoe Area Wilderness visitors and winter use enthusiasts.  Other comments focused on potential impacts to the land, water resources, Tribal rights, social and economic impacts, vegetation, soils, wildlife and access. Several public comment meetings were held. The comments submitted express concerns regarding pollution, the processes used in exploration activities and the potential for future mineral development. Additional comments focused on the administrative side of permitting, such as the adequacy of the analysis, the scope of the project, the appropriateness of current environmental laws and regulations and the Forest Plan policies. Friends of the Boundary Waters, Friends of the Boundary Waters Canoe Area, the Minnesota Center for Environmental Advocacy, the Sierra Club, and the Northeastern Minnesotans for Wilderness were all involved in the initial public scoping efforts.

On February 17, 2014, at a time when the ink was hardly dry on the aforementioned documents, Becky Rom, an attorney and anti-mining advocate who chairs the Ely based Campaign to Save the Boundary Waters, emailed Claudia Walker at the Interior Department, (cc’s to Linda Lance and James Lyons) advising them that,

“We have a meeting scheduled with Director Neil Kornze, Deputy Director Linda Lance and Jim Lyons of the Interior Department.  .  .  on Thursday, February 27th.”

On September 8, 2014, Becky Rom emailed the office of Janice Schneider, then Assistant Secretary for Land & Minerals Management, U.S. Department of the Interior, writing:

“As you know, many of us in Minnesota are encouraging the BLM and Interior Department, as well as the US Forest Service and US Department of Agriculture, to study and carefully consider the full range of negative impacts that would result from sulfide-ore mining (copper, nickel, platinum, and palladium) now being proposed for the Superior National Forest in Minnesota . . .  “.  “We would like to request a meeting with Assistant Secretary Janice Schneider”.

“In addition, we would like to discuss proposed extensions of two federal leases held by Twin Metals. Our attorneys from Jenner & Block will attend the meeting with me.”

“We believe that it would be helpful for the Assistant Secretary to hear from the members of the public about concerns of the Twin Metals mine proposal. . .    “.

Mining opponent advocates have the right to meet with government officials urging them to take or refrain from taking a particular action.  But for Ms. Rom to urge that the USFS/BLM conduct an environmental review of sulfide-ore mining in the watershed of the BWCAW when the only request made by Twin Metals Minnesota and several other mining companies was to be issued exploratory permits – not permits to conduct mining operations – is intentionally misleading. And especially misleading was Ms. Rom’s statement that Twin Metals is proposing a mining operation.  As Ms. Rom was aware, Twin Metals application for the permits that were granted in 2012 were issued for mineral prospecting activities and not in regard to a proposed mining plan operation.

In April 2015, Minnesota Fourth District Congresswoman Betty McCollum introduced a bill to ban mining on all federals lands within the Rainy River Watershed in the Superior National Forest.

In March 2016, Interior Department Solicitor Hilary C. Tomkins wrote Bureau of Land Management (BLM) State Director Ms. Mouritsen, advising the Director that the BLM can deny renewal of Twin Metal’s mineral leases, and in December 2016, it notified Twin Metals Minnesota that it would not renew its leases.

In September 2017 and again in October 2017 Up North Jobs wrote saying:

“The decision by the Obama administration and the USFS/BLM  to conduct a study and complete an environmental impact statement “documenting the information and analysis necessary to support a decision on withdrawal, and to support an amendment to the Superior National Forest Land and Resource Management Plan”, is a shameless attempt by the anti-mining activists and their federal agency “friends” to pre-emptively quash the development of Twin Metals Minnesota’s proposed project by delaying exploration until at least 2019, and perhaps for an additional 20 years if a moratorium on prospecting is imposed.“

On December 22, 2017, Department of Interior Principal Deputy Solicitor, Daniel H. Jorjani, issued a 19 page Opinion, reversing President Obama’s earlier opinion that the two leases granted Twin Metals by the United States, granted them a non-discretionary right to a third renewal term, and therefore, the Bureau of Land Management did not have the discretion to deny Twin Metals’ lease renewal application in December 2016.

“A year ago, the state’s environmental advocates were hailing a major victory in their efforts to derail a risky new type of mining in Minnesota – copper and nickel extraction, which can discharge polluted water long after mining ends. A high profile lobbying campaign led by Ely’s politically connected Becky Rom helped convince outgoing Obama officials to reject a Chilean-owned mining company’s routine request to renew two leases on federally owned land near the BWCA.”  “The victory for environmentalists set an alarming precedent, injecting political advocacy at another point in the oversight process”

The record is clear and persuasive, as understood by the Minneapolis Star Tribune, that Becky Rom, collaborating with outgoing Obama Agency officials, led a high profile lobbying campaign to convince them to reject Twin Metals’ application to renew two leases near the BWCAW, and further, to withdraw 234,000 acres of federally owned land from mineral development in the Superior National Forest.

If the Withdrawal is not rescinded it will stifle job creation, decimate local economies and irreparably harm K-12 education in Minnesota. For the reasons set forth herein, we urge and respectfully request that the moratorium imposed on mineral development on the 234,000 acres of federal lands in the Superior National Forest be rescinded without further delay and that the EIS study now being conducted, be terminated.