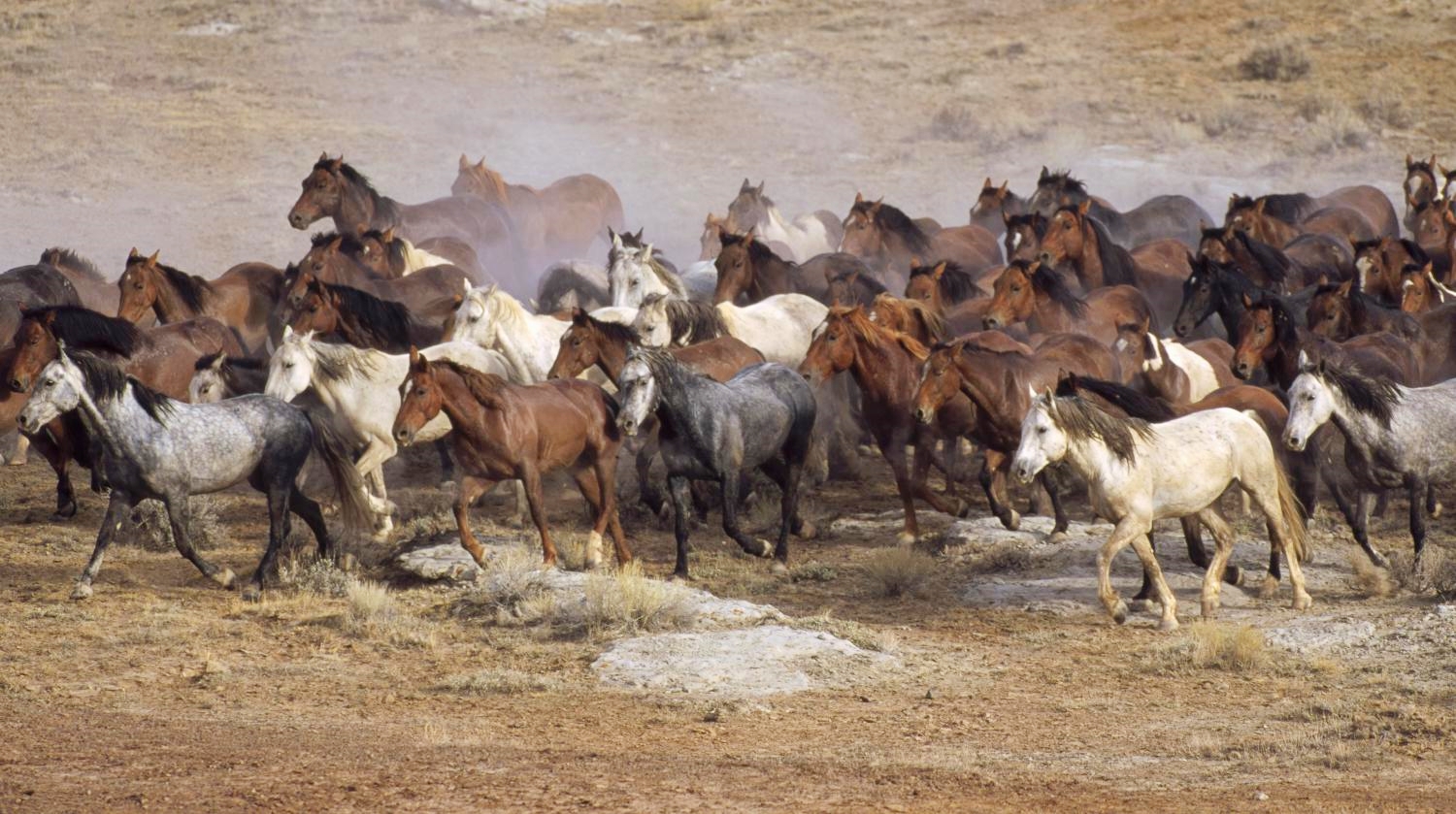 “(Horses) deemed unadoptable are the adults, because feral horses, unlike our pets, are for the most part unsafe to handle. There is nowhere else for them to go, which relegates them to a lifetime of captivity in open pens, exposed to the elements, at a taxpayer expense of at least $75 million per year and multiplying.”

There Are Solutions to the Mustang Overcrowding Problem, but Activists Don’t Have Any

September 9, 2016, The National Wild Horse and Burro advisory Board, an independent panel, recommended to the Bureau of Land Management, that the BLM “euthanize or sell without limitation” the 45,000 unadoptable mustangs currently kept in BLM pens. This leaves 70,000 horses also under the jurisdiction of the BLM, free roaming as part of the western American landscape.

Deferring to the government or tax exempt organizations to protect mustangs will never solve the overpopulation problem.The captive horses are those that have been removed from western range lands due to overpopulation. Otherwise they would suffer an agonizing death by starvation and dehydration while grappling with the limited resources of the land.

In an overpopulated state, these horses are not only harmful to themselves, but destroy the chances of survival of every last plant and animal impacted by their desperate effort to outlive stingy Mother Nature’s limitations.

Those deemed unadoptable are the adults, because feral horses, unlike our pets, are for the most part unsafe to handle. There is nowhere else for them to go, which relegates them to a lifetime of captivity in open pens, exposed to the elements, at a taxpayer expense of at least $75 million per year and multiplying.

The buzz about the announcement burned like a federal lands preservation area forest fire throughout social media – with the skewed slant that the BLM themselves had already announced an intent to euthanize 45,000 horses. Despite the September 12, 2016 response from the BLM that the “BLM does not and will not euthanize healthy animals”, the hysterical outreach from random petitioners was still finding its way into my email on September 16.

A petition by American Wild Horse Preservation Campaign stated that, “The agency wants to clear the holding pens so that it can round up 40,000 more wild horses and burros from their homes on the range.”

Free roaming mustangs are currently living and dying like vermin. The majority are not thriving like the majestic and ethereal creatures artistically portrayed by wild horse fanciers.

Mascots for Every Fancy

In the days prior to the birth of the United States, Spanish settlers brought ranch horsesto the new world. Beginning with the Spanish conquistadors, horses began to slip away. Some ran, others were stolen by Native Americans. Yet more were released into wilderness herds as part of ranching and cavalry remount programs to breed and to be rounded up as needed for farm work, as well as for use in the Civil War and World War I.

Over the past 500 years this trend of abandonment repeated itself. Economic down trends, like the housing crisis of 2008, add countless horses to intermix within feral herds. While mustang lines are now being preserved by private breeding endeavors, the Spanish blood from Iberian stock is almost completely diluted out of the free roaming herds. The American mustang is not the Spanish Mustang. Texas A&M genetics lab cannot use American mustangs in their reference panel for genetic testing.

“Mustangs are also not on the breed list as it is now primarily a feral horse found in the Western United States and managed by Bureau of Land Management (BLM). Originally mustangs were Spanish horses or their descendants, however throughout the years they had influence from many different horse breeds. There are several mustang registries, but overall there is just too much complexity to consider them in breed ancestry analysis.”

Notwithstanding what wild horse preservationists would like us to believe about the breed lineage of American mustangs in a bid to romance the public out of donations, free roaming equines of the American West are living creatures that deserve good stewardship. They are icons of our pioneering American spirit. They are beautiful and hardy animals whose history is undoubtedly knotted into the fiber of our land.

Animal Activists: Out of Touch with Animal Welfare

Professional activists are not held accountable for the results of their actions. Sadly, these horses represent an economic boon for 501(c)(3) organizations who often sue the BLM to prevent management of booming population of feral horses. This is at the expense horse and ecosystem well-being.

A noteworthy myth perpetuated by horse activists (like the lie that was recently emailed to me via a petition) to drum up outrage and monetary support, is that the public lands ranchers are using up the rangeland for cows to the detriment of horses.

In fact the horses in some areas are over the optimal numbers laid out by The Wild Free-Roaming Horses and Burros Act of 1971 to such an excess that land is being taken away from federal lands ranchers to accommodate 3600 horses where only about 280-500 can thrive.

Advocates don’t offer effective solutions and often disagree on methodology. The only common thread is suing to stop proactive efforts of management. FOA sued the BLM to stop spaying. ALDF sued BLM to stop roundups. WHOA sued the New Mexico Livestock Board to categorize stray horses as wild horses, exempting them from trespass capture on BLM and private land.

Professional activists are not held accountable for the results of their actions. If activists don’t want horses rounded up they sue for birth control. Then, they sue because they don’t like the birth control method. Upon the panel’s recommendation, the Humane Society of the United States took this high profile opportunity to recommend a proven failure of a method.

Why should anyone listen to HSUS when they don’t have any experience caring for animals or managing lands? Notice the predatory opportunism? The more these advocacy groups get their way, the worse off these horses become. HSUS makes $150 million per year. They have the means to purchase the 45,000 horses that are in holding pens right how.

Save Them by Bringing Back their Economic Value

At a rate of increase of 20% per year mustangs outgrow their management areas exponentially. If we love or respect the mustangs, we need to make decisions that benefit the horses and their environment; not our ‘Disney-fied’ sensibilities where some people need to be protected from the fact that things die. A compassionate and rational person may ask: Can any benefit be drawn from preventing suffering by offering a humane death? The WFRHBA must be amended to allow commercial use of mustangs.

To directly reduce the numbers of 115,000 struggling mustangs, horse meat processing plants must be opened in the USA. This spares feral as well as hundreds of thousands of domesticated horses a grueling 3000 mile journey to Canada and Mexico for processing. It will offer the USA control and responsibility for the welfare of horses slated for harvesting: from the collecting and transport phases through slaughter via USDA approved plants.

Permitted game hunting is known around the world for bringing huge proceeds and encouraging private landowners to invest into maintaining wildlife areas.

Alleviate unnecessary pressure off of taxpayers. Allow townships to manage their own resources: the land and the horses on that land. Ecotourism and Agritourism are growing sectors. Ecotourism is benefitting the Asseteague National Seashore and their free roaming ponies to the tune of $110M per year. Deferring to the government or tax exempt organizations to protect mustangs will never solve the overpopulation problem.

Andra Constantin is the enamored owner of an opinionated 20 year old gelding, who has opened her eyes to the differences between animal welfare and the extremist ideology of animal rights.