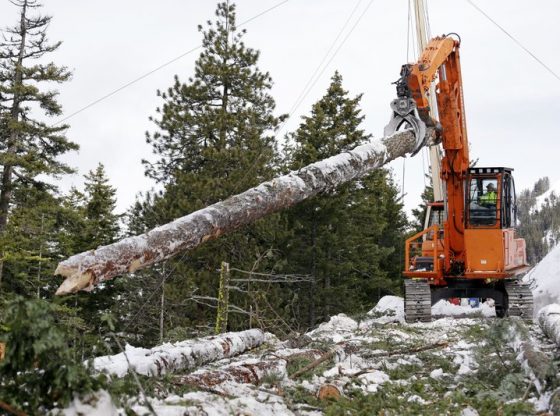 The restoration thinning project outside the city of Cle Elum mirrors numerous projects in forests across the U.S. West, mostly on federal public lands, aimed at preventing wildfires and restoring forest health.

The project by a private landowner also represents a fraction of the millions of acres that some say need to be treated to prevent the kind of intense wildfires that have scorched thousands of acres across the U.S. West.

CLE ELUM, Wash. (AP) — To restore a forest and reduce the risk of severe wildfires, a conservation group is cutting down trees.

The Nature Conservancy is selectively logging dry forests in Washington’s Central Cascades as part of a long-term plan to make thousands of privately owned forestland more resilient to fire, disease and climate change.

A century of wildfire suppression has resulted in overgrown tree stands that are ripe for fire, so the group is weeding out smaller trees that can serve as kindling for fires. They’re leaving bigger, older and more fire-resistant ponderosa pines while removing tree species such as grand fir that are more susceptible to fire.

“We’re changing how the fire would burn, and changing it from severe to a fire that would be good and would maintain forest health,” said Ryan Haugo, senior forest ecologist at The Nature Conservancy. “We’re trying to mimic the role that fire would naturally play.”

The restoration thinning project outside the city of Cle Elum mirrors numerous projects in forests across the U.S. West, mostly on federal public lands, aimed at preventing wildfires and restoring forest health.

The project by a private landowner also represents a fraction of the millions of acres that some say need to be treated to prevent the kind of intense wildfires that have scorched thousands of acres across the U.S. West.

A 2014 analysis by The Nature Conservancy and the U.S. Forest Service identified more than 11 million acres (4.45 million hectares) of dry forest in Oregon and Washington that are in need of restoration.

Not everyone agrees on what role thinning should play in restoring forests or at what pace and scale it should happen.

Some say thinning, if not done right or strategically, may cause more harm than good, especially when new roads are built or commercial logging is done in remote or sensitive areas. Others worry that too often restoration is used as an excuse to commercially log more public lands.

Dominick DellaSala, chief scientist of the Geos Institute in Ashland, Oregon, said thinning that’s done right can be a good tool but it’s not the only one.

“I don’t see it as a panacea and it should be strategically used to defend homes and lives and get into the truly flammable area,” he said. Often missing from the equation is letting fires burn naturally under safe conditions, he added.

On a cold winter day, a small local crew hired by The Nature Conservancy used a yarder, a large piece of logging equipment that relies on a cable system, to haul freshly cut trees, some about 100 feet (30 meters) in length, up a steep hill to the snow-covered road.

For much of the past winter, the crew has been thinning about 100 acres of dense forestland high above Cle Elum Lake.

The land is part of nearly 75 square miles (194 sq. kilometers) on the east slopes of the Cascades that the conservation group bought from Plum Creek Timber in 2014 with the goal of protecting wildlife habitat and water quality and providing recreation access while also actively managing the forest, including logging to pay for restoration activities.

Once the logs are stacked in a pile, another worker revs up a chain saw and trims out smaller limbs. He marks them for length so they can be hauled to saw mills in the state where they are sold for timber products.

In places where they can, the group is trying to produce income to offset costs of managing the land as well as provide local jobs.

“What we’re trying to show is that this is sustainable. You can make a profit here and treat a lot of these forests that need to be treated,” said Brian Mize, Central Cascades field forester for the Nature Conservancy.

“Just doing nothing, I think we what know the results are going to be, especially in the context of climate change.”