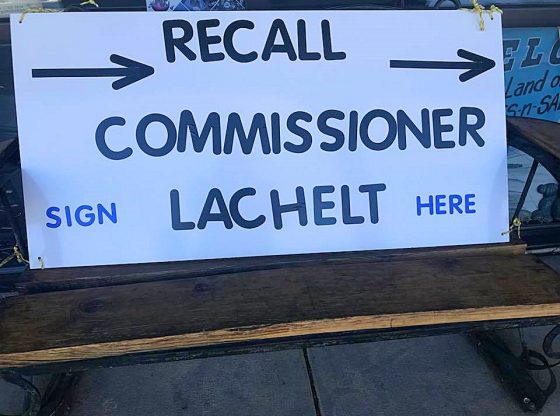 A short time later, the same woman reappeared and made an attempt to reach in the store and destroy the replacement sign. Michelle was close to the entrance of the store when the woman reached in, but armed with her cell phone she was able to prevent the woman from stealing the sign and also captured video of the woman as she fled down the sidewalk.

Update: The vandal in the report has been identified as Mary Frenette of Durango, Colorado.

Supporters of La Plata County’s embattled commissioner, Gwen Lachelt, have resorted to bizarre, childish tactics to deter local citizens from signing a petition demanding her recall. Lachelt has been the subject of controversy since it was discovered that her position as county commissioner was being used as a platform to simultaneously carry on paid environmentalist lobbying activities for one of her progressive non-profit organizations, Western Leaders Network. A group of local La Plata County citizens, appalled by her conflicts of interest, radical policy proposals, and large number of days missed on the job as a commissioner, recently launched a recall effort, garnering thousands of signatures from residents within the county.

As we have previously reported, Lachelt’s anti-recall effort, known as ‘United Against the Recall: Decline to Sign,’ has garnered cash donations from green billionaire, Tom Steyer, via Conservation Colorado, and other supporters, many from outside La Plata County, including locales such as Colorado’s Front Range, New Mexico and California. Reportedly, supporters of Lachelt have been using intimidation tactics, such as boycott threats and the spreading of misinformation through incendiary flyers, to discourage participation in the recall petition drive. Using one of the extreme greens’ favorite shibboleths, Lachelt’s group has produced paranoid flyers claiming that journalists and citizens supporters of the recall are funded by ‘dark money’ from the Koch Brothers.

It appears that Lachelt’s supporters have added vandalism and harassment to their arsenal. Last Saturday, March 24, Kelly’s Cowboy Company was vandalized during broad daylight by an apparent Lachelt supporter.

According to Tiffany Morlan, who was working at the retail clothing store at the time, an elderly woman stuck her head in the front door of the business and ripped a sign supporting the recall of Lachelt off the inside of the front entrance, apparently destroying the sign and discarding it somewhere outside the store. Kelly’s Cowboy Company has a larger sign hanging above the front of the store which remained untouched by the vandal.

Tiffany explained that she and her co-worker, Michelle, quickly made a similar sign to replace the stolen sign, and taped it in the same location. A short time later, the same woman reappeared and made an attempt to reach in the store and destroy the replacement sign. Michelle was close to the entrance of the store when the woman reached in, but armed with her cell phone she was able to prevent the woman from stealing the sign and also captured video of the woman as she fled down the sidewalk.

Following the initial vandalism incident, Tiffany was able to obtain a description of the woman’s car and license plate number. The incident was reported to the Durango Police Department, who, according to Tiffany, was able to identify the woman and will charge her with misconduct. She also indicated that the Durango P.D. will release a full report on Thursday, at which time the woman’s identity will be made public.

Recall supporters have reported that incidents of verbal abuse and intimidation have escalated as the March 30 deadline for the petition campaign nears. Dave Peters, one of the recall organizers explained, “There have been several times where people have come into Kelly’s Cowboy Company and cursed them out then slammed the doors. Last week the paid ‘Decline to sign’ people were in front of her store and didn’t leave after they we told they were on private property. The police responded and they moved.”

But when asked whether or not these tactics have worked to drive away supporters of the recall, Tiffany said, “People are actually happy we’re helping with the recall, and it’s bringing in more business.”  Tiffany went on to say that between her and Michelle they have gathered over 75 signatures at the store.

You can find out more about Kelly’s Cowboy Company by going to their Facebook page.

For more about the recall and the history of Gwen Lachelt, visit here.