Panicked enviros throwing everything at the courts to see what sticks

Home /Extreme Greens, latest_news/Panicked enviros throwing everything at the courts to see what sticks 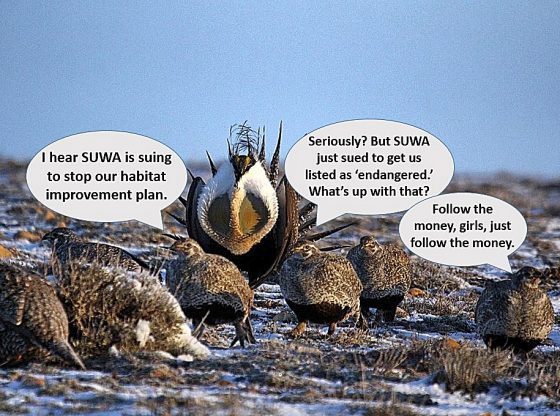 Remember, these enviro groups need crises to keep the donations flowing, but if sage grouse enjoy healthy habitat and robust, growing populations, there is no longer a crisis to get hysterical about. If Utah’s Watershed Restoration Initiative continues to be successful in restoring habitat and boosting sage grouse numbers, SUWA and its corporate environmentalist cronies will have to look elsewhere for a crisis to exploit.

Just last week, Utah’s most obnoxious extreme green group, Southern Utah Wilderness Alliance (SUWA), had a big setback in court, and rightfully so, because its basis for the court action was at best, specious. Political operatives at the helm of the Sierra Club; the now unrecognizable, deconstructed soul child of John Muir, are guilty also of lobbing lawsuit bombs they know are duds. But green groups such as the aforementioned are essentially lawsuit mills, run by people with a lot of experience in dragging governmental entities to court. So, one might be inclined to ask, “what are the extreme greens doing gumming up the courts with weird and contradictory actions that are even weirder and more contradictory than usual?” The probable motive behind the greens is…well…the greenback. Read on.

On Friday, November 3, the Southern Utah Wilderness Alliance (SUWA) received a stinging rebuke from the federal court in Salt Lake City. The court denied the radical group’s request for a temporary restraining order that would halt progress on the Sage Grouse Rehabilitation Plan being implemented by Iron and Beaver Counties in southwestern Utah. The Sage Grouse plan is a project of the “Watershed Restoration Initiative,” (WRI). The WRI partners the Natural Resources Conservation Service (NRCS),the Bureau of Land Management (BLM), and other federal agencies with local governments in order to reach stated conservation goals, one of which is maintaining healthy sage grouse populations in Utah.

In a news release dated April 21, 2016, the NRSC states its goals for sage grouse, and details some of its projects:

To prevent sage-grouse from becoming listed under the Endangered Species Act, Utah adopted a Greater Sage-grouse Conservation Plan. The plan emphasizes habitat restoration on state, private and federal lands within areas identified as Sage-grouse Management Areas (SGMAs). Eleven of the twelve SGMAs in Utah have an increasing population trend over the last three years; however, the Sheeprocks SGMA has decreased to a critically low population level. In the Sheeprocks, the joint RCPP and WRI project will focus on combating pinyon-juniper encroachment and preventing catastrophic fires – major causes for the decline of sage-grouse in the area.

Objectives for RCPP grant over the next 5 years include the following:

Improve over 17,000 acres of sage-grouse and other wildlife habitat by reducing pinyon-juniper encroachment, weed invasion and the risk of  catastrophic fire

Past work in the Sheeprocks area include the following:

In the last three years, six large scale fires have burned in the area.  Fire rehabilitation has occurred on over 16,000 acres of these burned areas.

Since 2006, an additional 77,000 acres of habitat and watershed improvement were completed.

Complete 8,000 to 10,000 acres of habitat and watershed improvement annually.  At this rate it will take about 15 years to complete improvements on the land that we have identified as priority habitat for sage-grouse and other wildlife.

The Iron/Beaver Counties project is similar to past efforts to clear excess juniper and pinion trees to improve habitat for sage grouse and other species which thrive in sagebrush-rich areas. And, ironically, in the past SUWA has filed lawsuits attempting to place the sage grouse on the endangered species list. So, why would a group that purports to champion the environment and wildlife initiate a contradictory effort to halt a project designed to improve sage grouse habitat? Although it’s impossible to get inside the heads of people who paint their faces up like badgers, it’s not hard to see that SUWA, and its ilk, need a constant supply of environmental crises to: (1) Garner ample donations from supporters using ‘the sky is falling’ hysteria campaigns, and (2) use the courts, and ill-conceived sue and settle processes, to pocket millions from U.S. taxpayers in the form of settlements and reimbursed attorneys’ fees.

There is an even creepier motive that could be behind SUWA’s latest boner. Remember, these enviro groups need crises to keep the donations flowing, but if sage grouse enjoy healthy habitat and robust, growing populations, there is no longer a crisis to get hysterical about. If Utah’s WRI continues to be successful in restoring habitat and boosting sage grouse numbers, SUWA and its corporate environmentalist cronies will have to look elsewhere for a crisis to exploit.

On October 30, the Sierra Club joined other environmental special interests in a legal effort to stop construction on a Pennsylvania natural gas pipeline project that is already well underway. Describing the Sierra Club’s latest lawsuit as ‘frivolous,’ on November 3, Marcellus Drilling News posted this:

The odious Sierra Club is at it again. Using what appears to be endless supplies of money from people like the Rockefellers, the Sierra Club, along with a mishmash of other radical environmental groups, filed an emergency motion in federal court on Monday, asking the court to stop any further work on the Atlantic Sunrise Pipeline. Atlantic Sunrise is a $3 billion, 198-mile natural gas pipeline project running through 10 Pennsylvania counties to connect Marcellus Shale natural gas from northeastern PA with the Williams’ Transco pipeline in southern Lancaster County.

Williams, the company building/owning the project, broke ground in September. Since that time 29 radicals in two different protests have been arrested for blocking construction in Lancaster County. However, the work continues–at a rapid pace. Williams knows the longer they take, the more likely antis will find a way to slow or stop the construction. On Monday the Sierra Clubbers filed their latest “throw everything against the wall to see if something sticks” frivolous lawsuit to try and stop it–to give their other (numerous) frivolous lawsuits a chance to work their way through the court system, in hopes something, anything will work to stop the project…

The Sierra Club claims to be protecting forests and farmland from the impacts of the pipeline. But pipeline projects, such as the Atlantic Sunrise Pipeline (ASP), are realized only with the buy-in from governmental and private stakeholders, and by surviving arduous, years-long strings of environmental impact assessments, geological reviews, land surveys, hydrological studies, and cooperative agreements with private property owners, state and federal agencies, tribes, and all others involved.

Not unlike SUWA, the Sierra Club is run by professional law-suers, who know exactly how much effort and regulatory control is involved in pipeline construction. And it’s a near certainty that ASP developers have honored state and federal regulations, and have the documentation to prove it, in court if necessary. So again, the motivation of this self-proclaimed defender of the environment for picking a losing fight in the courts is a riddle indeed. Natural gas is the least dirty of all fossil fuels, and a great deal cleaner than Pennsylvania coal. The environmental, economic and human benefits of natural gas are clear. And, let’s not forget that ecoterrorists guilty of ‘blocking’ construction and carrying out attacks against pipelines, have more often than not, left environmental destruction in their wake. Sierra Club is a political organization carrying out a political agenda, and as usual, the environment takes a back seat to its need to create a crisis mountain out of a ‘meh’ molehill.

Let’s be honest. The core motivation for SUWA, Sierra Club and their countless spin-offs, is money. It’s always been money, and will always be money. And when your business is to convince donors that the sky is falling, you need an occasional crisis to make your point, even if the crisis is the manufactured kind.