Is this Colorado university conducting a ‘migration study’ or a public lands push poll? 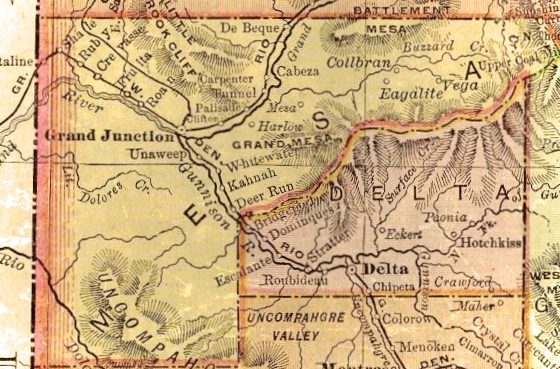 [The poll] fails to address other factors you would think are important to a ‘rural migration survey,’ such as; did you relocate to Mesa County, from where, did you move from a small town, the suburbs or a city, did you relocate for employment, how many children do you have, in what field are you employed?, etc. But none of those ‘migration’ factors are included in the survey, which makes it suspect.

Public Lands: “…the public lands have been defined as those lands subject to sale and other disposal under the general land laws” (Utah Div. of State Lands v United States, 482 US 193 (1987)).

Push Poll: An ostensible opinion poll in which the true objective is to sway voters using loaded or manipulative questions.

Colorado Mesa University’s (CMU) ‘Social Research Center’ has invited a random sampling of folks residing in Mesa County, Colorado to participate in the ‘Rural Colorado Migration Study.’ With such a title, one might assume that the CMU Social Research Center is looking for data on migratory movements, economic drivers, regional cost of living, and so forth, but the ‘survey’ touches only lightly on those data points. This appears to be less a ‘migration study’ and more of a ‘Public Lands’ push poll, designed to gather data on residents’ feelings about ‘public lands’ in Western Colorado.

For a little background, the term ‘public lands’ has been misconstrued to include all lands under strict control by the federal government, more specifically, federally regulated set-asides and tourist magnets such as national parks, monuments, conservation areas, wilderness areas, and Bureau of Land Management (BLM) managed lands. In recent years ‘public lands’ have taken on a mystique akin to that of the ‘revered’ national parks; pristine places of wonder, preserved for their inherent beauty and the enjoyment of sightseers and outdoor recreation enthusiasts. But public lands, under law, are generally designated for multi-uses; including mining, logging, oil and gas extraction, ranching, energy development, fishing, hunting, with ‘recreation’ only as a by-product of their ‘public’ status. As a matter of fact, the Federal Lands Policy Management Act (FLPMA) makes it clear that public lands are not to be considered exclusive enclaves withdrawn from traditional, resource-based economic ventures, but exist to support such activities, as illustrated by the following provisions:

(2) the national interest will be best realized if
the public lands and their resources are periodically
and systematically inventoried and their present
and future use is projected through a land use
planning process coordinated with other Federal
and State planning efforts;

(7) goals and objectives be established by law
as guidelines for public land use planning, and that
management be on the basis of multiple use and
sustained yield unless otherwise specified by law;

(10) uniform procedures for any disposal of
public land, acquisition of non-Federal land for
public purposes, and the exchange of such lands
be established by statute, requiring each disposal,
acquisition, and exchange to be consistent with the
prescribed mission of the department or agency
involved, and reserving to the Congress review of
disposals in excess of a specified acreage;

(12) the public lands be managed in a manner
which recognizes the Nation’s need for domestic
sources of minerals, food, timber, and fiber from
the public lands including implementation of the
Mining and Minerals Policy Act of 1970

The CMU poll asks for perfunctory demographic identifiers, such as years lived in Mesa County, marital status, income, etc., but fails to address other factors you would think are important to a ‘rural migration survey,’ such as; did you relocate to Mesa County, from where, did you move from a small town, the suburbs or a city, did you relocate for employment, how many children do you have, in what field are you employed?, etc. But none of those ‘migratory’ factors are included in the survey, which makes it suspect.

The more personally popular candidate usually wins, but what happens when both candidates are viewed unfavorably? pic.twitter.com/zzjzdRXVpY

Nearly half (45%) of PA registered voters give the President an “F” grade for his handling of health care. https://t.co/QWD7uE3gRX pic.twitter.com/8LIflnKAFL

More PA Republicans give the President an “F” than an “A” on dealing with climate change. Full report: https://t.co/QWD7uE3gRX pic.twitter.com/x2pQxhrbqG

The CMU poll asks questions about what factors have an impact on the quality of life, with a focus on federally-controlled public lands, and a misleading emphasis on outdoor recreation.

The following questions are about public lands.

Public lands are managed by the government to regulate a variety of uses including (but not limited to) outdoor recreation, energy resource extraction, and conservation. Land management agencies include (among others) the Bureau of Land Management, the Forest Service, and Colorado Parks and Wildlife.

Do you agree or disagree, with the following statements?

The CMU survey fails to acknowledge that Mesa County has always been a largely agricultural region, dominated by large cattle and sheep ranches, farms, and orchards. Grazing on public lands, which is key to public lands management in the area, is barely mentioned.

How much do the following features of public lands affect the quality of life in Mesa County?

Skirting traditional drivers of the Western Colorado economy, it asks:

What is the greatest benefit of having public lands in Mesa  County?

The survey, already having implied that recreation is the dominant activity on public lands, may be using this open-ended question to gather data which promotes the false narrative that ‘conservation’ and outdoor recreation on public lands are more important than resource-based economic activities. Although it has the appearance of neutrality, it may, as in other public lands push polls, capitalize on conventional ignorance concerning the true definitions and purposes of public lands. Despite that the fact that the economic bedrock of Western Colorado consists of Ag, mining and oil and gas, one has to wonder realistically, how many polled would answer, ‘cattle grazing,’ ‘hard rock mining,’ or ‘fracking?’

Are there any problems or issues created by having public lands in Mesa  County?

This should be rephrased, “Are there any problems or issues created by the federal government having control over 72 percent of the lands in Mesa County?”

What is the single greatest problem or issue of having public lands in Mesa  County?

This should be rephrased, “What is the single greatest problem or issue of federal overreach, overregulation, and restrictions on public lands in Mesa County?”

Are you able to view public lands from your home?

This is a lifestyle question, not a ‘rural migration’ question.

Is the view of public lands from your home…

Seriously? How is this part of a ‘scientific’ survey?

How many time per year would you say you visit the public lands in Mesa  County?

•Never, Not at all

It would add credibility to this poll if it queried the working folks of Mesa County about who makes a living on public lands through the BLM grazing, coal, mineral, oil & gas, leasing process, or how much time is spent working versus recreating on public lands.

What is your primary outdoor recreation activity on public lands?

And then, as if federally-controlled outdoor recreation destinations are the be-all, end-all of living in  Mesa County, it asks:

How much do each of the following public lands improve the quality of life in Mesa County?

The CMU poll then queries educational level, marital status, ethnic and racial background, household income, and whether or not your household has a cell phone and/or a landline.

It would be reassuring, even comforting, if this CMU poll were truly about ‘rural migration,’ but one can make the case that the imbalance in its composition proves it to be a political push poll. Although residents of Mesa County, as with most rural counties across the country, enjoy outdoor activities; hunting, fishing, camping, etc., the ‘outdoor recreation’ ethos is an relatively recent political construct, designed to sway the public’s understanding of rural America, especially in the West, which was built, and continues to thrive on agriculture and the development of our vast supplies of natural resources.