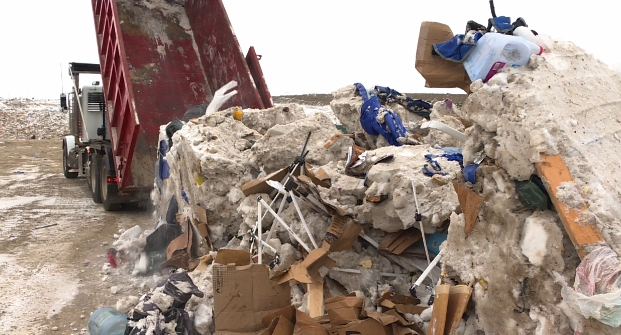 I’m not sure what all of this is supposed to mean. That leftists and litterbugs go together? That so-called environmentalists are actually hypocrites willing to destroy the environment in order to make a point? That we live in such a prosperous society that people who style themselves oppressed victims can think nothing of abandoning valuable items such as sleeping bags and food supplies whenever they feel like it?

The Standing Rock protest may be over, but here’s one thing that won’t be over for quite some time: the standing mountain of trash that the ever-so-environmentally concerned protesters of the Dakota Access Pipeline left behind when they abandoned their makeshift camp on the Standing Rock Indian reservation in North Dakota at the end of 2016. The Washington Times reports:

Clean-up crews are racing to clear acres of debris at the largest Dakota Access protest camp before the spring thaw turns the snowy, trash-covered plains into an environmental disaster area.

The U.S. Army Corps of Engineers announced Friday that the camp, located on federal land, would be closed Feb. 22 in order to “prevent injuries and significant environmental damage in the likely event of flooding in this area” at the mouth of the Cannonball River in North Dakota.

“Without proper remediation, debris, trash, and untreated waste will wash into the Cannonball River and Lake Oahe,” the Corps said in its statement.

Those involved in the clean-up effort, led by the Standing Rock Sioux, say it could take weeks for private sanitation companies and volunteers to clear the expanse of abandoned tents, teepees, sleeping bags, blankets, canned food, supplies and just plain garbage littering the Oceti Sakowin camp.

An update from West Dakota Fox:

Sanitation crews are working hard to dispose of six months’ worth of garbage from a community the size of Wahpeton or Valley City. The mountains of debris need to be moved before the spring thaw occurs.

Making a dent in the immense amount of trash being hauled out of the Oceti Sakowin protest camp is being hindered by the weather. All the garbage that was left behind is now frozen into massive chunks of junk.

In a month, all this trash could become toxic

It’s estimated it will take 250 trucks filled with litter to clear the camp.

The controversial pipeline, which protesters and environmental activists say has destroyed cultural sites and will harm the surrounding areas — potentially contaminating the drinking water of indigenous people living in the pipeline’s path — has spurred months of protest, including camps maintained in a sub-zero North Dakota winter.

The Standing Rock Sioux, the main Native American tribe involved in the protest, went so far as to assert that construction of the 1,172-mile oil pipeline would involve the bulldozing of “sacred sites” in their indigenous religions. The “Stand With Standing Rock” website displays a poetic video of Indians clad in traditional deerskins and feathers conducting a ritual on the pipeline site.

But somehow the sense of the sacred—that had attracted thousands of activists, including such disparate left-leaning advocacy groups as Code Pink and Black Lives Matter, to set up their makeshift camp on the freezing reservation—vanished into thin air after the U.S. Army Corps of Engineers, which had first denied a permit that would let the pipeline construction go forward, issued an eviction notice to the protesters on Feb. 3, and on Feb. 7 announced it would issue a final permit allowing the pipeline to be built after all.

I’m not sure what all of this is supposed to mean. That leftists and litterbugs go together? (Remember the mess that the various Occupy protesters left behind in city parks across the nation in 2011 when they decided they’d had enough of sleeping outdoors in filthy tents.) That so-called environmentalists are actually hypocrites willing to destroy the environment in order to make a point? That we live in such a prosperous society that people who style themselves oppressed victims can think nothing of abandoning valuable items such as sleeping bags and food supplies whenever they feel like it?

You’ve got me, but one thing is certain: Talk of “sacred sites” seems to have been so much blather when push came to shove.