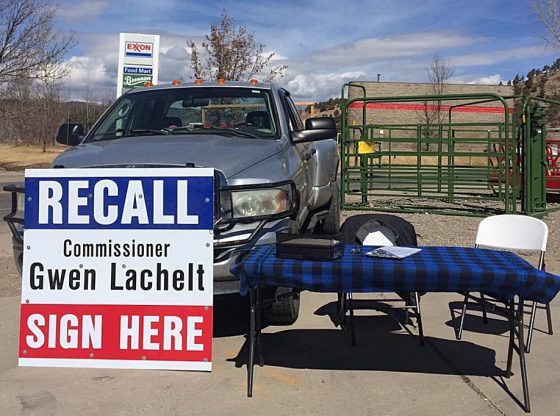 According to organizers of the recall, Lachelt is using paid professional agitators to impede and intimidate individuals and businesses from participating in the petition recall. The tactics include boycott threats against local businesses, harassment of volunteer petition gatherers, and the intimidation of a local veteran’s group.

La Plata County, Colorado’s embattled county commissioner, Gwen Lachelt, is fighting for her political life against a local recall effort, and it appears she’s using intimidation as a key tactic. A coalition of citizens has launched the recall effort in response to Lachelt’s use of her position for environmentalist lobbying and pushing a radical green agenda. The citizen group sponsoring the recall is following statutory processes in their recall effort, to which gathering signatures on an official recall petition is central. According to organizers of the recall, Lachelt is using paid professional agitators to impede and intimidate individuals and businesses from participating in the petition recall. The tactics include boycott threats against local businesses, harassment of volunteer petition gatherers, and the intimidation of a local veteran’s group. According to a press release issued by the group:

…tactics have included threats to boycott business that have allowed petition circulators on their property, and harassment of circulators. In downtown Durango one person fighting the recall stated they were being paid by Conservation Colorado. They have also complained to CDOT that petition circulators should not be allowed to have petitions signed along side of state highways even though this is just a recall effort not an election.

Petition circulators asked and received permission from the VFW to get petitions signed at their parking lot. Gwen’s supporters threatened to turn them into the IRS claiming they were in violation of the lobbying rules for a 501 c3.  Allowing circulators on the VFW location is clearly not a violation of the IRS rules.

Lachelt, a high-profile figure in Colorado’s radical environmentalist circles, has rallied supporters to flood the local paper, Durango Herald, with letters to the editor in her support. Lachelt’s anti-recall crusaders have resorted to false assertions that the Liberty Coalition is backed and funded by the Koch brothers and ‘big oil.’ A ‘dog whistle’ to the environmental Left, connecting the recall to the Kochs is likely an attempt to obfuscate her own conflicts of interest, which ignited the recall effort in the first place. As we reported last month:

Lachelt, well-known in southwestern Colorado for her environmentalist activism, is acquainted with controversy. She helped found a number of anti-oil and gas groups, including San Juan Citizens Alliance (SJCA), EarthWorks Oil & Gas Accountability Project, and most recently, the left-leaning environmental lobbying group, Western Leaders Network (WLN). While serving as La Plata County Commissioner, Lachelt has been receiving payments from WLN to support her travel and lobbying activities. The failure to disclose her paid position with WLN and conflicting dual roles triggered a citizen ethics complaint to the Colorado Independent Ethics Commission. In spite of evidence verifying Lachelt’s conflicts of interests, the ethics complaint was dismissed and she continues to work for WLN.

According to Dave Peters, one of the organizers of recall, La Plata County citizens involved with the effort to oust Lachelt are volunteers, and funding comes primarily from within the county in the form of small contributions. Interestingly, with no evidence of outside funding going into the recall campaign, Lachelt herself has the backing of one of America’s most politically-aggressive billionaires, Tom Steyer. Steyer, who lives in California and has poured millions into Colorado anti-gun campaigns and political races, appears to have an interest in preserving Lachelt’s career. News broke last month that Steyer was intervening to help Lachelt, and the Durango Herald confirmed reports that he was funneling thousands of dollars to Lachelt’s anti-recall effort, ‘United Against the Recall’ through the green non-profit, Conservation Colorado. The recall group is calling for Lachelt to disclose all of her financial reports, including how much she was paid by Western Leaders Network for environmentalist lobbying activities during her term as county commissioner.

Beyond using her commissioner platform to lobby for environmental special interests, which have been, at times, in conflict with the best interests of La Plata County, Lachelt has also drawn fire over a recent planning code debacle, from which she has had to do some serious backtracking. On January 17, Pine River Times reported:

However, certain members of La Plata County’s ranching and farming community have opposed the idea of land-use codes since the beginning, calling them unnecessary and an attempt to covertly take their land.

On Tuesday, more than a thousand people packed into the La Plata County Fairgrounds for a public forum with county commissioners and staff.

Fossel went on to call the land-use codes an extreme example of “big brotherism,” “branded socialism” and a “blatant taking of property rights.”

There were a number of specific issues county residents brought up with the land-use codes.

For one, the codes place some restrictions within a river corridor and scenic overlay along certain roadways that county officials say aim to protect the scenic quality of the county.

Animas Valley rancher Ed Zink, however, said his property is surrounded by both and the restrictions go too far.

Durango, the county seat of La Plata County, was built on a natural resources economy. Like a number of other towns in southwest Colorado, such as Ouray and Telluride, with local governments that have grown increasingly progressive, tourism and other eco-centric industries have slowly supplanted mining, oil and gas development, ranching and farming. In this case, the recall organizers hope to show that green activists in local government, such as Lachelt, do not represent the majority of local citizens. But this grassroots group has an uphill battle. Despite Lachelt’s questionable activities as county commissioner and misguided and economically destructive policy initiatives, she is backed by big green money, and a network of activists who are economically and ideologically invested in keeping her in power.

Oh the irony! It turns out the queen of outside dark money is actually Commissioner Lachelt herself.

Even more troubling is Lachelt has made baseless actuations against our group of La Plata County citizens who have dared to raise questions about her relationship with outside organizations. These citizens have stated Lachelt doesn’t represent their interests and has acted unethically. The group has started a grass roots effort to recall her. Read more here