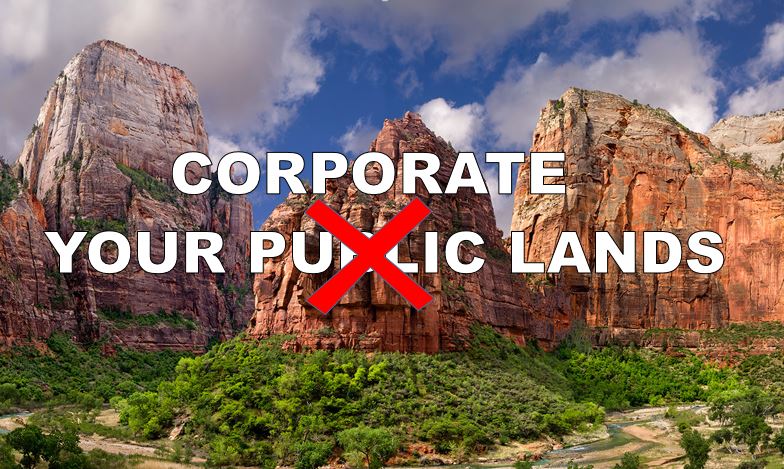 Government cronyism has had a disquieting and steep upward trend during the Obama Administration. Whether it be ‘alternative’ or ‘green’ energy corporations like Solyndra, receiving hundreds of millions in subsidies, or outdoor recreation companies getting rock star treatment by federal management agencies, these extra-constitutional trysts show disdain for ordinary Americans and their representatives.

The National Park Service (NPS) is chronically in the red, not just a little over budget, but hundreds of millions in arrears with over $12 billion in maintenance backlogs alone. As the National Park Service cries for more taxpayer funding, the American people wonder where their annual budget of over $3 billion is going. But the NPS isn’t just a leech sucking cash out the American taxpayer, it depends on thousands of volunteer hours and millions in donations from myriad foundations to keep the gates of its parks and monuments from falling off their hinges.

In what might seem like a common-sense response to its chronic shortfalls, the NPS has hatched a plan to bring several global corporations onboard as sponsors of the numerous national parks, monuments and historic sites under its direction. But this plan is less a private/government partnership than it is a scheme to shield NPS from fiscal accountability while inflating the bottom lines of participating global corporations.

There is no effort to hide the crony entanglements between NPS and big business. Although a few authentic philanthropic foundations have stepped forward to help, news came out earlier in 2016 that NPS would be using public spaces within its various attractions to feature the logos of corporate sponsors. Outcry ensued, but NPS did not back off of the idea. A recent article in Greenwire reported:

…the agency moved to scale back from the draft plan ways in which corporate logos can be used in national parks.

As in the original 2008 philanthropy policy, parks can still acknowledge companies’ support in printed material, audiovisual products, and temporary construction or restoration signs. But NPS removed a provision in the proposed overhaul that would’ve also allowed small logos to be placed on exhibits and waysides.

The final order did not, however, remove language encouraging superintendents “to join philanthropic partners in meetings with prospective donors.”

Critics of the policy change fear that superintendents will now be forced to follow the lead of Jarvis, who has flown across the country in search of donations from companies and people who they worry may not have the Park Service’s best interests at heart.

For example, former Interior Department officials as well as environmental and consumer watchdog groups have been troubled by some of the deals Jarvis struck with an alcohol giant and foreign carmaker in support of the 2016 NPS centennial. During a 29-month period leading up to that event, the director took more than a dozen trips that were partially or entirely devoted to fundraising, an E&E News investigation found.

Nonetheless, the final policy encoding NPS/corporate interbreeding, which carries the creepy title, ‘Director’s Order #21,” is all about creating a symbiosis between the agency and ‘philanthropic partners.’ The introduction of the order reads:

This Director’s Order (Order), together with the Reference Manual to Donations and Philanthropic Partnerships, supersedes and replaces Director’s Order #21:  Donations and Fundraising, dated July 11, 2008, Policy Memorandum 14-04, and any other previous guidance on this topic.  The change in title reflects the evolving nature of this field and the importance of philanthropic partners to accomplish the work of the National Park Service.  The Department of the Interior Office of Policy, Management and Budget has reviewed and approved this Order, as required by the Department of the Interior donations policy (374 DM 6).

Big outdoor recreation corporations, calling themselves the Conservation Alliance, have been lobbying the Obama Administration to seize millions of acres for new national monuments. Their talking points say ‘preservation,’ but their actions say ‘we’re creating vast new recreation destinations so millions of tourists will buy our stuff.’ The very moment Obama made the Christmas Eve declaration that 1.35 million acres in SE Utah would be locked away to form the Bears Ears National Monument, Patagonia launched a website ‘celebrating’ the land grab. The website has the look and feel of a political action organization–which it is–but behind all the environmental posturing is a brazen quest for private profit from public lands.

Free Range Report posted recently about the ruthless tactics used by the Conservation Alliance in achieving its goal of replacing resource-based local economies with tourism, thus drawing millions to the wild West who will purchase gear so they may properly enjoy their corporate National Parks experiences:

From the get-go, big outdoor recreation corporations lobbied the Obama Administration to designate Bears Ears (Utah), Owyhee Canyons (Oregon), and other semi-wild places as national monuments. This coalition of big rec corporations calls itself the Conservation Alliance and includes the likes of The North Face, Columbia, Black Diamond, Patagonia, Petzl America, REI, KEEN, and others, and it prides itself on the growing number of acres gobbled up through federal proclamations.

Despite their ‘conservationist’ talking points, it’s clear the companies pushing the creation of national monuments simply want to boost tourism and outdoor recreation opportunities, which balloons their bottom lines. The fact that such federal designations crush other resource-based economic activities, and destroy rural communities, is apparently of no consequence to big rec.

The incestuous relationships between federal agencies and global corporations have also been covered in recent investigative news reports. Pertaining to the designation of the Bears Ears National Monument–which was vehemently opposed by the locals and Navajo and Ute tribes in San Juan County–the Deseret News reported:

In October 2014, a group of people sat around a table and discussed their campaign to bring a monument designation to southeast Utah for the region they called Bears Ears.

This wasn’t a group of Native American tribal leaders from the Four Corners, but board members from an increasingly successful conservation organization who met in San Francisco to discuss, among other things, if it was wise to “hitch our success to the Navajo.”

The reporter, Amy Joi O’Donoghue, went on to explain:

Support for a Bears Ears monument includes outdoor business leaders, who came together Thursday in a press conference at the Outdoor Retailer Show. In a packed room in downtown Salt Lake City, they outlined why 15 leading companies are in support of a national monument designation.

“It is a place that is absolutely iconic in the form of recreational opportunities that are available such as climbing, hiking and water sports. It is an incredible treasure in the state of Utah,” said Hans Cole of Patagonia. “As an industry we rely on these protected places, and so for us it is an economic driver. But it is also deeply personal because of the landscape.”

Behind the guises of environmentalism and tribal rights, these big corporations have ‘hitched’ themselves to a government-driven opportunity to grow Utah’s customer base for their outdoor recreation products.

The degree of capital and emotional investment on the part of the outdoor recreation industry in Obama’s monuments push was made evident in a recent article published by the Patagonia Blog. The author castigated Utah’s political leaders and residents for not sufficiently embracing the outdoor recreation industry’s land-grabbing objectives. Stinging with rejection, it stated:

You’d think politicians in Utah would bend over backwards to make us feel welcome. But instead Governor Gary Herbert and his buddies have spent years denigrating our public lands, the backbone of our business, and trying to sell them off to the highest bidder. He’s created a hostile environment that puts our industry at risk.

Government cronyism has had a disquieting and steep upward trend during the Obama Administration. Whether it be ‘alternative’ or ‘green’ energy corporations like Solyndra, receiving hundreds of millions in subsidies, or outdoor recreation companies getting rock star treatment by federal management agencies, these extra-constitutional trysts show disdain for ordinary Americans and their representatives.

The greatest irony of all is that the special interest groups warning us that if states and local governments are given more control over lands and resources they will ‘sell off our public lands,’ are in fact, encouraging and enabling big corporations to buy influence and power within the agencies claiming stewardship over those public lands. As corporations and government cozy up together to expand by millions the number of acres under federal control, there is little, if any room left for the public to have a say about what happens to America’s most treasured places.