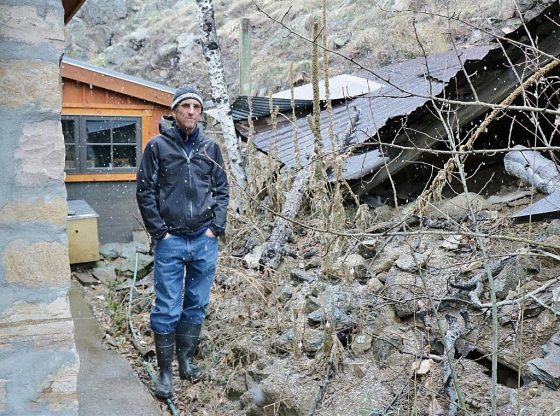 The BLM passed him from employee to employee and office to office but never took any action to remove or stabilize the shed. In March of 2016, just as Mr. Whited feared, the shed collapsed causing heavy debris, including concrete and boulders, to cover the walkway adjacent to his house.

In 1985, Michael Whited moved cross country from Alabama to Colorado. After a decade, Mr Whited purchased a modest home in idyllic Fourmile Canyon where he and his wife have lived ever since. This area of Boulder County, Colorado was heavily mined from the mid-1800s through the early 1900s. The canyon’s steep hillsides are covered with pine and aspen, the stream flows fast, furiously, and noisily downhill, and the Rocky Mountains loom in the background.  It has its challenges, such as fire dangers, world-class snow falls and unpaved, narrow, and winding roadways. The worst problem, however, is dealing with one of the small community’s neighbors, the federal government.

Mr. Whited’s closest neighbor is the federal Bureau of Land Management (BLM), on whose property stood an old stone and concrete mining shed. The shed was built directly into the hill- side, less than six feet from Mr. Whited’s house. In 2011, Mr. Whited, a mechanical engineer, recognized that the shed posed a hazard to him and his property, so he asked the BLM to remove the shed or at least sell him the small piece of land beneath the shed so he could remove or stabilize it himself. The BLM passed him from employee to employee and office to office but never took any action to remove or stabilize the shed.

In March of 2016, just as Mr. Whited feared, the shed collapsed causing heavy debris, including concrete and boulders, to cover the walkway adjacent to his house. In addition, the collapsing shed uprooted trees from the BLM’s property and drove them into the back of his house and into the electrical panel, which sent off sparks, creating a risk of an electrical fire.

Despite Mr. Whited’s numerous pleas, the BLM has refused to take any action to address even the most significant safety hazards caused by its failure to maintain its land properly. Instead, he has been forced to expend his own time and money to deal with those issues. Mean- while, portions of the shed remain collapsed on Mr. Whited’s property because it would be futile for him to remove the remainder of the shed himself. The shed is built directly into the hillside, which is located entirely on the BLM’s land and must be stabilized to prevent further damage to Mr. Whited’s property.

Instead of taking responsibility for its mess, the BLM outrageously declared it “has no ownership of the [shed] on public land” but that he has permission to “remove any of the structure that is on your property as well as any of the structure where encroachment onto your property is imminent.” The agency also warned him, however, that he could not construct a retaining wall on or enter upon BLM-managed land without paying for a BLM right- of-way. Thus the BLM expects Mr. Whited to foot the bill for its neglect. Days ago, MSLF filed a lawsuit on Mr. Whited’s behalf to obtain compensation and to force the BLM to act like any other landowner, that is, to maintain its property in a reasonable and safe manner and to prevent hazards on its property from harming neighbors.

Click on this link for more information and photos of the damaged property.