BLM dumps ‘experimental’ survey method on Alaska that will be costly for state, private property owners

State officials are blasting the U.S. Bureau of Land Management for implementing an experimental surveying method in Alaska during the Obama administration’s final days.

The state says the BLM surveys will inflict economic pain.

The federal agency said this week it was launching its new approach to land surveying in Alaska. Surveys are still required for about 35 million acres of the 106 million acres the agency has been in the process of transferring to Alaska since it became a state in 1959.

The effort has dragged on for decades because BLM has flown survey teams into the Alaska wilderness for weeks at a time. The squads hack through brush and frozen tundra to install small metal monuments that mark the land at 2-mile intervals.

Now, the agency wants to rely primarily on satellites and GPS to mark boundaries, a method that would initially be used in Alaska for eventual use elsewhere in the nation, BLM officials said.

The approach, known as direct point-position survey, would sharply drop the number of monuments the agency needs to install, by 80 percent in some areas.

The goal is cutting government costs in half — saving $60 million or more — and completing surveys in 10 years instead of 20 or more. The change will enable the state to more quickly take ownership of lands, said Neil Kornze, BLM director.

“I think Alaskans want to have the land that’s due to them sometime short of a century after they became a state,” Kornze said, speaking by phone from North Carolina during a break from vacation.

In a letter to Gov. Bill Walker sent Monday, Kornze said the agency was pulling out of agreements with the state spelling out survey methods. That includes a 1973 memorandum of understanding, when Kornze said BLM voluntarily agreed to place markers every 2 miles along townships, the 36-square-mile tracts used in surveys.

Jennings and other state officials said the federal agency appears to be misrepresenting key issues, including in Kornze’s letter to the governor in which the BLM director said the National Society of Professional Surveyors reviewed the proposed change and found “no significant technical issues.”

In fact, the Nov. 14 review by the trade association, done at the request of the BLM and state, concludes the new method “fails to protect the rights” of Alaskans and will place a “significant burden” on them. The review said the proposal also doesn’t meet the nation’s fundamental surveying principle — that monuments on the ground, not satellites in space, determine the legal location of a land parcel.

Part of the problem with the new method is GPS coordinates don’t always give the same location on the Earth over time as a result of factors such as seismic activity and tectonic plate movements, state officials said. As the continent drifts, the relative locations of two monuments may stay the same, but their precise location from space may change.

As the report puts it: “Tectonic activity changes the relationship between a point in space and a point on the ground.”

“The best way to have certainty of location is to have a monument in the ground,” said Brent Goodrum, director of the Alaska Division of Mining, Land and Water.

The Nov. 14 review found “end users” who eventually receive land from the state, such as private landowners or municipalities, will still need to set monuments. The new method will require new regulations in Alaska, as well as training for surveyors, title companies and banks that require “demonstrated site control.”

Those changes will require extensive costs and time, the review found.

Kornze said he believes the substance of the review presents a different view from the conclusion. In his view, that analysis, and another review by the National Geodetic Survey, the federal agency managing the national coordinate system, found no “fundamental obstacles” to the change.

The opportunity to reduce the costs of government surveys in Alaska and eventually in the rest of the nation is too large to pass up, he said. The new method will require innovation and a lot of effort, but the state and agency can resolve those issues if they can start working together again.

Kornze said he wasn’t trying to force the change through before President Barack Obama leaves office Jan. 20, and the Donald Trump administration takes over.

“Three years of earnest conversation and engagement with the state is not rushing,” Kornze said.

Kornze, who became BLM director in 2014, said he realized early on Alaskans were eager to see the surveying completed so the state can take ownership of the lands, leading him to seek advice from experts on more efficient approaches. This change will allow the state to more quickly take advantage of the economic benefits tied to land ownership, he said.

But Andy Mack, Alaska Department of Natural Resources commissioner, said in a statement land can already be transferred to the state and used for economic activities, then surveyed later. He said the state was disappointed BLM had chosen to “unilaterally deploy” the new technology.

Mack said the biggest hurdle to state entitlement of its lands are “outdated” public land orders by the federal government preventing the state from capitalizing on economic opportunities on valuable lands.

The federal withdrawals affect more than 4 million acres for which the state is seeking title. That includes much of the 800-mile trans-Alaska pipeline corridor, which the state has sought to own for decades, state officials said.

State ownership would allow sections of the corridor to be used for such things as a service station pullout for freight trucks along the Dalton Highway to the North Slope oil fields, providing revenue opportunities to state and local governments and private businesses.

The state would control permitting and the project could avoid the time-consuming national environmental review process required by BLM, state officials said.

“Until those obsolete withdrawals are lifted, Alaska is simply hamstrung in our efforts to get our full land entitlement,” Mack said.

Mack said the state will work with congressional leaders and the incoming Trump administration on surveying methods both sides support.

Kornze said BLM would like to resolve the issue with the state. But it will require additional money, perhaps in the form of fresh funding from Congress or savings generated by the new surveying project.

“If someone else wants to know how we can save $3 million a year and continue improving the quality of work we’re doing, I’m all ears,” he said. 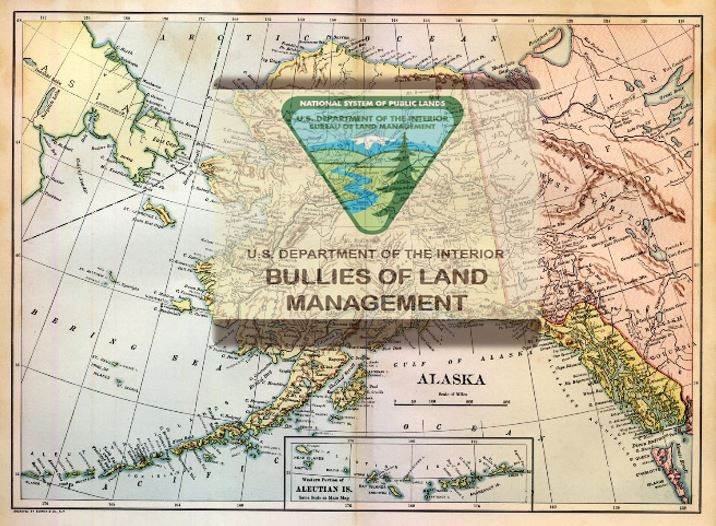