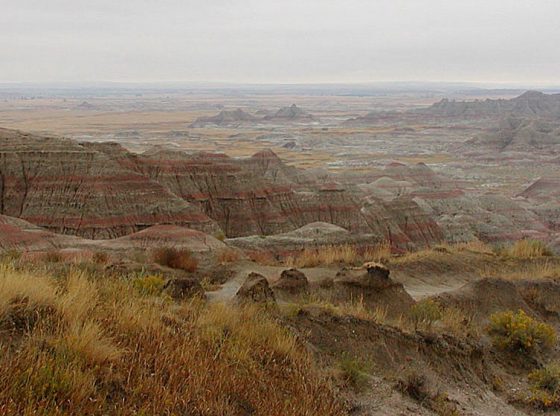 July 2016: another round up of Curtis’ cattle occurred. This time a little over 200 were taken, and many were left dead during the rush to round them up. The cattle were shipped to an eastern part of South Dakota and Curtis bought back his own cows. All this time he was still paying his grazing fees, and paying attorneys to help him keep his cows grazing.

Curtis Temple’s life long dream was to become a rancher. At the age of 22 he was given 15 head of cows by his father, Douglas Temple, for his work on the ranch, and his dream began.

Now, back on the ranch in 1945, they struggled to continue their dream of ranching, and in late 1999 the ranch was turned over to Curtis by his father, Douglas Temple. This was what Curtis had worked for his whole life. Now, he could continue the same dream of his grandfather and father.

By the year of 2012 Curtis had over 1500 head of cattle, and besides the ranch he owned, he was also leasing over 60,000 acres of public land bordering the Bad Lands national park on Indian reservation.

2013 was the year things started to turn bad for Curtis. The federal government decided to give the lease to another rancher, and trespassed him off the land with notice. He appealed this action and fought for his right to keep his cows grazing. He had made thousands of dollars of improvements and he wasn’t supposed to be able to lose his grazing rights without voluntarily releasing them.

Now, things went from bad to worse. The federal government decided to propose making this grazing allotment part of the national park, and introduced an endangered species: the black footed ferret.

By May 2015, without a court order, the federal government hired contract cowboys to round up his cows. They rounded up 138 cows. But, unable to sell the cows at any livestock auction barns in South Dakota (because they refused to accept stolen cows), the federal government shipped them over state lines to Gordon, Nebraska. But, there encountered the same problem were the auction barn wouldn’t accept them to sell, but did allow the cattle to be keep in the feed lot until a decision could be made. In short, a veterinarian was brought in and all of Curtis’ cattle were diagnosed with a disease and he was never paid for them, nor saw them again.

July 2016: another round up of Curtis’ cattle occurred. This time a little over 200 were taken, and many were left dead during the rush to round them up. The cattle were shipped to an eastern part of South Dakota and Curtis bought back his own cows.

All this time he was still paying his grazing fees, and paying attorneys to help him keep his cows grazing.

April 2017: the federal government arrested and charged Curtis Temple of depredation of federal land on a Indian reservation saying his cows scratched the surface of earth.

He is now awaiting an unknown trial date. He is facing 20 years in prison, and since he has been charged with a felony he can’t own a gun.

Unless Curtis can get some help his dream may be over for good.

Curtis Temple at the capital in South Dakota

Porcupine man pleads ‘not guilty’ to depredation of government property

Historical Spirit and a Cattle Dispute